The capitalist system must maintain inequality as a function of the drive for profits.

JAYNE AND Charles have a lot in common--except for pretty much everything.

Jayne DeWitt began working at the Georgia Pacific paper mill in Bellingham, Wash., in the 1970s. When it closed down in 2001, she made a 136-mile roundtrip commute to work for Kimberly-Clark in Everett. That mill closed down last year. The 64-year-old should be thinking about retirement. Instead, she's looking for a new job.

Charles Koch also has a history at Georgia Pacific--he owns it. Along with his brother and fellow ultraconservative libertarian union-buster David, Charles runs the multibillion-dollar Koch Industries. Forbes magazine put the pair at the Number 41 spot on its list of the world's most powerful people, a couple positions above North Korea's Kim Jong-un.

That picture is one way to understand the scale of the gap between the rich and rest of us in the U.S.--a gap that has been growing larger and larger over the last four decades. Another way is the numbers. 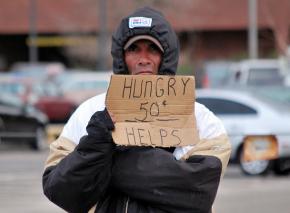 According to journalist David Cay Johnston in an article written for the Tax Analysts website, the average income for the top 10 percent of Americans (after adjusting for inflation) rose by $116,071 between 1966 and 2011.

The rest of the population--the other 90 percent--made out differently. Our incomes grew on average by $59.

Johnston also points out that as the economy recovered, incomes and tax revenues grew between 2009 to 2011. But a whopping 149 percent of the increased income went to the top 10 percent. For the bottom 90 percent, income fell in those years.

In other words, if we're experiencing an economic recovery, as the media endlessly claims we are, it's a recovery at the expense of workers and the poor.

For Blacks and Latinos, the gap is even starker. According to the Urban Institute, as of 2010, white families earned on average about $2 for every $1 that Black and Latino families earned--a ratio that has remained roughly constant for the last 30 years.

This statistic by itself is a shameful enough comment on our so-called "equal" society. But it's not as bad as the Institute's other findings. When the Urban Institute measured wealth, rather than income--which includes factors like insurance, tuition, homes and savings for retirement--it found that before the recession, non-Latino white families were about four times wealthier than non-white families. By 2010, they were about six times wealthier.

WHEN THE Great Recession took hold in earnest--detonated by the crash on Wall Street in the fall of 2008, and the economy started crashing--the solution of the economic "experts" was to pump money into the coffers of Corporate America--bailouts for the bankers, and big tax giveaways to corporations. Rather than this wealth "trickling down" to workers, there's an ever-growing reservoir gathering at the top--because while U.S. business has returned to record profitability, they aren't sharing it with workers.

On the contrary, the drive to squeeze more from fewer workers has only accelerated. Despite the fact that U.S. workers are 30 percent more productive than they were a decade ago, their wages have stagnated or worse.

Some of the bonanza for Corporate America is sitting around unused--U.S. companies are sitting on a cash hoard variously estimated between $1.4 trillion and $5 trillion, depending on how you count the cash.

But plenty is being put to use--or, more accurately, to non-use. According to the New York Times, the Wall Street banks and investment firms are back to gambling on the same complicated "structured financial products," like collateralized debt obligations, that brought the world financial system to the brink of Armegeddon in 2008.

"Banks are turning out some types of structured products as fast or faster than they did before the bottom fell out," reported the New York Times. "So far this year, for instance, banks have issued $33.5 billion in bonds backed by commercial mortgages, slightly more than they did in early 2005, when the real estate market was flying high, according to data from Thomson Reuters."

As analyst Tad Philipp told the Times, "The players in the business are generally the same as they were before. Because it's the old players, they know how to push the boundaries."

And if the return of casino capitalism on Wall Street wasn't enough to illustrate the upside-down priorities of the system, then there's the fact that the wealthy aren't satisfied with the gap between rich and poor at the current record levels. They want more--and they want workers to do without so they can get it.

Research by three Northwestern University political scientists that New York Times columnist Paul Krugman cited in a recent article illustrates how the views of the extremely wealthy diverge from the rest of us, especially around basic economic questions for the rest of us, like jobs and social programs.

IT'S PRETTY obvious, but we'll say it anyway: The super-rich think differently than we do. But this isn't merely because someone like David Koch is a jerk who despises the working class--though that's true. The bigger point is that the capitalist system is organized to make the rich richer and richer, at our expense.

The great U.S. socialist leader Eugene Debs called capitalism "a social order in which it is possible for one man who does absolutely nothing that is useful to amass a fortune of hundreds of millions of dollars, while millions of men and women who work all the days of their lives secure barely enough for a wretched existence."

The numbers today may be greater than anything Debs could have imagined a century ago, but the inequality he observed is still around--and flourishing.

Inequality is at the heart of capitalism because the central dynamic of the system is the scramble for profits by a minority ruling class that controls the product of the labor of the vast majority.

Because profits come before human need, capitalism is just as liable to devote resources to destructive ends as constructive ones. If there is money to be made off producing life-saving medical technology, then the capitalists will produce that. But by the same token, if it's profitable to produce the weapons that kill ever-more people more effectively, then Corporate America will go about producing the "supply" to meet that "demand."

Along with these warped priorities comes a warped ideology, with an army of "experts" to explain why this is all perfectly normal. Taking their cue from the "conventional wisdom," politicians chastise the poor for their poverty and compliment the wealthy for their skill in accumulating wealth, no matter the source of their riches.

The same upside-down logic is applied throughout society. For example, the supposedly evenhanded U.S. criminal justice system harasses and warehouses the poor and working class, with a disproportionate number of its victims being Black and Latino--while CEOs and government officials responsible for workplace injuries and deaths go free.

And millions of people go without a home or food in a country where foreclosed homes stand empty and the production of food is strictly limited because it isn't profitable to produce enough for everyone who needs it.

Hunger, homelessness, environmental devastation, poverty, crime--these are not aberrations under capitalism, but the hallmarks of a society that must maintain inequality as a function of the dynamic at its very core.

By contrast, the most basic promise of a socialist society, run democratically by the working majority, is a world where profit is swept aside in order to devote all the resources of society to meeting human needs.

On June 27-30, left-wing thinkers and activists from around the country and the world will meet in Chicago for Socialism 2013, a long weekend of discussion and debate about our ideas and strategies for winning a new world.

Participants in the struggles against low-wage employers, rank-and-file activists organizing for strong unions, students coming together against budget cuts, victims of police brutality and their families standing up to the New Jim Crow, activists speaking out against sexism, anti-LGBT discrimination and racism--all will be at Socialism to talk about the struggle today and the fight for a future where inequality and injustice is abolished.

We hope you'll be there, too.