How do we build the fight we need?

Socialists and other activists can take advantage of the opportunity presented by the October 2 "One Nation" rally to put forward our solution to the crisis.

THE LAST time that crowds of people descended on Washington, D.C., for a rally, it was mainly Tea Party supporters coming to see their hero Glenn Beck.

Beck's "Restoring Honor" demonstration--held, to add insult to injury, on the anniversary of the 1963 March on Washington--was an infuriating symbol of who's setting the agenda in national politics today: The furthest right elements of the Republican Party, while the GOP establishment panders to bigotry, and Barack Obama and the Democrats concede at every step.

But next month will bring an opportunity to send a different message--and give voice to the real concerns of U.S. workers. More than 150 labor unions, civil rights groups and community organizations have joined the call for a "One Nation" march on October 2 to demand good jobs, equal justice and quality public education for all.

Even though the event is obviously timed for unions and liberal organizations to get out the vote for Democrats in the November elections, this rally has the potential to be a place where workers come together to challenge the lies and scapegoating of the right--and draw attention to their demands. 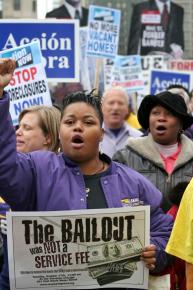 Gresham says that his 350,000-strong health care union will mobilize tens of the thousands of members from the East Coast. The AFL-CIO has joined the call for the rally, and organizers say as many as 3,000 buses are reserved from New York. The Communications Workers of America and American Federation of Teachers say they will mobilize their members.

Other sponsoring organizations include the National Council of La Raza and Rainbow PUSH. United for Peace and Justice and other groups are building for a showing of antiwar forces.

The rally certainly comes at a time when many people feel the urgent need to speak out. As Sabrina Greenwood, a mother of four who was laid off from her job as a transit station agent just before she was to be vested, said at a New York City rally to kick off organizing for October 2:

For five years and sometimes five, six days a week, I gave up my weekends and holidays with my children. I worked all hours of the day and night, summer, winter, spring and fall. While the city slept, I worked. While the city went to sleep, I still worked. And what did I get for my dedication? No service package, no gold watch, not even a goodbye, just a pink slip.

Greenwood's words speak to the desperate conditions facing tens of millions of workers across the U.S.

This week, the U.S. Census Bureau will release statistics for the percentage of Americans living in poverty--as measured by the pitifully low standards of the official poverty line--and commentators are expecting the number to leap from 13.2 percent in 2008 to as high as 15 percent for 2009.

A growing number of workers are jobless--and for longer than ever before. Last year, official unemployment averaged 9.3 percent, with workers unemployed for more than a year and a half making up on average a third of the jobless. Despite this, senators stalled for over a month this summer before they passed a bill extending benefits beyond 26 weeks.

The Republicans are driving the anti-worker agenda in Washington and leading the charge against social programs. But Barack Obama and the Democrats fully deserve their share of the blame.

Obama took office last year with the economy still reeling from the financial meltdown of 2008, but his administration adopted the Bush administration's bailout of the Wall Street banks with barely a difference. Yet for homeowners facing foreclosure because of the crisis manufactured on Wall Street, the Democrats couldn't manage even a fraction of the funds laid at the feet of the banksters.

Nevertheless, getting out vote the vote for the Democrats will be the main message from the front on October 2. As the AFL-CIO Executive Council said in its statement of support for the rally:

The "One Nation" march on Washington on October 2, 2010 will charge up an army of tens of thousands of activists who will return to their neighborhoods, churches, schools and, especially, voting booths, with new energy to enact our common agenda.

And on the same day, the labor movement will walk door-to-door in targeted states around the country, bringing the same message to union members exactly one month before the fall elections.

With the slogan "winning the change we voted for," organizers hope to reignite some of the enthusiasm and hope that existed among millions of people during Obama's presidential campaign in 2008. But for the most part, fear of what the Republicans will do if they make big gains in Congress--which is the likely outcome--is the only reason Democrats can offer for why anyone should vote for them.

But taking aim at the Republicans only explains part of the problem facing workers. When the Democrats lose in November, they will have only themselves to blame. Even with the biggest majority in Congress in a generation and control of the White House, the Democrats have refused to fight on any number of fronts where they could have proposed policies that would have improved the lives of working people.

The list of the Democrats' betrayals is long: From the Employee Free Choice Act, gutted in the face of an offensive by Corporate America before it even came to a vote in Congress; to the endless concessions to the insurance industry on health care legislation; to the refusal to speak out against the racist scapegoating of immigrants and Muslims; to the continuation of Bush-era policies on war and occupations abroad, and the war on civil liberties at home.

The Democrats say they represent working people, but their actions in office during the past two years prove that their real priority is defending the interests of Corporate America, Wall Street and the political status quo.

HISTORY TEACHES us that the biggest changes in society came about not because the right politicians got elected into office in Washington, but because people organized to fight for them.

Franklin Delano Roosevelt gets the credit for New Deal reforms like the right of workers to join unions and the Social Security retirement system, but the truth is that he was forced to act by a massive working-class upsurge. John F. Kennedy and Lyndon Johnson supported civil rights legislation that put an end to segregation, but only because the civil rights movement made it impossible for the Jim Crow system to continue in the old way.

As the great historian Howard Zinn said, "There's hardly anything more important that people can learn than the fact that the really critical thing isn't who is sitting in the White House, but who is sitting in--in the streets, in the cafeterias, in the halls of government, in the factories. Who is protesting, who is occupying offices and demonstrating--those are the things that determine what happens."

Criticisms of Democratic Party policies won't be heard from the speakers at the "One Nation" march on October 2, but they will surely have resonance with many of the people who will travel to Washington to demand the kind of action that can help working people today--the very policies the Democrats reject.

Socialists and other activists can take advantage of the opportunity presented by October 2 to put forward our solution to the crisis. Several socialist groups are coming together to plan for a united contingent at the rally to put forward an independent agenda.

We want money for government programs that will create good, union jobs. We want real heath care reform. We want a bailout for workers suffering the effects of the mortgage crisis, and we want our public schools to be saved from the budget-cutters and the privatizers. And let's take the money from where it's being wasted--not schools and food stamps, but from war spending and corporate welfare.

Our message of solidarity and unity is of utmost importance today. The right wing has unleashed a torrent of fear and hatred against immigrants and Muslims that could get a wider hearing if it isn't confronted.

It's our job to speak out against the racism and Islamophobia designed to divert attention from the real sources of the crisis. We stand with Muslims at the site of the planned Islamic community center in New York City, and we stand with the undocumented against the anti-immigrant SB 1070 law in Arizona.

We can help build an organized, active counterweight to the politics of hate and bigotry that Glenn Beck and Sarah Palin are peddling, and that the Democratic Party refuses to confront--a political alternative that puts the interests of working people first.