What the California wildfires should teach us

When wildfires struck again in drought-plagued Southern California in mid-May, the media were filled with analysis about their causes and reports about the government's massive response. But other disasters--this year's wildfires in West Texas, for instance, which have been many times more destructive--get a fraction of the attention.

Mike Davis, author of Ecology of Fear: Los Angeles and the Imagination of Disaster and In Praise of Barbarians: Essays Against Empire, talked to Alan Maass about the class dynamics behind the different faces of disaster response--and the mad priorities of a free-market system that does exactly the wrong thing for working people and the environment.

WHAT SHOULD we know about the wildfires that grabbed the media's attention in mid-May?

AS DISASTERS become more frequent across the country, it's clear that the ones that affect celebrities and wealthier people take the foreground, and push the others into the margins.

But the situation with the most recent Southern California fires was extraordinary--you had 23 Marine helicopters, dozens of other firefighting aircraft, fire departments from all over the state, federal fire agencies. The message being sent to the people who live in their McMansions in the midst of the chaparral or the housing developments recently inserted into the back country is: Don't worry, you can count on us.

The wildfires in Southern California are some of the most destructive in the state's history--particularly the ones in San Diego County in the last decade, where several thousand homes were destroyed. But the message being sent is to keep building--because we can beat fire.

This is not only paradoxical, it verges on insanity. If I were to take you for a drive, for instance, to many of the areas that burned down in 2003 and 2007, not only would you see every structure rebuilt, but usually rebuilt larger in scale. And there are hundreds of additional new homes--usually super-sized McMansions, sitting on mountaintops and right in the heart of the thick brush. 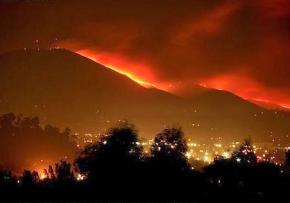 But the developers and owners of these homes have convinced themselves that they deserve every bit of fire protection available. They've become intoxicated with the belief that if you clear enough brush around the site, the homes are invincible.

This illustrates two things. First, the extravagant resources that wealthier homeowners in these areas expect to rely on--without paying for them, because in the past, they rejected efforts to consolidate fire departments or raise the budget to hire more firefighters.

And second, that these fire disasters, at least here in Southern California, teach all the wrong lessons. Instead of prompting debates about controlling growth, particularly the developments with these very large-scale homes in vulnerable areas, each fire deepens the conviction that people can be safe, and development can continue.

That conviction ultimately rests on the fact that fire insurance is cross-subsidized--that people who live in these homes in the newly developed areas are effectively subsidized by other people who buy fire insurance for homes in areas that have no wildfire risk.

This is a continuation of a mode of development that will generate bigger and bigger disasters--and what's being created in its wake is a triage of public resources.

If you live in the city, your fire protection doesn't depend on Marine Corps helicopters. You can't expect the federal government to intervene. What happens to your home is a straightforward function of the budget of your local fire department, which is probably in crisis.

But people who live in these new suburbs, and especially those who live in big homes in the country, have a kind of unwritten contract that they'll get all the fire-fighting resources available. And with the next wildfire, this will likely be more of a crisis. The fires in May fires were all in the same county, and more or less in the same area. But when you have two or three fires going, how are you going to allocate resources and equipment?

So the root problems here are uncontrolled development and the shifting of the cost of insurance, rebuilding and fire fighting onto other taxpayers--who, of course, can't expect this level of fire protection.

WELL, THE drought, which may be on the scale of a 500-year event, does fit exactly into the kind of pattern you would expect from climate change. But there would be a problem even without global warming caused by industrialization and cars.

All the basic treaties--like the Colorado River Compact, which allocated water rights from the Colorado--and all the planning about water resources are based on a fundamental error. The water supply was figured on the basis of records from the early 20th century, which turned out to be one of the wettest periods in California history. We've now known for about 20 years that there were droughts on the current scale and even larger, probably in the 16th century, and definitely in the late Middle Ages.

So whether you come at it from the perspective of climate change, or you look at the long-term environmental record, the problem of a sustained drought shouldn't be surprising. Indeed, some researchers are now talking about this being the "new normal"--where the climate has shifted into a much hotter and drier phase.

That's all the more reason to restrict development in areas that are the most fire-prone--but the exact opposite is happening.

We see the same kind of contradiction on an even larger scale with the Gulf Coast and the Atlantic Seaboard--with the rebuilding of homes in first-class hurricane zones, where one can predict pretty confidently that events like Superstorm Sandy will become more and more frequent. And there, the costs of rebuilding are absolutely staggering.

The more rational response would be to stop this kind of development--even in some places reverse it. I think people on the left have to pay a lot more attention to these issues: disasters, land use and the kind of staggering costs that are being passed on to working class taxpayers, to defend second homes or luxury homes, located exactly in the path where we can expect extreme events taking place with increasing frequency.

The drought out here is, of course, continuing. Everybody expects it's going to be broken by an El Niño next year--and, of course, with the rainfall from that, you could see massive landslides and flooding in the areas that burned. But after the El Niño, we could well go back to this same kind of drought.

No one has any idea how long these kind of conditions are going to last. Some scientists believe that this period represents a kind of fundamental shift--something similar to what's going on in the Mediterranean region, especially in the Middle East. This is an invisible factor behind what's taken place in Afghanistan and Iraq and Syria, which have suffered years of a devastating drought that has almost destroyed small-scale agriculture in many areas.

HOW SHOULD activists who are concerned about development and ecology and the kind of issues you're talking organize and mobilize politically?

FIRST OF all, with the recognition that the ultimate limit to the effectiveness of any kind reform is the marketplace in land. As long as a society has no control over land values, it can't really control land use, and that's the source of these questions.

This was the point that Henry George was making back in the 19th century. Until the 1890s, George was probably the best known prophet of social reform, not Karl Marx, and even though his theories segued into a kind of monomania, he was absolutely right to understand that speculation in land and the inflation of land values was a brake on production. What he didn't write about at the time, but became clear in the 20th century, is that these same issues destabilize or undermine any ability to plan rationally.

If you look at Canada, for instance, in a lot of cities, the metropolitan government owns belts of land on the outside of the city, which gives it some degree of control over the form that urban development takes. In the U.S., the only function that regional planning commissions and the like play is to see which politician is going to get the largest campaign contributions for releasing more land for development.

Essentially, nothing has changed. For all the talk about smart growth and all that, the same kind of unfettered development capitalism has characterized Southern California since the 1920s.

I'm not sure outside the state of California quite realize the impact of the Brown administration or what the Democrats are doing in Sacramento. Brown has basically adopted the Republican politics of banking tax revenues for a so-called "rainy day fund," rather than restoring the lifeline of human services that were cut in the Schwarzenegger years. What you see in Sacramento is really almost total paralysis of action around the big issues.

Now, Brown is under pressure to give way on questions of water transfers from the north of the state to the south. But this highlights how the whole system of water rights and water distribution in the American West if breaking down, as a result of changes in climate and insane patterns of urbanization.

My campus--the University of California Riverside--is on the edge of the desert, 50 miles or so inland from the coast. I've spent seven years now writing letters to different chancellors asking them to simply kill our huge campus lawns, and I've gotten no response whatsoever.

And if you can't get university campuses to demonstrate the need for better water use, that's obviously a problem. The private marketplace will definitely be worse. To the east and south of Riverside, in the Coachella Valley, there are 110 golf courses--right in the middle of the desert. Go figure how that makes sense.

As long as everything is driven by the needs of the wealthy, their desire to escape the city and their ability to commandeer public resources so no one else can, nothing will change. On the contrary, as Republicans shrink city and county and state budgets, the conflict is over whose needs get taken care of first--and I think we all know the answer to that.

The real solutions to urban crises have to come through public ownership and the suppression, or at least very strict regulation, of land price inflation and land use.

I think in California, you can see a very clear need for the labor movement to become more involved in issues of housing, urban development and the growing costs on the rest of society for sustaining exurban development, particularly the flight of the rich to their enclaves.

Historically, of course, the labor movement has always been undermined on these issues by the fact that construction unions represent a conservative voice, opposed to any limitations on urban redevelopment or home building on the edge of metropolitan areas. But now that public-sector and white-collar unions have a greater weight, you can see how these issues have become almost as fundamental to their memberships as wages and health care.

People can't afford to rent even the smallest apartment in the coastal area of Los Angeles, so they're forced to move inland 40 or 50 or 60 miles, and then commute to work. That takes a huge toll on their family lives, it increases auto use and congestion, and helps drive the horizontal expansion of the city, which will become more and more expensive and destructive every year.