Jesse Sharkey, a Chicago Teachers Union delegate from Senn High School, reports on the attacks on public schools and the deepening crisis within the union.

CHICAGO--As school let out for the summer, teachers at six public schools--Orr, Harper, Copernicus, Fulton, Howe and Morton--were dealing with the fact that their jobs are gone.

They are the latest victims of school "transformation," the favored term of Chicago administrators for firing virtually the entire faculty.

"According to my opinion," wrote one delegate in the Chicago Teachers Union (CTU), "we are facing an attempt to destroy the public school system. Remember, you are safe today, but tomorrow, you could be displaced...I strongly believe we should be united and not let the outside forces to destroy the union."

Despite this warning and an increasing number of teachers worried about the future of public schools in Chicago, non-union school reform is picking up speed, with 21 new schools set to open in fall of 2008. The latest report from the Office of New Schools crows, "Renaissance 2010 is on track to exceed our goal of 100 schools." Of these, 65 are charters, none of which are unionized in Chicago. 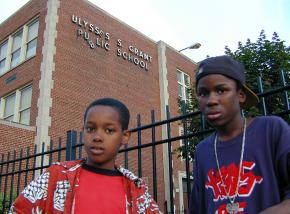 Unfortunately, the CTU finds itself in an internal crisis. CTU Vice President Ted Dallas and President Marilyn Stewart--former allies in the United Progressive Caucus--are on opposite sides of a nasty fight that has spilled into the courts and onto the front pages of Chicago newspapers.

The split has been in the works since late last year, but came to a head June 12 as Dallas faced a trial in front of the CTU executive board for charges of bringing the union into disrepute. He obtained an injunction from a judge on the grounds that the charges against him were not properly brought, meaning that he will likely be recharged and retried.

If he is found guilty, he faces expulsion from the union. There is no provision in the CTU's constitution for removal of an officer.

Dallas is accused of charging expensive dinners to the union, signing checks to himself and others without approval from other officers, making photocopies of anti-leadership propaganda on union photocopy machines, and going to union meetings in the schools and attacking the leadership or undermining their policies.

Members of the union leadership see Dallas as a cancer that must be removed. Privately, they paint a picture of a person who was power-hungry and unprincipled--with whom it became impossible to run the office.

For Dallas' defenders, the attacks are an attempt to deflect attention from leadership's own failures: rampant school closings, transformations, union budget problems and general incompetence. Debbie Lynch and the Proactive Chicago Teachers (PACT) caucus oppose Dallas' removal and have used the split as a chance to put forward their own critiques of the CTU leadership.

Unfortunately, there doesn't seem to be any way out of this conflict--the union's three main caucuses are at an impasse, and this battle seems destined for court. Only the lawyers will benefit. Meanwhile, the media and the bloggers are having a field day at the union's expense, as internal documents, venomous charges, counter-charges and court dates stack up.

THE IMPASSE in the union can be illustrated in another way. At the June House of Delegates meeting, Stewart presented her budget--a plan that corrects the CTU's current deficit by cutting millions from the union's spending, though it doesn't fully address concerns about transparency and staff salaries.

The union opposition came to the meeting to vote down the budget and hand Stewart a defeat. However, the question period was dominated by Stewart supporters who stacked the lines at the mikes, where they read scripted questions.

A series of procedural votes took place--an attempt to postpone the vote on the budget--and finally, the budget vote resulted in a call for division, a provision of Roberts Rules of Order that calls for the house to literally be divided into two sides.

In that kind of atmosphere, it felt like no one in the house was trying to do more than score sectarian points against the other side. Union delegates, who ordinarily sit intermixed without regard to caucus, ended the meeting literally divided across the room and shouting at one another.

Instead of a real discussion of how the union got into the mess it's in and the sharing of ideas about how to get out, the meeting degenerated into a scene that a teacher likened to the Jerry Springer Show.

This atmosphere demonstrates a serious erosion of basic union solidarity among the main caucuses in the CTU. Too few teachers are making arguments to each other, talking and listening. Too few people come to house meetings with a serious suggestion for how to move the union forward or a willingness to organize their coworkers to make things happen.

Partly in response to this need, we have formed a new group, the Caucus of Rank and File Educators (CORE). Our internal political divisions must not keep us from doing what we need to do to survive. One thing that we could do is meet in our areas to discuss our common challenges.

In Area 19, for example, several schools are being "transformed" with scripted curriculums and tri-weekly standardized tests. We should organize a meeting to answer a series of questions about what this will mean and how we should respond to it. In LA, for example, the teachers union took a strong stand on such scripted curricula.

Our union needs more activist members. We will attract and train those people when we begin to fight for our jobs and our schools, not fight each other.