Suicide, post-traumatic stress disorder and depression haunt hundreds of thousands of soldiers back from Iraq and Afghanistan. But as Eric Ruder reports, the U.S. government has tried to minimize the crisis.

A YEAR and a half ago, Scott Eiswert, a specialist in the Tennessee Army National Guard, returned from Iraq, only to face an escalating battle with post-traumatic stress disorder (PTSD). When he learned that his unit would deploy again soon, he felt he could no longer stave off the pain. On May 16, his wife Tracy and his three daughters discovered his body after he shot himself in the family's home.

Pfc. Jason Scheuerman left a note nailed to his barracks closet in Iraq. "Maybe finally I can get some peace," wrote the 20-year-old man. Then he stepped inside the closet and shot himself. His parents only found out about the note after a yearlong fight to cut through military red tape and discover what happened to their son.

Scott and Jason are just two of the thousands of military personnel whose service in Iraq and Afghanistan plunged them into a place so dark that they took their own lives.

In fact, the number of suicides among veterans who served in Iraq and Afghanistan now likely exceeds the number of troops killed in combat. 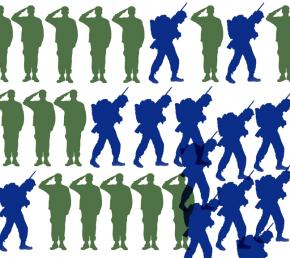 Nearly one in five soldiers deployed to Iraq or Afghanistan--about 300,000--report symptoms of PTSD or major depression upon returning home, but only about half seek treatment, according to a Rand Corporation study released in April.

Based on known suicide rates for similar patients, "It's quite possible that the suicides and psychiatric mortality of this war could trump the combat deaths," according to National Institute of Mental Health director Thomas Insel, who is the government's top psychiatric researcher.

But even more appalling than the human toll these wars are claiming even after troops leave the battlefield is the military's shameless cover-up of the extent of the problem--and its effort to deny veterans the health care they deserve when they return.

The Pentagon officially reports that about 30,000 troops were seriously wounded in Iraq and Afghanistan. But USA Today found at least 20,000 cases of traumatic brain injury (TBI) not reported by the Pentagon when the newspaper conducted its own study and filed numerous requests for data under the Freedom of Information Act.

The Rand Corporation's study "Invisible Wounds of War" compiles information on veterans suffering from PTSD, TBI and major depression. The Rand site also has links to pamphlets with advice for individuals and families trying to cope with post-deployment stress.

To find out more about the Eiswert family and how you can help, go to the E-4 Scott Eiswert Memorial Fund.

In "Disposable heroes," published in the International Socialist Review, Pham Binh covered the struggle of soldiers to get the government to devote adequate resources to compensating them for their service.

The Rand Corporation study found that 320,000 personnel may have experienced a TBI in Iraq or Afghanistan, but only 43 percent said they had ever been evaluated by a physician for the injury.

As for PTSD, the Pentagon officially acknowledges that 38,000 veterans have been diagnosed with it since 2003--so if the Rand study of 300,000 soldiers with PTSD is accurate, that means some 260,000 have either not sought treatment, not been diagnosed or simply aren't being counted by the military.

This isn't surprising, given the culture of denial that pervades the military and veterans health care system. In April, for example, an e-mail surfaced from Ira Katz, deputy chief patient care services officer for mental health at the Department of Veterans Affairs (VA), acknowledging that 1,000 veterans under VA care attempt suicide every month. On average, 18 veterans commit suicide in the U.S. every day, and four of those are veterans of the Iraq and Afghanistan wars.

"Shh!" begins the e-mail from Katz. "Is this something we should (carefully) address ourselves in some sort of release before someone stumbles on it?"

Another troubling e-mail from a VA official came to light in May. Norma Perez, a leading psychologist at a facility for veterans in Texas, wrote to staff members in March directing them to diagnose PTSD less frequently because PTSD patients can receive government disability payments for their condition.

"Given that we are having more and more compensation-seeking veterans, I'd like to suggest that you refrain from giving a diagnosis of PTSD straight out," wrote Perez in the message to mental-health specialists and social workers. Instead, she continued, "consider a diagnosis of Adjustment Disorder."

A diagnosis of adjustment disorder is considered less severe and isn't typically compensated like PTSD, for which veterans are eligible for disability payments of up to $2,527 a month, depending on the severity of their condition.

"It is outrageous that the VA is calling on its employees to deliberately misdiagnose returning veterans in an effort to cut costs," said Melanie Sloan, executive director of Citizens for Responsibility and Ethics in Washington, which released the memo to the media. "Those who have risked their lives serving our country deserve far better."

SCOTT EISWERT had stopped going to the VA for PTSD treatment before his suicide, and the disregard for vets under its care was one reason why, according to Stacy Hafley, an advocate for military families who is helping the Eiswert family get back on its feet.

"He didn't feel like it was helping," said Hafley in an interview. "He thought they were leaning toward saying that his issues were 'family problems,' and not PTSD. So he stopped going, which is fairly common and symptomatic of PTSD.

"I've heard it so many times, and my husband, who also suffers from PTSD, did the same thing. So many feel that the VA is either trying to overmedicate or understate the scope of the problem, and neither of those is particularly helpful. They get frustrated, leave and don't come back."

Hafley underscored the chief problem facing an understaffed VA: "The VA is trying to build a million-dollar home with a penny, and it can't be done," she said.

The VA has an annual mental health budget of $3.8 billion, which U.S. officials contend is a substantial amount. But the U.S. spends this much every 11 days to keep U.S. forces fighting in Iraq and Afghanistan.

In late June, Bush signed a new supplemental war spending bill, approved by Democrats and Republicans in both houses of Congress. The bill allocates an additional $162 billion of spending that will last into the middle of 2009, well into the term of Bush's successor.

While the bill increases spending on GI education benefits, it contains nothing for expanding the budget for military health care. "The recent war funding bill was passed to go clear through the spring of 2009, which was clearly a political ploy to not have to deal with war spending right before the election, given that both candidates are sitting senators," explained Hafley.

"I feel like they are playing political games with the lives of our loved ones. We shouldn't be tolerating that. This has been going on for years. These aren't new problems. These are the same problems that Vietnam vets have been facing for decades."

Hafley is right. Fighting wars by skimping on compensation for the soldiers who must fight them is a tried-and-true strategy of every commander in chief. Successive Democratic and Republican administrations stood in the way of compensation for Vietnam veterans struggling with PTSD and Agent Orange exposure.

The Clinton administration dragged its feet when tens of thousands of veterans of the 1991 Gulf War struggled to get compensation for the dizzying array of symptoms they were experiencing, such as frequent immune system disorders, birth defects, cancer, chronic fatigue, loss of muscle control, headaches, dizziness and loss of balance, memory problems, muscle and joint pain, indigestion, skin problems and shortness of breath.

Today, the military is employing a different arsenal to keep its overstretched military in the field at bargain-basement prices. "For the first time in history," according to a cover story in the June 16 issue of Time, "a sizable and growing number of U.S. combat troops are taking daily doses of antidepressants to calm nerves strained by repeated and lengthy tours in Iraq and Afghanistan.

"The medicines are intended not only to help troops keep their cool, but also to enable the already strapped Army to preserve its most precious resource: soldiers on the front lines. Data contained in the Army's fifth Mental Health Advisory Team report indicate that, according to an anonymous survey of U.S. troops taken last fall, about 12 percent of combat troops in Iraq and 17 percent of those in Afghanistan are taking prescription antidepressants or sleeping pills to help them cope."

CHRIS LeJEUNE, who returned home in May 2004, began struggling with depression while on a 15-month deployment to Iraq. The uncertainty about the mission itself weighed heavily on his conscience and contributed to his condition.

"When you search someone's house, you have it built up in your mind that these guys are terrorists, but when you go in, there's little bitty tiny shoes and toys on the floor--things like that started affecting me a lot more than I thought they would," LeJeune said.

When LeJeune sought counseling, he got a prescription for antidepressant and anti-anxiety medications, but not much else. "In the civilian world, when you have a problem, you go to the doctor, and you have therapy followed up by some medication," said LeJeune. "In Iraq, you see the doctor only once or twice, but you continue to get drugs constantly."

Adding to the frustration facing the loved ones of veterans seeking help is the unresponsiveness of every level of government to the crisis.

Seeking to break the logjam, two veterans' organization filed suit to ask a federal judge to order changes to how the VA delivers care to veterans. The suit sought redress for the lack of mental health care services, the long delays for appointments, and the four-and-a-half year backlog of cases in which veterans are appealing for a higher disability rating than was issued by VA doctors.

But the judge refused to grant the order, saying the plaintiffs were demanding nothing short of "a complete overhaul of the VA system."

Hafley can think of only one other measure that would work better than a complete overhaul. "Quite frankly," she said, "the best thing they could do to stop the overload at the VA is end the war, bring the troops home and stop creating more troops with PTSD who are at risk of suicide or having addiction problems. Adding more money into the VA does help the ones who are already home, but every day, new ones are being created.

"That influx is going to continue. Spending more money is just a temporary fix. They aren't stopping the bleeding. And that's the problem that brought us where we are now."