What happens after November 4?

Barack Obama's likely election will mark the end of a period of conservative dominance in Washington. But everything we know about him suggests he will remain a cautious, moderate politician.

WITH TWO weeks to go before the November 4 election, the Democrats are poised for a crushing victory.

The course is set for the election of the first African American president--a truly historic milestone in a country built on slavery. Less than half a century after the Jim Crow system of apartheid was finally overthrown in the U.S. South, a Black man is set to move into the White House.

And the Senate appears headed for a Democratic supermajority--at or near the 60 seats needed to override even a Republican filibuster, the stalling tactic historically used to block legislation.

To a conservative bastion like the Wall Street Journal editorial board, this is cause for panic.

"Though we doubt most Americans realize it, this would be one of the most profound political and ideological shifts in U.S. history," declared a Journal editorial. "Liberals would dominate the entire government in a way they haven't since 1965, or 1933. In other words, the election would mark the restoration of the activist government that fell out of public favor in the 1970s." 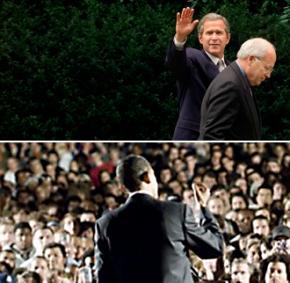 Among the horrors cited in the editorial: the likely passage of a Medicare-for-all health care program, rapid unionization under the newly enacted Employee Free Choice Act, higher taxes on the rich, and far tougher regulations on business.

What to the Journal is a nightmare will sound like a dream come true to tens of millions of workers.

The reign of George W. Bush--with tax cuts for the rich, endless war, violations of civil liberties, and now the worst economic crisis since the 1930s--is coming to a close. But will Obama really bring the kind of sweeping change that the big business fears--and that working people would welcome?

Certainly, there will be some important changes right away, such as a rollback of Bush's tax cuts for the wealthy. But a closer look at Obama--his vague promise of change, his record in office and his thoroughly establishment lineup of advisers--suggests that he would continue to be a cautious, moderate politician in the White House.

AT THE outset of his campaign, Obama tapped the energy of those who were angriest at Bush and the Republicans, and the most determined to fight for new political priorities. Legions of young volunteers gave Obama an edge over Hillary Clinton's well-funded political machine and allowed him to win in the role of outsider against the Clintonite business-as-usual crowd.

On the campaign trail, Obama evoked the history of social movements for civil rights and union organization, and occasionally tossed out progressive policy proposals, such as indexing the minimum wage to keep pace with inflation.

But as Obama pulled ahead of Clinton, he swung to the right, highlighting his big-name Democratic backers and dialing down the "movement" rhetoric. Thus, when Clinton made her scurrilous race-based appeal to "hard-working Americans, white Americans," Obama campaigned as the voice of the Democratic center. Rather than undercut Clinton's class appeal by laying out his own aggressively pro-worker agenda, Obama simply ran out the clock during the primaries.

Once he clinched the nomination, Obama lurched still more sharply to the right, taking a position on Israel-Palestine that was even more pro-Zionist than Bush, and promising right-wing Cubans that he would be a tough opponent of "Latin American "radicals." His plan for "withdrawal" from Iraq would leave tens of thousands of U.S. troops in that country, and he's vowed to dramatically escalate the war in Afghanistan.

On domestic policy, Obama reassured business by choosing as his top economic adviser Jason Furman, a supposedly liberal academic notorious for his defense of Wal-Mart's labor policies. And of course, Obama, while claiming to be a Washington "outsider," chose as his running mate Joe Biden, the consummate Senate insider.

Obama's middle-of-the-road approach opened the door to a John McCain comeback. Following the Republican National Convention, he and his running mate, Sarah Palin, the darling of the Religious Right, even moved ahead in some opinion polls.

That lead probably would have disappeared as voters became more familiar with Palin's hard-right politics and the ugly, racist crowds at Republican campaign events.

Instead, the Wall Street financial crisis reached a new critical stage, and it's been straight downhill for McCain ever since, as voters hold Republicans to blame for the financial panic. However much distance McCain and Palin try to put between themselves and George W. Bush, the Republican Party is increasingly seen as it was in the early days of the Great Depression under President Herbert Hoover--the people responsible for bringing you hard times.

As a result, Obama and the Democrats can ride an overwhelming tide of anger--and hope--into the White House.

But Obama doesn't deserve the vote of people who are committed to independent working-class politics and fundamental social transformation. The "change" he proposes is within strict limits that are acceptable to the corporate contributors to his campaign and the prominent political figures who endorse him, like former general and Secretary of State Colin Powell, who aggressively promoted the Iraq war that Obama opposed.

A big Democratic win won't necessarily mean "a period of unchecked left-wing ascendancy," as the Wall Street Journal would have it. The years 1933 and 1965 cited by the Journal as precedents for today were world-changing years not because of the presidents who took office in those years, but because of mass pressure from below--the stirrings of the working-class movement in the 1930s, and the civil rights movement of the 1960s.

A similar dynamic exists today. A big Obama win will raise expectations for change--but whether or not it is achieved depends on the level of politics, organization and struggle from below.