Antiwar organizing in the Obama era

Ashley Smith and Eric Ruder report on the debates at the national convention of United for Peace and Justice.

THE MAIN U.S. antiwar coalition, United for Peace and Justice (UFPJ), held its national convention in Chicago on December 12-14.

While the U.S. continues to occupy Iraq and is planning a major escalation of forces in Afghanistan and Pakistan, the conference drew only 248 attendees, fewer than at its convention last year. Such a low turnout should come as no surprise; UFPJ has not called a major national antiwar demonstration in close to two years and has invested the bulk of its forces either directly or indirectly in campaigning for the Democratic Party.

Obviously, the key question facing UFPJ and indeed the entire antiwar movement is how to deal with the new challenges and opportunities under the incoming administration of President-elect Barack Obama.

At the convention, the majority of UFPJ's leadership and featured speakers argued forcefully that the antiwar movement should credit itself for helping get Obama elected and be encouraged that we will now finally have an ally in the White House. 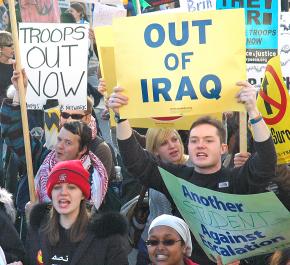 "We have elected the most progressive mainstream politician imaginable," declared William McNary, president of USAction/TrueMajority, at the opening plenary. McNary went on to describe Obama as our "quarterback"--and say that the movement's task is to "block" for him.

"But there are entrenched interests that surround him and surround Washington, that surround the White House, that want to see the agenda of the Bush administration continue...We have to be ready to address these obstacles...and provide the blocking that Barack needs."

Several attendees noted that talk of Obama appointing a "liaison" to the progressive community as an encouraging sign that the antiwar movement will likely enjoy increased "access" to the corridors of political power. Only Ali Abunimah of Electronic Intifada, who spoke on the Saturday evening plenary, dissented from the chorus of praise for the incoming administration.

But other delegates were concerned about this characterization of the Obama administration. "[We have] been the central peace and justice force in Pittsburgh for decades," said Paul LeBlanc from the Thomas Merton Peace Center. "We affiliated with UFPJ from the start, and we sent a sizable contingent to this conference. I think our delegation is concerned with what appears to be an uncritical attitude toward the Democrats."

No one would deny the enormous impact that Obama's election has had, inspiring workers and minority communities (especially African Americans), raising expectations for change and creating a climate in which a new movement for gay marriage is taking root.

But the antiwar movement must come to grips with the reality that Obama's Cabinet appointees and explicit foreign policy proposals are far from antiwar.

Obama has promised to retain tens of thousands of U.S. troops and private mercenaries after "withdrawal" from Iraq as a residual force to "provide security." He has also repeatedly promised to escalate the war in Afghanistan and continue supporting Israel's occupation of Palestine. He may conduct U.S. policy with more diplomacy and humanitarian aid than the Bush administration, but Obama's goals do not represent a break with decades of U.S. imperial policy.

These realities represent a challenge for the antiwar movement. Yet the convention marked a turn in UFPJ's past practice of focusing specifically on the war in Iraq. Now, UFPJ proposes to broaden out to highlight economic justice, racism and climate change, among a host of other issues.

"Only a new compact, a real compact with a handshake between social movements from the bottom up--especially the antiwar, economic justice and environmental movements--can begin to achieve a better, safer future and deliver on the truly radical promises of the Obama presidency," said Tom Hayden, former leader of Students for Democratic Society and now a Democratic Party activist.

But while it's important for all activists to address the connections between war and other pressing issues, the central project of the antiwar movement must continue to be organizing for the immediate end to the U.S. occupations of Iraq and Afghanistan. Otherwise, the antiwar movement is retreating from its core mission.

AN AD-hoc caucus within UFPJ presented two amendments to the coalition's proposed program document for the coming year--one on Afghanistan and another on spring actions.

The caucus emphasized different reasons to be hopeful about the incoming Obama administration--chiefly, that voters expect change and thus can be mobilized on the basis of such raised expectations. "I don't want to wait for the next Republican administration to complain about the problems with the war," said Meredith Reese, a member of the PDX Peace Coalition in Portland, Ore.

Unfortunately, the meeting spent far too much time on procedural questions and secondary issues in the discussion of the program, giving short shrift to the most important debate about what the organization would say about Afghanistan and the anniversary actions.

In the end, the proposal to incorporate opposition to the war in Afghanistan was approved. "UFPJ demands immediate and unconditional withdrawal of all occupying forces from Afghanistan," reads the amendment. "We will make this demand along with immediate withdrawal from Iraq the central focus of our organizing and actions."

UFPJ's leadership clearly didn't want to come out for immediate withdrawal, which puts the coalition explicitly at odds with the Obama administration's plans. But sensing that this was broadly popular among the delegates, the program committee decided to accept the caucus' language as a friendly amendment, and thus avoid a vote on the issue directly.

Next followed the other critical debate at the assembly--plans for spring actions around the sixth anniversary of the Iraq war.

Initially, UFPJ had called for mobilizations during the week of the anniversary of the Iraq war. Two other antiwar formations--the National Assembly that met in Cleveland this past summer and International ANSWER--put out a call for an ad hoc coalition of all antiwar groups for a national demonstration on March 21 in Washington, D.C.

UFPJ's leadership didn't respond to this call for unity, and instead proposed local actions on March 19 and a spring national mobilization in New York City on April 4. Asserting that the antiwar movement alone isn't capable of mobilizing sufficient forces and would risk alienating the Black community if it directly confronted Obama, the New York City march will have a slogan "Yes we can...End the war"--but will emphasize a broad range of issues, such as corporate crime on Wall Street, the financial crisis, health care and environmental justice, among other issues.

The caucus argued for the two calls for national mobilizations not to be counterposed, and instead be viewed as complementary, but lost the vote for them to be considered separately. UFPJ's leadership insisted on voting on the proposals in a way that forced delegates to choose one or the other.

In the debate, two Iraqis rose to speak in favor of a united anniversary action in Washington, but were met with lukewarm support from the audience. As Zaineb Alani, an Iraqi antiwar activist now living in Ohio, said:

Local actions are not loud enough. The media will not cover them, and so the message will be silence. I am for mass action this spring in Washington where all the decisions are made with regard to economic and foreign policy.

To counter this argument, supporters of UFPJ's leadership spoke of the importance of broadening the constituency and agenda of UFPJ. But the logic of their position was to insist that no antiwar demonstration take place in Washington. They invoked Martin Luther King's legacy to justify their call for April 4 in New York, the date and site of King's famous antiwar speech "Beyond Vietnam" in 1967. But their arguments turned the meaning of King's speech on its head.

In April 1967, King broke his silence on the U.S. war on Vietnam and called for protest against the administration of Democrat Lyndon Johnson. King was making the case for directly taking on the questions of war and militarism. UFPJ's leadership is using King as a vehicle to do the exact opposite--deflect attention from the Democratic Party's plan for endless occupation in Iraq and escalation in Afghanistan.

In the vote, UFPJ's leadership prevailed, 148 delegates to 50. But this crucial debate was given far too little time, with each side given three speakers for 90 seconds each before attendees were asked to make their decisions.

MANY IN the ranks of UFPJ are far from happy about the direction of the coalition. "If there were more Iraqis present, and they observed this reaction, the one message it sends is 'we don't care,'" said Zaineb Alani.

One expression of the discontent was the opposition many felt to the leadership proposal for the reorganization of the steering committee and the election of the committee itself. Some UFPJ leaders proposed reserving spots on the steering committee for NGOs and significant funders. This would have created a permanent bureaucracy of established groups with similar outlooks, and further diminished the opportunity for grassroots activists to influence UFPJ.

After some delegates argued against the proposal from the floor, the attendees struck it down with only two voting in favor of the proposal. Even the bulk of the steering committee ended up voting against its own proposal once the sentiment in the room was clear.

Thus, many questions about the future of the antiwar movement remain. Now that UFPJ's leaders, in our view, unnecessarily juxtaposed two proposed actions--the March 21 action and the April 4 action--what should be done?

Joe Lombardo of Bethlehem Neighbors for Peace in Albany, N.Y., summarized the feelings of many as the convention drew to a close:

Antiwar sentiment is very strong, but the leadership seems to be moving away from antiwar positions. I don't think UFPJ will say what they have done very clearly. I think they will obfuscate a little bit, but I think in the long run, they are moving away from an antiwar position, and they are going to be losing a lot of people who are interested in building an antiwar movement.

We need to build an antiwar movement, even in the difficulty of a honeymoon period. In the long run, it's the right thing to do, and it will lay the foundations for a much larger movement in the future.

Unfortunately, UFPJ has created artificial obstacles to building a united movement this spring. But given the new political climate in the U.S., this is hardly the time for inactivity. Antiwar activists should support and mobilize both for the March 21 demonstration in Washington, D.C., as well as UFPJ's multi-issue April 4 demonstration in New York City.

A shorter version of this article appears in the new issue of the International Socialist Review.