The strange evolution of “intelligent design”

Scott Johnson reviews a new book that traces the debate over intelligent design--and its anti-materialist roots.

THE RALLYING cry of the intelligent design (ID) movement is that Charles Darwin's theory of evolution is "only a theory" and that schools should "teach the controversy." They then go about attempting to poke holes in this mere "theory"--ignoring that relativity and even Newtonian mechanics are also "theories"--with little to show for their own theory.

Every attempt to explain a presumably unexplainable adaptation by evoking the theory of an "intelligent designer" eventually collapses under the weight of research that shows the evolutionary roots of the organism or its trait.

In spite of--or probably because of--the weaknesses of their arguments, ID supporters prefer to focus on the "gaps" in Darwinian evolution, no matter how small, rather than talk about the background to their own theory. Many biologists who provide brilliant and devastating critiques of ID tend to keep the argument on this ground as well, reluctant to take on the philosophical implications behind either theory.

There are a number of excellent books upholding the science of natural selection and criticizing the pseudo-science of intelligent design, but few look the philosophy behind the ID movement square in the face and challenge it on those terms. Critique of Intelligent Design by John Bellamy Foster, Brett Clark and Richard York attempts to rectify this situation. 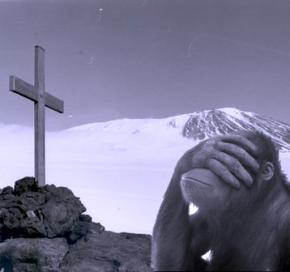 The modern roots of the intelligent design movement lie in the 1987 Supreme Court ruling Edwards v. Aguillard, which ruled that teaching Biblical creation as an alternative to evolution was an unconstitutional endorsement of religion. The vague notion of an intelligent designer--possibly but not necessarily a God or other supernatural force, but not requiring a religious commitment to the Garden of Eden or Noah's Ark--suddenly became the new theory of creationists.

A creationist book in the making called Creation Biology was renamed Of Pandas and People, with the word "creationism" crudely substituted with "intelligent design" throughout, a fact that would expose the religious roots of the ID movement in a 2005 trial.

An even bigger exposé, however, occurred with the publication of the Discovery Institute's "Wedge Document"--an explicit multi-year battle plan documenting the actual goals of the movement's leading think-tank. Never meant for public eyes, this document was "liberated" in 1999 by a part-time worker entrusted with copying it and his tech-savvy friend who posted it on the Internet.

In one key passage quoted by Bellamy et al., we find that "The Discovery Institute's Center for the Renewal of Science and Culture seeks nothing less than the overthrow of materialism and its cultural legacies." Elsewhere, the document states that their goal is to change attitudes on "sexuality, abortion and belief in God."

SO IT is clear that the background and purpose of ID are religious, but a further theme of Critique of Intelligent Design is the anti-materialist roots of the ID arguments. These neo-creationists are opponents of all of the obvious figures in materialist philosophy and the scientific revolution such as Charles Darwin, Karl Marx and Sigmund Freud. But they also have a particular bone to pick with Epicurus, the ancient Greek materialist philosopher who was a contemporary of Plato and Aristotle.

According to leading ID ideologue William Dembski, "All roads lead to Epicurus and the train of thought he set in motion." Apparently, this is a grudge going back many centuries before Christ.

ID proponents despise Epicurus because he rejected the interference of the Gods as explanations of the material world and even had a crude theory of evolution to explain the development of life. While he avoided engaging in politics in favor of contemplating philosophy in his academic "Garden," he admitted women and slaves to study as equals--unlike other Greek academies. Karl Marx, who was impressed by his philosophy, would later write his doctoral dissertation on Epicureanism.

In return for his philosophical contributions, as Critique explains, Western thinkers have attacked and downplayed the ideas of Epicurus for centuries. Dante's Inferno "consigned Epicurus and his followers to an eternity of torture in open coffins in the sixth circle of Hell."

The Catholic theologian Thomas Aquinas rejected Epicurus in favor of the idealist Plato because Epicurus "denied that there is any providence" and "held that the world came about by chance." Aquinas also argued that the material world was directed by some "intelligence...like an archer giving a definite motion to an arrow to wing its way to the end."

The book provides a specifically Marxist perspective that the authors employ in an attempt to avoid the traps of either ceding too much ground to religious ideas (as they argue radical paleontologist Stephen Jay Gould did) or simply retreating to a "crude atheism" that dismissively snubs its nose at religion:

As a materialist, Marx opted not to invest in the abstraction of God and religion. At the same time, he did not attempt to disprove the supernatural existence of God, since that transcended the real, empirical world and could not be answered, or even addressed, through reason, observation, and scientific inquiry...[A]s Marx observed in his Theses on Feuerbach, a crude atheism that sought to establish itself alongside traditional religion "as an independent realm in the clouds" had relatively little to offer. The critique of religion was therefore socially meaningful only to the extent that it...[was] rooted in "revolutionary practice."

Much of Critique of Intelligent Design discusses this centuries-long battle between materialists and anti-materialists. Fortunately, even though the book is more about philosophy than science and politics, it is not an unreadable tome of abstract ideas.

Rather, this slim volume is meant as an intervention in the discussion around intelligent design, giving a philosophical underpinning to the debate in a way that most scientific discussions do not. The book also provides a valuable and brief introduction to the history of materialist philosophy and its detractors.

What is surprising is how often the book is able to show that the battles against materialist ideas have invoked evidence of "intelligence" and a "designer," much like the arguments taking place in the classrooms and courtrooms today. The authors are quite convincing in using this fact to make the point that these arguments are not new not, are not going away, and are about even more than whether evolution is taught in the classroom.