Elizabeth Schulte reports on Amazon's scheme to scrub LGBT titles from its book searches--and the protest it inspired.

AMAZON CALLED it a "glitch." The rest of us know it by another word: "Censorship."

This weekend, it was discovered that the multibillion-dollar Internet store was stripping the sales ranking--the number that Amazon uses to compare how well one title sells with another--from books with LGBT content. By doing this, Amazon condemned certain books not to show up in searches.

Amazon's policy change came to light when writer Mark Probst saw that his book, a teen gay romance called The Filly, and numerous other gay and lesbian books no longer had rankings. As Probst explained in his blog, he contacted customer service to ask what was going on, and this is the answer he got:

In consideration of our entire customer base, we exclude "adult" material from appearing in some searches and best-seller lists. Since these lists are generated using sales ranks, adult materials must also be excluded from that feature. 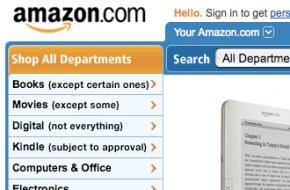 According to Salon's Broadsheet, "So many books had been wiped out of the search terms that, on Sunday night, a book search for the term 'homosexuality' turned up this: A Parent's Guide to Preventing Homosexuality."

Craig Seymour, author of the memoir All I Could Bare: My Life in the Strip Clubs of Gay Washington, D.C., reported on his blog that this problem goes back to February, when Amazon dropped his sales ranking and then restored it some four weeks later, after he was told that his book had been "classified as an adult product."

When news of Amazon's crusade against LGBT books was revealed, the public outrage was immediate. Petitions were circulated and thousands of people signed on, and Facebook groups were formed in protest. Amazon customers, who can add tags to books on the online store, began flagging hundreds of books affected by the new policy using the tag "amazonfail."

In response to the public outrage, the company announced April 13 that de-ranking the books wasn't part of a new policy, but was a mistake. But as Salon's Sarah Hepola pointed out, if it was a so-called glitch, then why did a representative of Amazon tell Probst about the new policy to "exclude 'adult' material"?

Keep the pressure on Amazon by signing a petition that protests its policy on LGBT titles. For more information, Facebook members can join the group Hey Amazon: Stop Censoring LGBT books!.

It's a start but completely insufficient. It does not explain why writers, like myself, were told by Amazon reps that our books were being classified as "adult products." It also doesn't address why they took so long to do something about it, when they clearly knew about my issues back in February. Why didn't they address and fix the problems at that time?

It appears that Amazon changed its tune on its antigay policy when it realized how many people were ready to speak out against it. If you want to make sure "mistakes" or "glitches" like these don't happen again at Amazon, sign a petition and join one of the Facebook groups that activists have initiated, such as Hey Amazon: Stop Censoring LGBT books!.