What killed the auto industry?

Gregg Shotwell, a retired GM/Delphi worker and founder of the Soldiers of Solidarity network, answers the myth that it was the UAW--and its demands for fair compensation for autoworkers--that led to the industry's decline.

IF YOU believe the Motley Fool and other "stock advisors" in the business press, 90 percent of GM's losses can be attributed to the United Auto Workers (UAW), which accounts for 10 percent of a vehicle's cost.

The math may seem a bit obtuse but the politics is clear as fizz. The UAW's disproportionate responsibility for the automakers' unprofitability is based on the same sort of accounting whiz that led GM to claim they lost $39 billion in November 2007 due to "deferred tax credits."

If it smells like b.s. and it looks like b.s., trust your common sense and skip the taste test.

Thanks to corporate welfare, GM accumulated more tax deductions than they could take in a year. So they deferred the tax deductions and booked them as an asset until the asset got so fat it attracted the attention of auditors who asked--"quote unquote"--What the f##k is this?

Rick Wagoner was quick to assure the fools not to puzzle their pretty heads. The $39 billion wasn't actually a loss of cash, he said, since it never had a tangible, marketable existence. It was merely an accounting gimmick--a fancy--like paper wings. 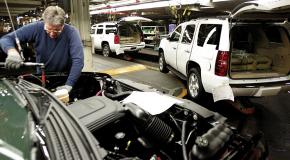 The fools refer to compensation like pension and health care as "welfare," despite the fact that unlike "deferred tax credits," the compensation was earned by productive labor. It's no wonder the fools are having trouble figuring out what part of GM is losing what, and how much, and why. They ignore the obvious and thumb their noses at analysis. For example:

A company can't make productivity improvements as astounding as that and lose money on labor. Something else is shaking the timbers. Maybe we should question the competitiveness of salary workers? How do they compare with their Japanese counterparts in compensation and achievement? Or more precisely, who's controlling the money?

SINCE GM sold as many vehicles in the U.S. in 2007 as it did in 1992 and employed 192,000 less UAW members, profits should be way up by any accounting standard. Unless, of course, profits were siphoned off into investments overseas, dividends, bonuses or unaccountable black holes of financial rigamarole. (In 2005 GM paid Fiat $2 billion dollars to get out of a "put option" that would have required GM to purchase Fiat.)

GM sold over 9 million vehicles worldwide in 2005, 2006 and 2007. If GM lost money on sales that enormous, Wagoner wouldn't have been awarded a $23 million payoff. He would've been put up against the wall and shot. What does the Board of Bystanders know that we don't know?

For starters, GM manufactures vehicles in 35 countries. GM has been expanding in emerging markets for 20 years and hasn't let up on the gas. In September 2008, GM launched construction of a $250 million corporate campus in Shanghai. GM invests about $1 billion per year to expand production in China. In April 2008, GM announced a plan to build a $200 million engine plant in Brazil. GM opened a second plant in India in September 2008, bringing its production capacity there to 225,000 vehicles per year. It also announced plans to double the number of dealerships and service centers throughout India.

In November 2008, GM opened a $300 million plant on the outskirts of St. Petersburg that will produce 70,000 cars per year. In March 2009, a venture partly owned by GM through its Korean subsidiary Daewoo, announced a plan to open a new car plant in Tashkent, the capital of Uzbekistan, to produce 15,000 Chevrolets per year and create 1,200 jobs. Alongside this international expansion, GM announced the closure of 12 plants in the U.S. in 2007. In 2008, GM added five more to the list of plant closings.

GM is on the march, but according to the folks who call $39 billion in "deferred tax credits" an asset, the UAW must get leaner, and "welfare" for blue collars workers should be axed so "unearned income" for the leisure class can get jacked up.

The $39 billion asset was a boondoggle--it never existed, not even as an unhatched egg, let alone a chicken. It wasn't a loss of cash, it was an auditor's correction of crooked bookkeeping. But it helped steamroll the union and trumpet the demand to dump legacy costs. Labor's legacy of profit was invested outside North America, but that shouldn't make the debt uncollectable. Labor deserves to benefit from the investment of its legacy profits. Labor has a legitimate lien on capital.

SOLDIERS OF Solidarity has been saying this since 2005, when Delphi first filed for bankruptcy. Delphi transferred assets overseas. It insisted that assets outside the jurisdiction of U.S. courts were profitable, but untouchable.

When Delphi proposed to cut wages in half and eliminate retirement benefits, we warned that Delphi was the lead domino, and the wage and legacy cut would ripple through the economy. We warned that the restructuring would spiral down and the impact on the economy would be profound and permanent.

It doesn't require a degree in economics to figure out that workers making $14 per hour don't buy new cars. They don't buy homes, and they don't invest their savings in the stock market. They live paycheck to paycheck. Restricted income leads to boycott by default. The economic blowback won't end with the Detroit Three.

When GM's labor costs reach parity with Toyota, Toyota will ratchet wages down again. The automotive industry is too entrenched in our national economy not to have a cascading impact on wages throughout the country. The dominos won't stop falling at the end of the assembly line. They'll keep tumbling until every one is down.

If the Detroit Three can't sell cars to their own workers, it doesn't matter how cheap they buy labor. The market is going down. It's the paradox of thrift. When savings isn't invested at home, in production as opposed to speculation, it reduces demand and inhibits growth.

The double whammy of free trade and de-unionization in the U.S. compounded the thrift paradox. The savings extracted from cheap, non union labor was invested overseas. The companies' thrift strategy undermined their most loyal customers--employees and communities in the U.S.

What can workers do? What's our alternative? Strikes are worse than useless when the company wants to reduce inventory.

We are left with one option: the wallet vote. We aren't buying your crap anymore.

We won't buy anything we can't eat, and we'll be growing our own. We aren't investing our life savings in banks or stocks or bonds. We are opting out of the system controlled by crooks and liars. In a rational society, workers could petition the government to invest in productive enterprises that create jobs, but we don't have a socialist democracy. We have a government controlled by money changers and pissant politicians.

Unaccounted billions are turned over to private financial institutions. A pittance is dedicated to temporary job creation, and nothing is invested in manufacturing. Stop-loss loans that require collateral damage--layoffs and plant closings--as a condition of remission do not constitute investment. The arsenal of democracy has been outsourced to China, Brazil and Uzbekistan.

Stuffing pockets at AIG, Bank of America, etc., is not investing. It's speculation, it's casino capitalism. It's a massive transfer of wealth from the working class to a cadre of people who live off unearned income.

Zero dollars have been invested by our government in regenerative, productive, industrial capacity. The paradox of thrift is self-defeat. If government funds aren't used to promote the prowess and ingenuity of manufacturing in the U.S., we won't see recovery, we'll see depression in capital letters.

The U.S. market didn't dry up naturally, it was raped and murdered. Unlike the fools, we know the perps aren't the ones with dirt under their fingernails. The government has not, to date, gone door-to -oor confiscating guns, but the oligarchy is methodically stripping the nation of toolmakers.

We are led to believe a lie when leaders degrade labor in honor of false profits.

Preserve your skills. We're going to need them.