President Barack Obama's education reform proposals are highly controversial with teachers, many of whom see the White House push for merit pay as an attack on their unions. The teachers' unions are also disappointed with the Obama administration's commitment to the No Child Left Behind (NCLB) law--pushed through by George W. Bush--which puts overwhelming emphasis on meaningless tests and allows school districts to penalize "failing" schools.

PRESIDENT OBAMA'S ideas on education aren't a surprise, since he presented all of them during his campaign.

However, we hoped his choice for Education Secretary would be someone else--such as Linda Darling-Hammond [a Stanford University education professor and critic of NCLB], and that we would be able to put pressure on him to change his views. [But Education Secretary] Arne Duncan falls right into the mold of pro-charter, pro-privatization, pro-the worst elements of NCLB--testing, sanctions, etc.

It's disappointing, but not surprising. We've got our work cut out for us to challenge the claims of so-called education reformers (AKA, deformers) that pay-for-scores will increase learning, that charters will foster healthy competition, that top-down mandates will increase teacher retention.

In contrast, we argue for real reform: increase teachers' salaries to reflect the amount of work they actually do, improve resources and conditions at schools with the greatest needs, provide adequate support personnel as well as time for teachers to collaborate and plan, and the academic freedom to teach to each child's strengths, instead of teaching to the tests. 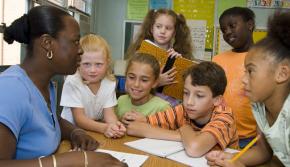 The global economic crisis is also an opportunity to challenge the status quo and point out the obvious inequity in providing bailouts and bonuses to banks and corporations while blaming struggling schools and teachers for social inequalities.

The current focus on bashing teachers and teachers' unions is a cry for us to present the real data--that it's not teachers and unions who are failing our schools, but a society that doesn't want to adequately fund public education. Passage of the Employee Free Choice Act would be a step forward in rebuilding the labor movement. But the biggest impact will be public resistance from workers who are in unions--and who know the value of uniting to protect our rights.

I was prompted to write [to California State Superintendent of Public Instruction] Jack O'Connell, because for the past six years he has presided over a corporate experiment in Oakland, one which has seen the destabilization of our district through the closure, conversion to charters, and reconstitution of over half of our schools.

[O'Connell] has tried to sell district property, approved the opening of dozens of charters, and attempted to push through a ballot measure in November that would have given charters 15 percent of increased tax revenues.

Disregarding the public's defeat of this parcel tax, O'Connell decided to simply steal money from the district's general fund. He has shown again and again that he has no interest in democracy or equity. This was simply the final straw. I wanted to make sure he knew that he would never receive any support from teachers in Oakland in his bid for governor, and that his experiment with privatization will be fought.

I have received no response from Jack O'Connell. But the [California Teachers Association, or CTA, the OEA's parent union] wrote a letter to him objecting to this latest action, informing him that CTA and OEA would pursue legal means if he refused to return the money. I've gotten extensive, positive feedback for the letter from locals around the state, and an article about it will appear in the April issue of CTA's California Educator.