Right back where we started

With Chrysler in bankruptcy and GM on the brink, Gregg Shotwell, a retired GM/Delphi worker and founder of the Soldiers of Solidarity network, looks at how autoworkers wound up in the situation they're in today.

SOMETIMES, ONE can't see the precipice for the pitfalls.

When you've lost a job or taken a steep pay cut; when your pension is threatened and your backup plan nose-dives; when you're faced with foreclosure or stuck in an abandoned neighborhood; when your biggest investment in life just lost half its value despite all the time, love, money and labor you put into it; when you're forced to relocate, but can't afford to uproot; when you're too young for Medicare and too old not to have pre-existing conditions that exclude you from health insurance; when you've followed all the rules only to find that the rules have changed--when one or all of the above apply, it's understandable that you may cling to your private barrel of anxieties as the current hurls you down the Niagara. 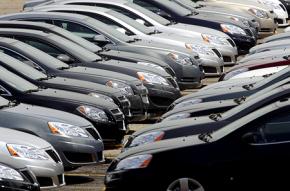 The United States is not in a recession. We're getting "restructured" and "rationalized."

The good news is the barrels that once provided an illusion of safety are smashed to smithereens. From the wreckage, we can clearly see that either we all rise up together, or no one walks away with dignity, let alone a living wage.

The good news is no one--not the salary workers, the knowledge workers or the retirees--will be spared. The carbon monoxide of 'too-bad-for-them-but-I'm-okay' complacency has blown away. Catastrophe demands unity. The good news is, our history can lead us.

Money isn't lost, it changes hands. It's not a conspiracy, it's capitalism. The transfer of wealth from labor to capital didn't begin with the current crisis.

THE DELPHI bankruptcy characterizes the contemporary strategy and serves as a template for what the Detroit Three and subsequent industries can expect. Recently, Delphi abolished health care and life insurance for salary retirees. The switch enabled the company to report to the SEC that it "swung to a $566 million net profit from a $577 million loss a year earlier" (Autobeat, 5/13/09). Easy money. Unearned money. Lots of it.

Next, they will liquidate the salary pension. What's to stop them? Capitalism is the law.

GM and Chrysler may not achieve all their goals in the quick rinse bankruptcy controlled by the Feds, but they'll be back in court to finish the job, just like Delphi. Observe how history repeats itself.

But the nail in the coffin is the agreement to settle the contract in 2011 by arbitration, based on nonunion standards. That isn't a contract, it's a death warrant for the UAW. What could be more clear? The Concession Caucus has effectively decertified the UAW.

The union agrees not to strike and commits to a goal that nullifies any benefit to union membership. This is the price we pay for company stock in a VEBA? The UAW signs confidentiality agreements with the companies and leaves members in the dark. Read the actual contract language at the Soldiers of Solidarity Web site.

Read it and weep. Weep for the unsung heroes who risked everything they loved in the depths of the Great Depression so the next generation might labor in dignity. Weep for the youngsters, who tread in the footprints of the generation, and who chose to collaborate with management and sold their birthright for a bowl of maggots that the clipboards call joint programs.

Read it and revolt like the heroes of America's civil rights movement, who faced guns and clubs, police dogs and fire hoses, pimped-out politicians, and judges controlled by cowards in hoods, so their children might live in dignity.

Read it and recognize that UAW members lost their voting rights.

Recently, my wife Sheila and I ventured down to the crossroads in Clarksdale, Miss., for the annual Juke Joint Festival. Every year, it seems there is one old standard that predominates--that bands play at every juke joint we frequent. Each year, it's different. This year, it was "Big Boss Man" by Jimmy Reed. Over and over again, we heard:

You got me working, boss man / Working 'round the clock.
I want me a drink of water / You won't let me stop.
You big boss man / Can you hear me when I call?
Oh, you ain't so big / You just tall, that's all.

The blues is essentially subversive. Every blues, like every river, has an undercurrent, a subtext, a baseline shackled to oppression and resistance. A song like "Baby Please Don't Go," for example, isn't just another song about love. It's a song about slavery and addiction; it's a song about poverty and injustice; it's a song about fear and violence and solitary confinement.

And like every old blues, it's a song about the struggle, the struggle to be human in an inhuman world--like Detroit or Buffalo or Cleveland, N.C.. Or a meatpacking plant in Postville, Iowa, that treats workers like animals, and where the Feds arrest those workers under regulations as cruel and uncivilized as Fugitive Slave Laws.

We're right back where we started. The authorities turned fire hoses and police dogs on the children in Birmingham, Ala., in 1963 and arrested them just like the police beat and arrested children trying to escape the textile strike in Lawrence, Mass., in 1912. The struggle isn't between North and South, black and white, native born and immigrant--it's between labor and capital.

When we try to take back what belongs to us, they will beat us and arrest us, and we will know exactly where we stand on the precipice.