Fulfilling Bill O'Reilly's greatest fears, Obama must have sat right down and read it on the Air Force One ride back to Washington, because within weeks, the U.S. government agreed to allow Cuba to re-enter the Organization of American States (notwithstanding Cuba's disinterest in the invitation).

More recently, Chávez remarked that the next time he sees Obama, he'll give him a copy of Lenin's What Is to Be Done? Lars Lih, author of Lenin Rediscovered, which includes a new translation by Lih of Lenin's book--and whose efforts richly deserve some of that Chávez best-seller magic to rub off on them--commented:

What Is to Be Done? represents a heritage that had to be rejected [emphasis added] before Soviet tyranny could be established...Lenin goes way overboard in his sanguine optimism about the workers' revolutionary fervor. Lenin's organizational suggestions are all about reconciling the contradictory imperatives of avoiding arrest in the underground while simultaneously creating extensive roots in the Russian worker community. 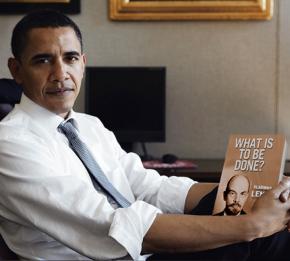 In other words, it is a book that Obama can appreciate as a former "community organizer." No doubt, David Axelrod will soon be organizing study groups on it in the White House basement--which, as everyone at Fox News knows, is teeming with Reds. I can just see the White House Twitter reminding all staffers, "11pm tonight. Read chapter 2 re: difference between propaganda and agitation. Don't invite NSA guys."

All this got me thinking about what other books I hope Chávez gives to Obama. So I figured I'd write Chávez a letter with my recommendations. If O'Reilly's right, Obama will no doubt absorb the lessons in these books and apply them as quickly as your nose goes numb in Moscow in February.

Who knew dismantling the American empire would be so easy? All we needed was a president who could read beyond the third-grade level! So, here goes nothing.

The next time you see President Obama, could you please give him a copy of each of the following books?

I know it's a hassle carrying around books in your briefcase, so maybe you could space them out over time? You know...one when you see him in Managua on July 19 for that 30th anniversary surprise party for the Nicaraguan Revolution you're throwing for Ortega? Then you could give him the next one on August 13, at Fidel's birthday dinner that he and Michelle are attending in Havana. He's a pretty quick read, so you might even give him two there.

What do you think?

What would you recommend for Hugo Chávez to add to Barack Obama's reading list?

We're asking readers to give us your picks--reply with your name, the title of the book and your reasons for recommending it (keep it to around 100 words). We'll publish a selection of your suggestions next week at SocialistWorker.org.

I know it's a problem that he's not planning on taking six-week vacations like Bush used to do. So he won't have as much time for reading, but I'm hoping that after they finish up the What Is to Be Done? study group, they can schedule reading time into his daily calendar. I mean, how many intelligence briefing books can you read about the Swat Valley?

Anyway, I know you're busy, but please do what you can. Here's the list:

The End of the Peace Process: Oslo and After
By Edward Said
It's too bad that Said died a few years ago. He might have been able to talk some sense into Obama. It's good that Obama spoke in Cairo, but that doesn't make up for the $6 billion a year he continues to give Israel. Besides, Said's literary legacy is a must for any serious student of humanity. This and Said's other books should simply be required reading--maybe Obama can get it on the curriculum in American high schools?

Iran: Between Two Revolutions
By Ervand Abrahamian
Tell him to start here to understand Iran. The author completely smashes the idea that Iranian workers and students are blind followers of the Islamic rulers. Far from it, Iranians organized powerful secular movements for democracy (usually against American-backed puppet dictators) throughout the last century, and they don't look like they're going to stop now.

Hear Todd Chretien at Socialism 2009 in Chicago and San Francisco, speaking on "Lenin's State and Revolution" and "Introduction to the International Socialist Organization." Check out the Socialism 2009 Web site for more details. See you at Socialism!

Road from Ar Ramadi: The Private Rebellion of Staff Sergeant Camilo Mejía
By Camilo Mejía
This book will remind him that there is no way to "responsibly" reorganize the colonial occupation of Iraq. Camilo fought there and went to prison rather than be sent back for another deployment. If Obama wants an adviser who will tell him the truth about Iraq and Afghanistan, he should call Camilo.

Battle Cry of Freedom
By James McPherson
Obama is a big Lincoln fan, and like Lincoln, Obama was hoping for some sort of rotten compromise with the reactionaries of his day upon taking office. We can only hope that when that proves impossible, Obama will learn the lesson of Lincoln's Second Inaugural Address. An appreciation for the profoundly violent struggle that was the Civil War might help him see beyond Lincoln's rhetoric to the reality of how change has really, historically, come about in the United States.

Black Reconstruction in America: 1860-1880
By W.E.B. Du Bois
Knowing Lincoln without knowing Du Bois is like knowing Salieri without knowing Mozart. Du Bois teaches that there is no such thing as steady progress on the "arc of history," as Obama said in Grant Park on Election Night. History is really about sharp turns. After emancipation came Jim Crow. Du Bois explains why American capitalism cannot do without racism.

Subterranean Fire: A History of Working-Class Radicalism in the United States
By Sharon Smith
Carrying on from Du Bois, Smith continues the theme that ending racism must be part of the fight against exploitation--and only a real mass movement can do it. I doubt Obama will like this one very much (the author is very hard on the Democrats). But if he wants to know how the banks and HMOs got all that power and money, Smith explains how they stole it all from the workers.

Sexuality and Socialism: History, Politics and the Theory of LGBT Liberation
By Sherry Wolf
Obama's declaration of June 2009 as LGBT Pride Month was a good start, but he's really got to drop his opposition to same sex-marriage. I mean, his parents were a biracial couple, which was against the law in many states when he was born. What's worse, I'll bet you dollars to donuts that Obama really supports gay marriage, and is just keeping his mouth shut. That's what they call hypocrisy, and the quicker he comes clean, the better. Tell him I know the author, and she'd be happy to talk things over if he's interested.

Myths of Male Dominance: Articles on Women Cross-Culturally
By Eleanor Burke Leacock
Obama is a breath of fresh air compared to the misogynists in the last administration, and he's definitely a liberated man in many ways. And I'm sure he'd support a woman he believed in for president (heck, he might even support Hillary in 2016). But the Christian Right has inflicted a toll on women's rights over the last few decades, and even liberals, including Obama, now spend as much time apologizing for abortion rights as they do "defending" women's right to choose. This book could help turn him around. By the way, you should read this one, and do some thinking yourself about abortion rights in Venezuela, comrade.

All Alone in the World: Children of the Incarcerated
By Nell Bernstein
Obama wrote about how painful his father's absence was for him in Dreams from My Father. Well, there are 2.4 million children in the United States today with at least one parent incarcerated. Maybe you could propose this to him: order the release of all nonviolent prisoners in America--let's say, 1 million people. And give them $50,000-a-year jobs so that they could earn respect and be reunited with their children. You know how much that would cost? $50 billion. In other words, for a little more than 25 percent of what he's given to the crooks at AIG, Obama could help heal the damage that a whole generation of innocent children is suffering.

Charter Schools and the Attack on Public Education
By Sarah Knopp
Okay, this one is an article, and Obama can read it on his Blackberry at the International Socialist Review Web site. You probably have his cell number, so just text it to him. Knopp is a teacher in Los Angeles who was recently arrested at a civil disobedience protesting against thousands of teacher layoffs. The union wanted to go on strike for a day, but a judge threatened to fine the union millions of dollars if they did...so much for democracy. My wife is a teacher, and my guess is that 75 percent to 80 percent of teachers in America voted for Obama, but if he doesn't want to lose their support, he should tell Arne Duncan to stop "reconstituting" (a fancy word for firing all the teachers) public schools and handing them over to for-profit charter companies. We all know how well the "free market" worked out in real estate!

Alright, that should keep him busy for a few months. Let me know how it goes in Managua with Daniel and the gang.

P.S. I would have included The Communist Manifesto, but I'm sure Obama has already read that. I mean, he did go to Columbia in the 1980s, during the anti-apartheid protests.