Why isn’t our union fighting?

A CRISIS is tearing through the American public education system like a tornado. It threatens to uproot and overturn everything in its path.

It's no secret that our schools are in a miserable place, and it's something that can't last indefinitely. No one wants it to. So far, the proposals for change are pretty dismal: More cuts to funding. More high-stakes testing. More shredding of collective bargaining rights. More merit pay. More charter schools.

So where is the California Teachers Association (CTA) in all this?

To be blunt, the CTA that we need is nowhere to be found. Instead, the CTA that we have has tried to cut deals with politicians in the state capital of Sacramento, and pay lip service to organizing where it counts.

There's no question that CTA leaders oppose cuts to education. And they're much better at saying "no" to merit pay than many of their counterparts in the American Federation of Teachers. But the issue isn't about how anyone feels or what they're saying. This is a question of power, because the people who have it get to make the decisions. 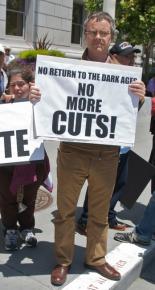 The CTA approach to power runs right through Sacramento. During last year's budget mess, the union tried to cut deals by threatening to support a ballot initiative to raise the regressive sales tax if politicians didn't act.

When that didn't really work, they got behind Republican Gov. Arnold Schwarzenegger's ridiculous ballot measures to raise even more regressive taxes and create a "soft" spending cap--a move that would have kept state spending for education restricted to the level it was at during one of the lowest tax revenue years in over a decade.

When that didn't really work either--because voters rejected the measures by a 2-to-1 margin--things really looked bleak.

The union did organize a day when every teacher in California wore pink to work in solidarity with pink-slipped colleagues. Many of us attended rallies that evening, too. But it was just a one-day affair, without any follow-up activity besides more phone calls to legislators.

Now it's one year into the economic crisis, and California is 20,000 educator jobs lighter than the year before. In response, the CTA is advocating for a 2010 ballot initiative that would reverse tax breaks to California corporations that were inserted into last year's "budget compromise."

When those tax breaks passed, the Los Angeles Times described them as "a permanent windfall" for large corporations. These giveaways to business weren't tied to any job creation whatsoever--and our union is right to push to overturn them.

But a repeal of these tax breaks, however justified, is the low-hanging fruit of economic injustice in this state. The CTA's effort doesn't touch Proposition 13, the ballot measure passed in 1978 that has sharply limited property taxes and starved education of funding ever since. Nor does the CTA's legislative agenda include challenging the two-thirds rule needed to pass the state budget--a requirement that gives the minority Republicans a veto over the entire process.

THE RATIONALE put forward by CTA leaders is that the fight to repeal the tax breaks is small enough to be winnable, but big enough to matter. But would the revenue it brings really be big enough to stem the budget crisis?

Admittedly, picking a fight over $2 billion probably won't raise the ire of California's elite the way targeting Proposition 13 surely would. But such an effort might not generate much passion among teachers, other unions or progressives either, given its modest impact in relation to the scale of the crisis.

What's more, the CTA's recent track record is so abysmal that many delegates to last weekend's statewide governing body openly doubted whether even this small fight could be won. Members are demoralized on the local level and lack confidence in their statewide union.

The only bright spot is that even this timid plan is a departure from the CTA's recent tendency to cut deals and propose regressive taxes. It's a sign that our leadership is under some pressure to do the right thing. In fact, last year, the incumbent treasurer was narrowly defeated for re-election in a contest that many took as a referendum on the entire leadership team.

But the tax cut repeal campaign is still too small and too narrowly focused on legislating our way out of the crisis. CTA leaders should instead take note of last week's grassroots conference at the University of California-Berkeley, where activists got it right by calling for a March 4, 2010, day of action. In some places, this will mean strikes and walkouts.

But this contrast in approaches to the crisis raises some questions about our union. Is the CTA strong because we have really good lobbyists in Sacramento and great lawyers who advocate on our behalf? Or is it strong because without teachers, our schools simply couldn't function?

There is no more high-stakes a question than that. And until the CTA can figure out how to answer it correctly, our response is going to continue to be far too weak to win the battles ahead.