Elizabeth Schulte explains why the Stupak Amendment passed during the House debate on health care is a blow to women's abortion rights--poor women in particular.

THERE WAS a lot of back-patting after the House of Representatives narrowly passed a health care reform law November 7. In the spirit of bipartisan compromise, even the fact that the bill included an amendment shredding poor women's access to abortion was a point of pride for some Democratic politicians.

"Given the heated and often misleading rhetoric surrounding this legislation, I know that this was a courageous vote for many members of Congress, and I'm grateful to them and for the rest of their colleagues for taking us this far," said President Barack Obama.

Courageous? Sure, if you define "courage" as selling out a woman's right to choose. Very, very courageous.

It wasn't enough that the bill was a step backward for the millions of uninsured and underinsured in the country today, and a boon for the health care industry whose profits are further assured since it will have a new pool of people forced to buy health insurance under the bill's mandate. Besides all that, the bill included an amendment that puts the broadest restrictions on funding for abortion since the Hyde Amendment passed in 1976. 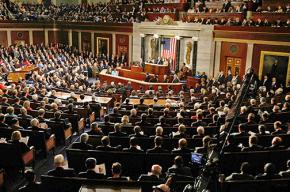 SIXTY-FOUR Democrats joined every Republican in voting for the Stupak Amendment, sponsored by Michigan Democrat Bart Stupak. The amendment stipulates that in order for insurers to participate in the health insurance exchange established by "reform" legislation and sell their product to government-subsidized consumers, the insurers can't cover abortions. This further restricts access to abortion for poor women who are less able to afford abortion or any other form of health care.

If the amendment makes it into the final version of health care legislation, insurers will drop abortion from the procedures they cover in order to be eligible for the exchange--making abortions even less accessible to the women who need them.

Two studies conducted by the Guttmacher Institute and the Kaiser Family Foundation found that in 2002, 87 percent of typical employer-based insurance policies covered abortions. So does, by the way, the plan currently used by the Republican National Committee, as Politico.com recently reported. In addition, since many employers are expected to drop insurance plans that cover employees when a public exchange is offered, even more women could lose their abortion coverage.

Most abortions--some 90 percent--take place in the first trimester, at an average cost of $413, which can mean severe hardship for a poor woman. And if a woman wants to get a second- or third-trimester abortion--a procedure obtained typically by a woman who has made the decision to terminate her pregnancy because her health or the health of the fetus is in peril--she could face a hospital stay and a bill as large as $5,000.

"It's really frustrating," a 29-year-old Colorado woman who had a second-trimester abortion told the Wall Street Journal. "It's a woman's choice, and this infringes on that choice." The woman explained that she works full time, but can only afford catastrophic health insurance that doesn't cover abortion--so she had to clean out her savings and borrow from relatives.

And just who are the Democrats making common ground with anyway? The reality is that the Stupak Amendment is less about appeasing anti-choice Republicans--who were going to vote against the bill anyway--but bowing to anti-choice Democrats.

"The truth is that even with the Stupak restrictions, health care reform would leave millions of Americans far better off than they are now--including millions of women," wrote Washington Post columnist E.J., Dionne, who, like several liberal commentators, sees Stupak as a small price to pay for the health care bill's passage. "This skirmish over abortion cannot be allowed to destroy the opportunity to extend coverage to 35 million Americans. Killing health care reform would be bad for choice--and very bad for the right to life."

Here's a question for Dionne: The health care bill was supposed to give us more coverage, not less--and the last time I checked, wasn't abortion still considered a medical procedure?

THIS LATEST betrayal illustrates exactly how Washington views abortion--as nothing more than a political football.

But for women, abortion is a necessary medical procedure, like any other. When women don't have access to safe and affordable abortion procedures, they find ways to terminate unwanted pregnancies--even if it means putting their lives in jeopardy. Yet while the Democrats say their party stands for preserving a woman's right to choose, their actions show how easily they bargain that right away.

To the politicians, women's right to choose is expendable for the sake of political convenience. So what else is expendable? Immigrant rights? Civil liberties? Workers' rights? Desegregated schools? When the Democratic Party kicks women to the curb to prove that it is a "big tent" to people of all political stripes, then it's also showing just how many progressive causes it's willing to throw out of the tent.

Many people vote for the Democrats in spite of how they feel about what the party may say about other issues out of the fear of what the Republicans will do to abortion rights. And Democratic Party politicians do their best to fuel and exploit these fears.

If it wasn't clear before, it's clear now. The Democratic Party cares nothing about women's access to abortion, especially if you're poor.

Almost immediately after abortion became legal with the 1973 Roe v. Wade Supreme Court ruling, its opponents got to work limiting access. At a time when it was critical that access to abortion be buttressed, leading Democrats aided in the assault.

When the Hyde Amendment--which bars funds from the government's Medicaid health program for the poor from being used for abortions--was passed in 1976, President Jimmy Carter supported it. The gap that separates abortion being legal and being truly accessible was exposed almost immediately. Within just two month, a young Texas mother, Rosie Jimenez, died trying to obtain an illegal abortion because she couldn't afford a legal one.

When he campaigned for president in 1992, Bill Clinton relied on the support of pro-choice forces and promised to pass the Freedom of Choice Act (FOCA) and put an end to the Hyde Amendment. But this commitment didn't endure long beyond the campaign. Clinton didn't lift a finger to pass the FOCA. And when the newly elected Democrats in Congress got their chance to show what a Democratic majority looked like in 1993, they backed the Hyde Amendment instead, passing it 255 to 178. A quarter of the women in Congress voted for it. So much for the so-called "Year of the Woman."

Like Carter before him, who said of the Hyde Amendment, "As you know there are many things in life that are not fair, that wealthy people can afford and poor people can't," Clinton told Michael Kramer of Time magazine:

I've always been ambivalent on the federal-funding issue. All Roe v. Wade said is that the government shall not take a position on abortion. [The Supreme Court] guaranteed the right to have one, but didn't get into money matters. Many people view abortion as murder, and even many who don't are against their tax dollars being used to finance it, regardless of the circumstances.

The fact is, there are lots of rights, like the right to travel, that are not exercised equally because there is no governmental obligation to provide everyone with money so they can all travel to the same degree as everyone else. Abortion is in this category. Guarantee the right, but leave the question of who pays largely to the states.

POLITICIANS AREN'T the only ones who played politics with women's access to abortion. The groups that are supposedly organizing for women's right to choose have, too.

Because organizations like the National Organization for Women and NARAL have focused single-mindedly on the goal of getting Democrats elected, they have accepted, and even embraced, many of the stances that see abortion as less than a right for women.

When so-called supporters of choice view abortion as anything other than a medical procedure that a woman alone should have the say in obtaining, they put abortion into question. So when women's groups began accepting in the 1990s the argument that abortion be "safe, legal and rare," they weren't simply making a concession to achieve common ground on abortion rights--they were caving to the forces who want to see abortion outlawed completely.

These groups are following the lead of the Democratic Party politicians they support--like 2008 presidential candidate Hillary Clinton, who when asked "Could you see yourself, with millions of voters in a pro-life camp, creating a common ground, with the goal ultimately in mind of reducing the decisions for abortion to zero?" at a 2007 forum, answered:

Yes. Yes. And that is what I have tried to both talk about and reach out about over the last many years--going back, really, at least 15 years, in talking about abortion being safe, legal and rare. And by rare, I mean rare. And it's been a challenge, because the pro-life and the pro-choice communities have not really been willing to find much common ground. And I think that is a great failing on all of our parts.

But there can be no "common ground" between those who support women's right to choose and those who oppose it. They are on opposite sides.

It was pragmatism about getting something passed, no matter how weak, that fueled FOCA's failure. When NARAL calculated that FOCA wouldn't pass in Congress unless a parental consent restriction was included, the next thing they conceded on was public funding. The argument was that in the long term, abortion rights would be expanded. Then, in 1993, Hyde passed yet again. Several Democrats abandoned the cause of FOCA, and it died before it came to a vote.

Since their approach had long been to wine, dine and lobby the politicians who are supposed to protect Roe v. Wade, groups like NOW and NARAL have accommodated to the approach of the most moderate politicians, and allowed abortion access to be whittled away a piece at a time--with every mandatory waiting period and parental consent restriction.

So it was a shock, but only for a minute, when I read an e-mail from NARAL on November 9, decrying the threat posed by the Stupak Amendment, yet offering no form of response other than to click on a button and help raise money. For what? To plead with the Democratic politicians who pro-choice organizations have already handed over millions of dollars?

"P.S.," wrote NARAL's Nancy Keenan, "If the anti-choice fringe wins in the Senate, women throughout America would face the greatest restriction on abortion in a generation. Your gift is needed right now to help us defeat this ban on PRIVATE insurance coverage for abortion in the new health system...coverage that millions of women already have. Please help us protect choice for millions of women."

And, writes Emily Douglas in the Nation, "NARAL, though it is running a petition asking Sen. Harry Reid to keep Stupak-like language off the Senate bill, has not yet drawn a line in the sand. 'We don't have an answer to that question,' Crane told me when I asked whether NARAL would support a health care reform bill with Stupak-like language attached."

The Democrats and the women's groups that are tied to them can't be allowed to have it both ways--scare people about what the Republicans might do if they take office and ask for compromise after compromise when the Democrats are in power.

We've had enough of compromises. Supporting abortion rights shouldn't be a political calculation--it's a question of women's equality. That's why we need to build a new movement, from the bottom up, to defend abortion rights.