David Wilson is a New York-based immigrant rights activist, contributor to the Weekly News Update on the Americas Web site, and co-author of the book The Politics of Immigration: Questions and Answers. He was visiting Haiti as part of a delegation to observe the Papaye Peasant Movement, a cooperative movement in the Central Plateau, and was in Port-au-Prince at the time of the earthquake. Here, he talks to Lucy Herschel about what he saw--and what lies ahead for Haiti.

PLEASE DESCRIBE what rescue efforts you saw on the ground in the first several days after the earthquake--both "official" efforts and how ordinary Haitians were responding.

ACTUALLY, MOST Haitians I saw were far from "ordinary." The morning after the quake, people in our neighborhood were already hard at work digging out. A few were clearly injured or in shock, but the rest were improvising stretchers to take the wounded to the few clinics that weren't damaged, covering the dead with sheets, cleaning up.

Groups of young men were trying to find survivors in the rubble and dig them out with hand tools or their bare hands, sometimes at considerable risk to themselves.

As for the official response: on the first day, I saw all of five Haitian police in uniforms, sitting on chairs in front of a building downtown. They wouldn't tell us what they were doing or let us photograph them. This is the police force that the U.S. rebuilt and trained with a lot of hoopla starting in 1994. As for the 9,000-member United Nations force, all I ever saw of them was helicopters and occasional troop transports. 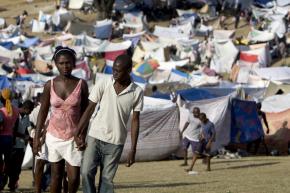 I left on the morning of January 17, five days after the quake, and where I was in the south of the city, I still hadn't seen any type of aid being distributed. I did see some rescue workers from Belgium, but I never saw anyone distributing water, food or shelter.

There were reports of sporadic looting on the last two nights I was there, but I never saw any. I walked around by myself in the daytime, and a photojournalist and I went out once at night to observe a rescue operation and interview people. We never had any problems or felt threatened--except by the five cops we'd seen downtown.

WHAT DO you think of the contention that food and water distributions or food drops from airplanes, could have provoked riots?

HAITIANS HAVE community groups, they have churches and other types of organizations, and there are NGOs that work on the ground and have a relationship with the communities. The logical way to distribute aid is to do it through these existing groups, or at least in consultation with them.

I can't see why there would be any danger of rioting if you did this. The people I saw and talked to in the streets were generally cooperative and helpful--they didn't strike me as rioters.

MUCH INK was spilled in an attempt to portray poverty in Haiti as a result of voodoo pacts with the Devil or cultural inferiority. Can you talk a little about how "free trade" policies and investment ventures pushed by the likes of Bill Clinton have affected the country?

I'M NOT an economist or a Haiti expert, but people I talked to in the peasant movement felt these "free trade" policies ruined small farmers by putting them in direct competition with giant U.S. agribusiness firms. Thirty years ago, Haiti produced almost all of the rice it consumed; now it buys most of it from the U.S.

The only "voodoo" here--with no disrespect for the actual religion of vodou--is coming from U.S. economists and economic planners at the IMF.

As for Bill Clinton, his project is for more assembly plants. Over the summer, the Haitian government beat back a big movement to raise the minimum wage to $5 a day for these plants. They won't even pay $5 a day, and they claim this will lead to economic development? Sweatshops don't develop economies. They just increase profits for big corporations.

THE OTHER stereotype being peddled is Haitians as hapless victims in need of our charity, but unable to run their own affairs or defend their own interests. Can you talk a little more about the mass movement last year to raise the minimum wage?

THOUSANDS OF assembly plant workers shut down the industrial park near the airport for several days last August to demand that the minimum wage be raised to $5 a day. After walking off the job, they marched into the center of the city, blocking traffic and joining up with ongoing student protests.

It had to be one of the most militant and dramatic actions anywhere, ever, by maquiladora workers, who in this case were largely young women. Eventually, the police and UN forces wore them down, and in the end, parliament set the minimum wage for assembly workers at a little more than $3 a day.

In the U.S., there was virtually no coverage of this, not even in the progressive media, which is a shame. I think international solidarity could have made a big difference, and I hope people here will be ready to do better the next time.

THE OBAMA administration has announced that undocumented Haitians living the U.S. will be granted Temporary Protected Status (TPS) for the next 18 months. Can you talk about what impact this is likely to have on Haitians here and in Haiti?

THE KEY word here is "temporary." What we need as a nation is a real, permanent solution--a sensible immigration policy that provides some sort of full legal status for everyone who works here. At the same, time we have to stop the government from pushing the sort of economic policies that force Haitians and others to come here looking for jobs.

Under TPS, the U.S. allows immigrants from a specific nationality to remain here for a period of time because of a problem like a natural catastrophe in the home country.

One problem with this is that the government's decisions often seem arbitrary. Why didn't Haitians get TPS in 2008 after two hurricanes and two tropical storms devastated much of the country? Another problem is that because it's based on nationality, TPS has the potential to divide immigrants from different countries, and the immigrant rights movement needs unity, not division.

On the plus side, I heard that yesterday, on January 23, immigration authorities released Jean Montrevil, a Haitian American activist here in New York City. They had been planning to deport him early this month--right before the earthquake. I hate to think what might have happened.

WHAT ELSE should we be calling for regarding Haitian immigrants in the aftermath of the earthquake?

I THINK we should use the earthquake to highlight some of the injustices of the immigration system. For example, the case of Jean Montrevil is a good example of what's wrong with the policy of deporting immigrants who have committed crimes here.

It's unfair for immigrants like Jean who have served out their prison terms and have gotten their lives back together. It means punishing them a second time--and in this case, deportation might have been a death sentence for Jean if he'd been sent back before the earthquake. And in cases where the deportees haven't been rehabilitated, it's unfair to a country like Haiti to dump them there, given that most of them got their education in crime here in the U.S.

Haiti has enough troubles without having to deal with our crime problems.