Oregonians vote to tax the rich

Tim Koch and Adam Sanchez explain the significance of Measures 66 and 67 in Oregon, which won approval from voters in a special election on Tuesday.

WHILE RIGHT-WING pundits were crowing about Scott Brown's victory in Massachusetts, voters in Oregon sent a different message to the nation: Tax the rich. That's the meaning of the passage of Measures 66 and 67 in Oregon in a special election January 26.

Like most states, Oregon is dealing with one of the largest budget deficits in its history--$4.4 billion. In state after state, the story is familiar. As the ranks of the unemployed rise, income taxes decline and, as foreclosures mount, property taxes plummet.

During the neoliberal boom of the last 35 years, state governments typically cut taxes for corporations and the wealthy, and put the majority of the tax burden on the middle and working classes, and now most states are finding huge holes in their budgets.

Since states are required by law to balance their budgets, this means that while the federal government is injecting a record stimulus into the economy through tax cuts and spending increases, the 50 state governments must do the opposite. 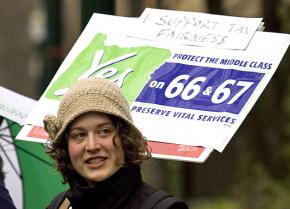 In Oregon, the state legislature decided that rather than push through budget cuts that would put the entire deficit on the backs of working people, they would try to bring in $727 million through raising taxes on some of the wealthiest Oregonians and corporations operating in the state.

Originally, big business was at the table, helping the Democratic-run legislature craft new tax proposals. But when the lobbyists demanded a temporary tax proposal that would have put more of the burden on small businesses than large corporations, and that would have raised taxes on all Oregonians, rather than the top 3 percent, the Democrats--for once--held their ground and passed Measures 66 and 67.

Measure 66 slightly raises taxes on the top 3 percent of earners in Oregon and exempts 270,000 unemployed Oregonians from taxes on their first $2,400 in unemployment benefits. Measure 67 raises the corporate minimum tax in Oregon, which has been on the books since 1931, from $10 to $150, and slightly raises tax rates on upper-level profits.

AFTER THE measures passed through the legislature, the Chambers of Commerce and big business associations banded together with anti-tax "tea party" activists to get enough signatures to put the tax measures on the ballot. They filled their campaign coffers with donations from Nike billionaire Phil Knight and Columbia Sportswear CEO Tim Boyle, and poured millions of dollars into deceptive advertisements proclaiming the horrors of raising taxes during a recession.

Luckily, voters didn't buy it. Thanks to hundreds of volunteers who spent hours knocking on doors and making phone calls to urge a yes vote, Measure 66 passed by more than 100,000 votes and Measure 67 by a slightly smaller margin.

According to some analysts, it was liberal Portland and surrounding Multnomah County that imposed a yes vote on the rest of the state--because they represent about a third of the state's overall population. A closer look at county-by-county tallies, however, tells a different story. Take rural Wasco County with a population of just over 8,000 people. There, the vote split right down the middle--with 3,970 for Measures 66 and 67 and 4,095 against.

Similar breakdowns were seen in many rural counties. While Multnomah's vote was key to the ultimate victory of the measures, the margin by which it passed is explained by the number of yes votes coming from rural and traditionally conservative counties.

The passage of the tax measures in supposedly anti-tax Oregon should make it apparent that people are sick of budget cuts, and are ready to make the rich pay their fair share. Indeed, Measures 66 and 67 represent the first time that Oregon voters have approved an increase in income tax rates in over 80 years.

Oregonians have repeatedly shot down attempts to impose a sales tax (Oregon is one of six states with no sales tax) and "sin" taxes (on liquor and cigarettes). What makes Measures 66 and 67 different is that they targeted the wealthiest 3 percent of income earners and large corporations. Also, Measure 66 gives a big break for the 270,000 or so Oregonians who collect unemployment benefits.

But these measures weren't just about taxes. The top donors to the campaign opposing Measures 66 ad 67 spent far more money cranking out misleading ads than they will actually have to pay in increased taxes.

While the passage of these measures won't end Oregon's budget crisis, they represent a challenge to the neoliberal ideology that brought the global economy to its knees. They open the door to the idea that since the rich have done so well when times are good, perhaps they should pay more when times are bad.