The claim that the Tea Party protests represent a grassroots movement is a fraud--but it's the Democrats' policies of the last year that allowed the right to posture as populists.

GUN-TOTING right-wing extremists and the Republican Party politicians who pander to them are getting away with masquerading as "populists"--thanks both to a media that laps up the ranting of the Tea Party crowd, and to pro-business Democratic policies that have hurt working people.

On April 14, it was more of the same from Sarah Palin as she spoke to an adoring crowd of several thousand Tea Partiers assembled in Boston to protest the Obama administration. "Is this what Obama's 'change' is all about?" Palin asked, before delivering her by-now signature line as the crowd roared: "I want to tell them, 'Nah, we'll keep clinging to our guns and our Constitution and our religion, and you can keep the 'change.'"

Of course, guns, religion and the Constitution aren't the only things Palin is clinging to these days. According to media reports, she's made $12 million in personal income since quitting her job as governor of Alaska.

The rally in Boston was one of several tea party events around the country on April 14-15 to coincide with Tax Day. Among those speaking alongside Palin in Boston was Minnesota Rep. Michele Bachmann, who may be best known these days for having urged her constituents to refuse to fill out the 2010 Census because it was a federal government plot. (Until, that is, it became clear that an incomplete census could cost Minnesota a congressional seat, most likely hers--then, she was suddenly pro-census.) 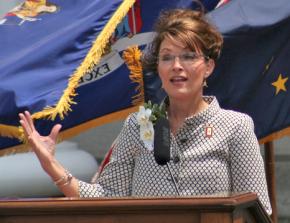 The rants about Obama as a big-government-loving socialist and "government-run" health care leading to the end of capitalism are no surprise. But behind the "gollies," "youbetchas" and flat-out ignorance displayed by the likes of Palin, there's a more sinister aspect of the Tea Party movement, one that was on display earlier this week when dozens of "patriots" gathered for an April 19 anti-Obama rally on the Potomac River--with their guns.

The Washington Post reported before the protest that one attendee named Daniel Almond:

plans to have his pistol loaded and openly carried, his rifle unloaded and slung to the rear, a bandoleer of magazines containing ammunition draped over his polo-shirted shoulder. The Atlanta-area real estate agent organized the rally because he is upset about health-care reform, climate control, bank bailouts, drug laws and what he sees as President Obama's insistence on and the Democratic Congress's capitulation to a "totalitarian socialism" that tramples individual rights.

The fact that the so–called "Restore the Constitution" rally took place on the 15th anniversary of the bombing of the Oklahoma City federal building was a mere coincidence, said organizers.

But speakers at the event included several of what the Post described as "heroes of the militia movement, including Mike Vanderboegh, who advocated throwing bricks through the windows of Democrats who voted for the health-care bill" and "Tom Fernandez, who has established a nationwide call tree to mobilize an armed resistance to any government order to seize firearms."

DESPITE WHAT the media would have us believe, the Tea Partiers aren't a movement of ordinary, working-class Americans bristling at corporate excesses and big government.

On the one hand, it includes hard-core right-wingers like those who rallied on the Potomac. These are the "activists" who spent the day before the House vote on health care legislation last month screaming racist slurs at Democratic Reps. John Lewis and Emmanuel Cleaver, and calling Rep. Barney Frank a "faggot."

On the other hand, there are well-funded Republican lobbying groups behind the tea party protests. The Tea Party Express, for example, a national bus caravan that toured Palin, is the brainchild of Joe Wierzbicki, a Republican political consultant with the Sacramento firm Russo Marsh & Rogers. According to Politico.com:

Aided by campaign-style advance work and event planning, slick ads cut by Russo Marsh, impressive crowds and a savvy media operation, the political action committee run by Wierzbicki, Russo Marsh founder Sal Russo and a handful of other Republican operatives has also emerged as among the prolific fundraising vehicles under the tea party banner.

Known as Our Country Deserves Better when it was founded during the 2008 election as a vehicle to oppose Barack Obama's campaign for president, the PAC saw its fundraising more than quadruple after it took the Tea Party Express public in July, raising nearly $2.7 million in roughly the following six months, compared with less than $600,000 in the preceding six months, according to Federal Election Commission filings.

This is the wing of the movement that's home to Wall Street conservatives and GOP operatives--who can disguise their desire to kill even the tamest financial reform proposals behind tea party rhetoric about the need for "small government" and "tax relief."

Republicans are hoping to ride the tea party train back into power in Washington, but no amount of fake populism can cover up the reality of who makes up the base of this supposed "grassroots" movement--among them, for example, crackpots like the so-called "birthers," who doubt Barack Obama's citizenship.

This may be one reason why the Republican Party's newest star, Massachusetts Sen. Scott Brown, didn't participate in the April 14 Boston Tea Party Express rally. Insiders say Brown is trying to not be too closely affiliated with the Tea Partiers for fear this could damage his 2012 re-election bid.

The Tea Party is nothing new. It represents a relatively small minority of Americans on the right end of politics, and it will not determine the outcome of the 2010 elections.

In fact, both major parties stand to lose if they accept the laughable notion that this media-created protest movement is the voice of true populism. Democrats will spend their time chasing votes they will never win. Republicans will turn their party into an angry and narrow redoubt with no hope of building a durable majority.

NEVERTHELESS, IT'S still true that the Republicans--reduced to a squabbling laughing-stock after the 2008 election--have managed a comeback that few people would have predicted when Barack Obama took office 15 months ago.

To the extent that the GOP has regained momentum and the tea party movement does get a hearing among ordinary people, it's most of all because Obama and the Democrats have given up so much ground.

Obama was elected on a wave of optimism that he really did represent a new direction for Washington politics, as he promised. But by administering a multi-trillion-dollar bailout of Wall Street and by spending the last year pushing through a compromised health care reform law that will penalize poor and working class Americans who can't afford coverage, the administration squandered much of that optimism.

The result, as a new Pew Research poll shows, is that growing numbers of people say they are disillusioned with government. As the Los Angeles Times reported:

Only 22 percent of all Americans surveyed said they trusted the government in Washington almost always or most of the time--among the lowest measures in half a century...The results point to "a perfect storm" of public unrest, Pew reports, "a dismal economy, an unhappy public, bitter, partisan-based backlash and epic discontent with Congress and elected officials."

Tellingly, however, the Pew survey found one big exception to the idea that people want less government: A majority of people (61 percent) favor stricter regulation of the way major financial companies do business--virtually unchanged since the question was asked a year ago.

That's a consequence of the huge popular anger with the Wall Street banksters. And it shows why the Democrats' tougher talk as they campaign to pass financial reform legislation--and, still more, the announcement that the Securities and Exchange Commission will file suit against Goldman Sachs for fraud--could change the tone of the debate in national politics.

The decision to go after Goldman--the super-bank that profited immensely from the housing bubble while it expanded, and then made still more money when it collapsed and the federal government stepped in with a bailout--is long overdue. The delay probably has something to do with the number of Goldman Sachs alums who showed up in key positions in Obama's Treasury Department.

Still, if the Democrats continue to focus on Wall Street wrongdoing, this will shift the mainstream political discussion.

For one thing, this would expose the fake populism of the Tea Partiers. The Republicans in Congress, with few exceptions, are determined to oppose anything the Democrats put forward to regulate Wall Street. So the Tea Partiers will have a tough time explaining why their favorites in Washington are taking a stand to defend Goldmans Sachs from the "intrusions" of big government.

Second, the spotlight on Goldman's fraud has refocused attention on the disastrous consequences of casino capitalism. For the left, the opportunities to talk about the failure of the free market system and why we need an alternative have reemerged.

This doesn't mean, of course, that the Obama administration will push for real financial reform--or that it will punish more than a few scapegoats. The instinct of the mainstream Democrats in charge at the White House will be to talk tough about Wall Street's crimes to build pressure on Congress--but to compromise on the substance of the legislation and come up with a version that the bankers can live with.

This is the reality about populist rhetoric, whichever mainstream party it comes from.

Republicans and Democrats have to talk about standing up for ordinary people against special interests in order to win votes. But that's a sham of the two-party system. Both parties are devoted to defending the status quo and serving the interests of the business and political elite that bankroll them--and that control the U.S. political system.

As Dionne writes, "Yes, there is authentic populist anger out there. But you won't find much of it at the tea parties."

It will be up to ordinary people to organize and turn this anger into action. One first step will be to expose the Tea Partiers, and to stand up against the bigotry and hate they spew. But we also need to speak out for a political alternative, independent of the two-party system, that genuinely puts the interests of working people first.