Alexander Billet reviews a new album that looks back at a 1980s socialist band.

IT'S A trend as familiar to pop music lovers as the sound of a guitar being tuned. A band comes along, makes a splash, and releases an album and an impressive handful of singles. They tap into exactly how the kids feel and gain a loyal following as a result. Then, without warning, they break up and recede into the shadows. Overnight, the group, their music and the excitement they generated are all forgotten.

Such is the case with the Redskins, a British band who gained a notable amount of popularity in the 1980s for their blistering, punked-up version of unabashedly radical soul music. That a band like this might be pushed to the margins is tragic enough, but given the potential for them to find a new audience, there is a certain sigh of relief that comes with Insurgence Records' release of the Redskins retrospective Epilogue.

The Redskins' records are hard enough to find in the UK. In the U.S., they have an added two strikes against them. Most American leftists are likely to think of a racial slur when they hear the band's moniker. On top of that, explaining what their name actually did mean is hindered by the stereotypes of skinheads as neo-nazis. 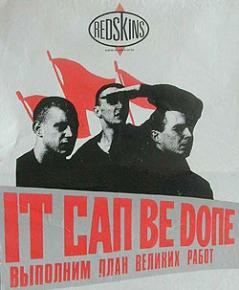 In this particular case, that couldn't have been less true. When Chris Dean, Martin Hewes and Nick King came together in 1981, it was as the punk group No Swastikas. All three were indeed skins--complete with the Dr. Martens, the 501 jeans, the Harrington jackets. But they were also of the left, and Dean and Hewes were members of the Socialist Workers Party (SWP).

"The misconception has always been that skinheads were all right wing, which they were not," said Dean in a 1986 interview. "If you look at the Specials audiences, the 2 Tone [ska] bands, Madness, there were a lot of skinheads, a lot of anti-racist skinheads and left-wing skinheads and socialist skinheads. The name Redskins came from a group of skinheads in Sheffield who were in the Communist Party...Some were in the Labour Party, some in the Socialist Workers Party."

That tendency became best defined when No Swastikas evolved into the Redskins. Soul music had been a big part of skinhead culture since its inception in the '50s, along with ska, reggae and R&B. The advent of punk and its crossover with ska in the '70s had lead to a big revival of the movement.

Even as Hewes' bass took on a hip-shaking bounce and Dean's voice mimicked the visceral growl-and-wail of soul's pioneers, the energy of punk's early years continued to be heard in their songs. Dean, when asked to describe the group, once quipped that the Redskins wanted to "walk like the Supremes and talk like the Clash."

THE POLITICAL landscape the group faced was far less favorable than bands of their ilk had found in the '70s, however. Margaret Thatcher had become prime minister in 1979, and had placed everything from unions to public industries to Northern Ireland in her crosshairs.

Thatcher's open war on the working class might have been what provoked the Redskins to be so unabashedly...well, red, in their early work. Their first single, released in 1982 on the CNT imprint, was "Peasant Army," which appears on Epilogue. More punk than soul, it's a high-octane piece of three-chord agitation that lays the slogans on thick.

The B-side, "Lev Bronstein" (which also appears on the collection) is even heavier on the rhetoric; not many artists would title their songs after the birth name of Russian revolutionary Leon Trotsky. But the beginnings of the group's recognizable swing can clearly be heard in Dean's guitar work and drummer King's incorporation of bass and toms.

During their career, the Redskins would release only one album, Neither Washington Nor Moscow, in 1986. It would eventually reach number 31 on the UK Albums Chart and remains the best introduction to the Redskins' work.

Songs like the hard-burning "Bring It Down (The Insane Thing)," the steady finger-snap of "The Power is Yours," and horn-driven freneticism of "Kick Over the Statues" sadly don't appear on Insurgence's retrospective.

That being said, there are still some amazing gems for the uninitiated on Epilogue. Two tracks in particular, neither of which appear on Washington/Moscow, showcase the band at their absolute best. "A Plateful of Hateful" mixes a stutter-step drumbeat and rousing horns with passionate pleas to "free the people!" And the live version of "Don't Talk to Me About Whether" manages to capture the raw soul-power the group brought to their performances.

The demo version of "Keep On Keepin' On" provides similar a window into what made the Redskins such a successful act for their time and place.

When the band appeared on the popular British music show The Tube on November 9, 1984, Britain was gripped by a miners' strike that became the most heated labor dispute in a decade. Thatcher had long been public about her intention to privatize the coal pits and close several others, but in the early months of '84, the government went forward with the plan--which would lead to the loss of over 20,000 mining jobs.

The National Union of Miners, lead by the militant Arthur Scargill, took to the picket lines in March. By the end of the month, miners were in pitched battles with cops from Scotland to Yorkshire to South Wales. Despite fierce opposition from the authorities and universal denunciation in the mainstream press, almost 200,000 workers would go out over the yearlong strike, and hundreds of thousands of other union activists and radicals would be galvanized.

The Redskins threw themselves into solidarity with the striking miners. They had already played several shows to benefit the strike fund, and when they performed on The Tube, they started by taking a dig at Labour Party leader Neil Kinnock for his unsupportive stance. Then, in after their first song, they brought up a miner--aptly named Norman Strike--to give a brief update on what was happening on the picket lines.

Strike's speech, however, wasn't to be heard. His microphone had been cut off. Nonetheless, the Redskins launched into "Keep On Keepin' On," a song written expressly in solidarity with the strike.

Can't remember such a bitter time
The boss says jump, the workers fall in line
I'm not down, but I'm feeling low
They whip us into line
With the threat of the dole
Time and time when the workers rise
The fightback's stabbed by a neat backstab
And the papers' lies
Leaders lead us into blind retreat
One by one we take the money
Ten by ten we face defeat

Dean ended the number with an outright declaration of "Victory to the miners!" The incident with Strike's microphone would cause a controversy in the press the next day, but the censorship didn't stop the Redskins' performance from reaching others sympathetic to their message. Mark "Bazza" Barrett writes in the liner notes for Epilogue:

I was blown away. The song was all about the Miners' Strike and the workers' struggle. I'd always had left-wing leanings since getting into the 2 Tone bands a few years before. But here was a band that really struck a chord with me. The lyrics hit home and that sound...I just loved the Soul-sounding brass on that song. I was won over...For the next two years, the Redskins became a big part of my life. I even ended up joining the Middlesbrough branch of the SWP.

ULTIMATELY, THIS is what Epilogue displays incredibly well--that ever-shifting interplay between music and struggle. Not just how music influenced the people, but how people influenced the music.

As a retrospective, this album pulls it off, briefly but effectively chronicling their evolution from a straightforward punk group to a band whose sound and stance personified the unity and steadfastness that working people so desperately sought to cling to at that time.

Sadly, that fragile relationship might have also been at the root of the Redskins' demise. In March 1985, the miners strike ended in defeat. Thatcher privatized and closed the pits after all, the strongest union in the UK was crushed, and in some mining towns, unemployment climbed to 50 percent. The Labour-Left, too, was greatly demoralized, and many perceived it as a major coup for Conservatism's control of British politics.

The Redskins would break up in late 1986, during the low point of the downturn in British class struggle. Hewes would work as a motorcycle courier before becoming a music teacher. Dean would leave the SWP in 1988 before taking up a reclusive life in Paris. A tiny but loyal base of left-wing music fans is really all that's prevented the group from sinking into the bottomless morass of forgotten artists.

Such a prospect might be still more tragic today, at a time when the Redskins' refrains--hold tight, organize, resist--have more resonance than they've had in a great long while. This alone justifies the release of Epilogue. That the music really is just that good is merely an added bonus.

First published at the Society of Cinema and Arts Web site.