Anti-Muslim bigotry won't just go away or be forgotten. It has to be challenged.

That's how The Daily Show's Jon Stewart revised Barack Obama's 2008 campaign slogan to better reflect the president's spoken-out-of-both-sides-of-his-mouth attitude toward the racist hysteria over plans to build an Islamic community center in lower Manhattan near the site of the World Trade Center.

On August 13, Obama made a seemingly unequivocal defense of the right of Muslims to build the center. "As a citizen and as president, I believe that Muslims have the same right to practice their religion as everyone else in this country," Obama said. "And that includes the right to build a place of worship and a community center on private property in Lower Manhattan, in accordance with local laws and ordinances."

But the very next day, Obama "clarified" his remarks, saying, "I was not commenting and I will not comment on the wisdom of making the decision to put a mosque there."

The flip-flop only added fuel to a controversy that has exposed the ugly racism of the U.S. political establishment in the era of the "war on terror." 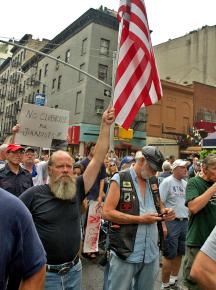 The reactionary blowhards who seem to call the shots in the Republican Party started the frenzied complaints about building a mosque so close to "hallowed ground." But the willingness of liberals like Obama to abandon their supposed commitment to tolerance and give ground to the racists has allowed the bigotry to thrive and spread.

Still, last week also provided a glimpse of how an active opposition can change things. On August 22, opponents of anti-Muslim hate mobilized on a few days' notice and held a counter-protest against the bigots and in support of the proposal for the Islamic center. For the first time, the media had to acknowledge that the racists weren't speaking for all New Yorkers or all Americans.

THE FUROR over the mislabeled "Ground Zero mosque" began weeks ago, when right-wing Republicans like Sarah Palin and Newt Gingrich sensed an opportunity to score cheap political points.

They began speaking out against plans by the Park51 group to build an Islamic community center called Cordoba House--including a prayer space--several blocks away from the site of the World Trade Center. The flames were fanned by Fox News and conservative media outlets, as well as Tea Partiers and other right-wing groups.

Palin took to Twitter in July to call on "peaceful Muslims" to "pls refudiate" the mosque proposal. Her message showed the naked bigotry of the opposition to the Islamic center. Somehow, any Muslim supporting the Park51 project was "non-peaceful"--a terrorist, by implication.

An anti-Park51 commercial paid for by the National Republican Trust PAC featured images of "jihadists" training with guns and the destruction of the Twin Towers--with a narrator intoning, "On September 11, they declared war against us. And to celebrate that murder of 3,000 Americans, they want to build a monstrous, 13-story mosque at Ground Zero."

Who is this "they" exactly? According to the logic of the right, all Muslims are responsible for 9/11. Never mind the Muslim victims who died in the September 11 attacks, or that there isn't a shred of evidence to suggest that anyone involved with the Park51/Cordoba House proposal has any ties to terrorism.

Simply being Muslim in America was enough to find them guilty.

Sometimes, though, you don't even have to be Muslim to be a target--you just have to look like you might be.

That's what happened to a construction worker who had the misfortune to wander into the midst of an anti-Park51 demonstration in Manhattan on August 22. Video of the event shows the dark-skinned man wearing a skullcap being pursued by screaming demonstrators. "No mosque here!" the crowd shouts at him. One person tells him to "Run away, coward." Another speculates that "he must've voted for Obama." Still another shouts, "Mohammed's a pig."

Such vicious scenes are being repeated in other cities and towns--from Temecula Valley, Calif., where anti-mosque Tea Party demonstrators encouraged people to bring dogs to terrorize Muslims during Friday prayers; to Gainesville, Fla., where the Dove World Outreach Center is planning a "Burn the Koran Day" on September 11 to oppose what it calls the religion "of the devil."

Daisy Kahn, one of the Park51 organizers, told ABC News' Christiane Amanpour that the response to the project "is like a metastasized anti-Semitism. That's what we feel right now. It's not even Islamophobia; it's beyond Islamophobia. It's hate of Muslims, and we are deeply concerned."

As shocking as the behavior of the right has been, the spinelessness of political leaders who claim to stand against racism and for tolerance has been equally infuriating.

A few days after Obama spoke out of both sides of his mouth, Senate Majority Leader Harry Reid issued a statement declaring that "the mosque should be built someplace else." And there's Howard Dean, the supposed "liberal maverick" of the 2004 campaign for the Democratic presidential nomination, who said the Islamic center would be "a real affront to people who lost their lives, including Muslims," on September 11.

None of these crusaders for civil liberties bothered to point out that the "hallowed ground" secured for the Park51 project is currently an abandoned Burlington Coat Factory building--or that the area around "Ground Zero" contains all kinds of businesses, including strip clubs and off-track betting parlors.

If the location isn't too "sacred" for the New York Dolls Gentleman's Club, why is it too sacred for Cordoba House?

Meanwhile, Fox News commentators and others have done their best to smear the founder of the Cordoba initiative and leader of the Park51 project, Imam Faisal Abdul Rauf.

Rauf has been accused--on the basis of no evidence whatsoever--of getting funding for the center from Iran. Other pundits claim that Rauf has "blamed" America for the 9/11 attacks--despite the fact that Rauf has repeatedly spoken out against extremism in Islam, and is himself a Suffist, a practitioner of a mystical current of Islam noted for its moderate and ecumenical teaching.

It is a cynical attempt whip up racism--and to build support for the U.S. empire, and its wars and occupations in the Middle East and beyond.

THE ATTACK on Muslims and their religion isn't confined to the U.S.

In France, conservative President Nicolas Sarkozy is championing a law that bans Muslim women from wearing the burqa or niqab in public places. In Britain, the new government led by Prime Minister David Cameron of the Tory Party is stoking a panic about young Muslims as the sharp edge of a campaign to further restrict immigration. (Not surprising, prominent anti-Park51 campaigner Pamela Geller has repeatedly expressed support for the fascist English Defense League.)

Even in European countries with long social democratic traditions, racism is on the rise. In the Netherlands, the far-right Party for Freedom came in third in national elections in June, with 24 of the 150 seats in the second chamber of the country's parliament.

But in all of these cases, the right hasn't been alone in scapegoating Muslims and other immigrants.

In Britain, the Labour Party governments of Tony Blair and Gordon Brown led the way in putting restrictions on immigration. Following Labour's election defeat in May, Ed Balls, a contender for the party leadership, suggested that Labour should have restricted immigration even more--because immigrants supposedly have driven down British workers' wages.

In France, when the lower house of the National Assembly voted on the law to ban the veil, the opposition Socialist Party led a walkout of legislators. But a number of SP members stayed behind to add their voice to the nearly unanimous vote for the ban.

The point is that concessions made by liberals or center-left parties not only don't appease the right--they embolden it.

The anti-Muslim racists won't be stopped by hoping that cooler heads will prevail in Washington--or by not giving the racists the attention they seek. The right has to be challenged.

That's why the counter-protest in lower Manhattan last weekend was an important step in countering the hate. Organized by a coalition of left-wing, antiwar and anti-racist groups, the demonstration brought together a core of activists willing to make their voices heard. They spoke for many more people who aren't acknowledged in the "discussion" of the "Ground Zero mosque"--people who despise the right wing for exploiting the September 11 attacks to whip up racism and intolerance.

One protest won't turn the tide against Islamophobia. But along with other examples--such as the Tennessee activists who organized against a Christian Right-led campaign to block plans to build a mosque in Murfreesboro, Tenn.--the New York City demonstration offers a different path.

There's an alternative to waiting and watching as the right spews its lies and hate, and liberals let them do it. It's up to us to organize it.