The test score witch-hunt in LA

Jessica Kochick, a teacher in the Los Angeles Unified School District, looks at the anti-union agenda behind "value-added" evaluation of teacher performance.

THE SCHOOL year in the Los Angeles Unified School District is about to kick off--with two unpaid furlough days due to budget cuts and union concessions--and teachers and parents are grappling with a debate over a recent Los Angeles Times article "Who's Teaching L.A.'s Kids?"

The article unveils a study of individual teacher effectiveness in LAUSD, based on a "value-added measure"--meaning how much "value" an individual teacher has added to a student's expected yearly growth as measured by California standardized reading and math tests. If a student's test scores improve compared to his or her peers, the teacher has "added value"; if the student's percentile ranking drops, the teacher is deemed ineffective.

The Times published online the "effectiveness" of approximately 6,000 elementary school teachers, including their names, rankings and places of employment. This unethical move has already led to division, humiliation and mistrust among teaching staffs overburdened by layoffs and overcrowded classrooms. Parents, in turn, face a confusing set of results, often discovering that their favorite teacher has been deemed "ineffective." 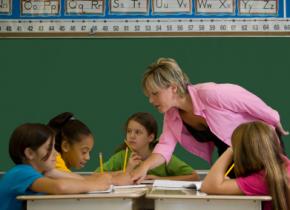 Ramon Cortines, superintendent of LAUSD, has stated that he would like a value-added measure to make up at least 30 percent of a teacher's evaluation. Not coincidentally, this is the percentage required on the Race to the Top grant application--the federal, competitive program that gives education money to states in exchange for punitive accountability measures.

California did not qualify this year for Race to the Top money. LAUSD was competing for about $120 million, not nearly enough to close its budget deficit.

THE VALUE-added model is very controversial. Respected research from both the National Academy of Sciences and the U.S. Department of Education's Institute of Education Sciences point to the instability of the results.

In several studies, up to 35 percent of individual teachers moved from the most effective group to the least effective group (or vice versa) from one year to the next. The researchers conclude that these statistical models should not be used for high-stakes decisions, like firing teachers or awarding merit pay.

A September 1 article in the New York Times acknowledged the problems with the value-added method:

For example, two analysts might rank teachers in a district differently if one analyst took into account certain student characteristics, like which students were eligible for free lunch, and the other did not.

Millions of students change classes or schools each year, so teachers can be evaluated on the performance of students they have taught only briefly, after students' records were linked to them in the fall.

In many schools, students receive instruction from multiple teachers, or from after-school tutors, making it difficult to attribute learning gains to a specific instructor. Another problem is known as the ceiling effect. Advanced students can score so highly one year that standardized state tests are not sensitive enough to measure their learning gains a year later.

The value-added model simply doesn't work. For one thing, it is extremely difficult to capture the effects of poor attendance, hunger, stress, personal hardship and motivation on student test scores. It is almost impossible to isolate teacher effectiveness from those variables.

Teachers feeling pressured to bring up test scores may end up neglecting the students most in need: students with special needs, language learners and students with poor attendance or behavior issues who may not take the test or who tend to score very low.

Additionally, the California Standardized Test (CST) is not vertically aligned and is not designed to measure student growth from one year to the next. In fact, The Standardized Testing and Reporting (CST) Web site states: "When comparing results for the CSTs, compare results only within the same subject and grade...No direct comparisons should be made between grades or between content areas."

For this reason, many more teachers in the higher performing schools are being deemed "ineffective." Across the board, of course, teachers who feel the pressure of evaluations based on test scores will begin to focus more heavily on testing items and test-taking techniques, rather than content, context and higher-order thinking.

The response from the leadership of United Teachers Los Angeles (UTLA) has been mixed. A.J. Duffy, president of the UTLA, has called for a boycott of the LA Times, asking all teachers to cancel their subscriptions. UTLA is organizing a protest at the newspaper's building to take place September 14 at 5 p.m.

On the other hand, Duffy has stated that he will reopen negotiations with the district over teacher evaluations. In the past, he has spoken out against tying teacher evaluations to student test scores. Now, however, he is currently refusing to state publicly whether that is negotiable. Thus, it is unclear whether the UTLA will hold firm on its previous stance and whether or not it will organize a long-term fight back with rank and file membership.

Many teachers argue that punitive evaluations tied to test scores do not enhance teacher quality. Not only do they narrow the curriculum, but they also hinder collaboration, create tensions among staff members and dissuade teachers from being self-critical and from seeking out help. Teachers and teacher educators who are opposed to the district's plan argue that teacher evaluations should be performed by educators--not by politicians or policymakers.

In fact, several schools within LAUSD have implemented more progressive reforms. In those schools, more time and resources are spent on peer support and mentoring, common prep periods, meaningful professional development and non-punitive evaluations that allow teachers to request help, receive feedback and improve their teaching for all students across content areas.

In order for more schools to take this approach--and to prevent the termination of emerging progressive school models--UTLA will need to wage an effective public campaign against standardized testing and test-based teacher evaluations.