Employer intimidation, government inaction and business unionism have prevailed for now at California health care giant Kaiser Permanente--but the battle for a fighting democratic union at the big chain of hospitals and medical facilities will continue.

That's the message of the National Union of Healthcare Workers (NUHW), which had sought to oust the Service Employees International Union (SEIU) as the bargaining agent for some 43,000 Kaiser workers in California. But a more than 19-month delay in the vote, collaboration between Kaiser and the SEIU, and the harassment of NUHW supporters combined to give SEIU a victory by a substantial margin--18,290 votes to 11,364.

In response, the NUWH has filed a lengthy complaint with the National Labor Relations Board (NLRB), available in pdf form here. The filing charges Kaiser with a variety of violations of labor law that, if upheld by the NLRB, could result in an election rerun.

The battle for Kaiser began more than two years ago when officials and members of the SEIU's giant health care unit, called United Healthcare West (UHW), challenged the International's increasing collaboration with management. Andy Stern, then president of the SEIU, placed the UHW in trusteeship and in early 2009 forced out its leaders--who went on to form the NUHW. Soon afterward, a majority of workers at Kaiser signed petitions calling for a union election to allow them to vote to join NUWH, rather than the SEIU.

But the SEIU maneuvered at the NLRB to delay what was the biggest union election at a private employer since the 1940s. That bought time for the SEIU and Kaiser to sow fear among workers that they would lose the gains of their previously negotiated contract. The SEIU spent tens of millions of dollars--some estimates put the figure at $40 million--to flood Kaiser properties with thousands of organizers conscripted from across the SEIU.

Sal Rosselli, interim president of NUWH and former president of the SEIU's UHW, spoke to Lee Sustar about the results at Kaiser--and the NUHW's plans for the future.

WHAT'S YOUR assessment of the Kaiser vote?

WE ARE confident that the election will be thrown out next year and rerun. This is a typical extreme boss campaign. They delayed the election for 20 months, and during that time, the SEIU's collaboration with Kaiser just scared people. There were such deep fears that folks would lose their contract, their wages, their benefits, even their jobs. And then Kaiser withheld a 2 percent raise last April for the 2,200 people who joined NUHW.

That was the central part of the SEIU's campaign. They told folks in Southern California that if you voted for NUHW, you would lose everything. This was reinforced by Kaiser. Even after the NLRB issued a complaint, Kaiser refused to implement the 2 percent raise. The NLRB issued the complaint months ago and issued an injunction, but not until October 1, when the voting had started.

My take is that the 11,000-plus who voted for us are by and large really committed to NUHW, and that's why they took the risk. It was scary. But the majority--the folks who voted for the SEIU--are folks who aren't involved in the union on a regular basis. They are folks who just believed that if they didn't do what they did, they would lose everything. They voted out of fear, not out of support for SEIU. 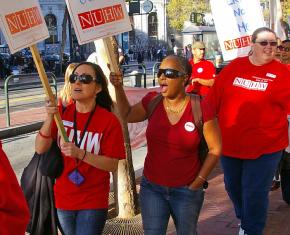 Now things will start to unfold in terms of the commitments that the SEIU made to Kaiser. More layoffs. Reorganizing. "Flexibility" that will disrupt peoples' lives. Every week that goes by, people will see what the SEIU is about in terms of lack of representation, lack of accountability and its deals with managers.

It's our belief that as the weeks go by, it will be demonstrated to people that they were lied to--because the NUWH folks in Southern California are going to get their raises with interest and everything else.

In the meantime, we're regrouping and focusing on contracts at facilities that have been certified, and bargaining contracts for those folks. We're going to do different contract campaigns and stabilize the NUHW. And we'll be getting ready for a number of elections that are now going to be scheduled at Sutter Health and Children's Hospitals.

IN SOUTHERN California, the SEIU sided with a union-busting law firm to advocate for no union in an election that they thought NUHW would win. Have they topped that behavior in the last few weeks?

WHAT THEY did at Kaiser absolutely tops that. Here are these two huge organizations--one of the biggest HMOs in the country and one of the biggest unions, with all of their resources--working together to make sure that the SEIU won.

Wait until you hear about the examples of what happened. They brought in hundreds of new SEIU staff from outside California and gave them Kaiser-issued electronic badges to give them total access to anywhere in Kaiser hospitals and clinics--anywhere.

And, of course, at the same time, they were preventing the NUHW from gaining access, even in Southern California, where we represent workers in some facilities. They were actually driving our folks out of cafeterias--public places--and, of course, not allowing our materials in break rooms. Kaiser bulletin boards were loaded up with SEIU campaign materials. We couldn't put up a flyer. We couldn't even hand out flyers in Kaiser facilities.

Kaiser let the SEIU use their conference rooms for captive audience meetings on work time, campaigning for them and against us. We have a lawsuit that we filed against Kaiser about them actually paying SEIU contract specialists to campaign for SEIU full time. That's a potentially criminal charge against Kaiser representatives that we'll follow up on. These were Kaiser resources illegally used to campaign for the SEIU.

WHAT'S HAPPENING in terms of the SEIU's representation of workers on the shop floor?

WE HAVE declarations from contract specialists who stated that they were ordered by [SEIU United Healthcare West trustee] Dave Regan not to represent workers. Their only responsibility was to campaign against NUHW. They were told not to file grievances during the campaign.

WHAT DID you think of the media's portrayal of this fight?

THE MEDIA and some of these labor experts are giving their opinions that it's unlikely the election will be overturned. Well, they don't know anything about the objections--about what Kaiser's done. You know the public relations machine that the SEIU has.

THE SEIU has a PR machine, but NUHW has a network of grassroots supporters in the labor movement. What's your message to them?

NUHW MEMBERS and supporters are committed for the long term. We will have more elections, and we will need more help. People are very serious about getting control of their union.

In the last week, in two systems, the SEIU agreed to layoffs. In Daughters of Charity Health System, where we hadn't had a layoff in 15 years because of our contract language, SEIU just agreed to over 100 layoffs. And at Salinas Valley Memorial Hospital--where we won an election by a 3-to-1 margin several months ago, but where SEIU is interfering with certification, so they still represent the folks--they agreed to 120 layoffs. That's who SEIU is.