A passion for the cause of justice

ON THE evening of Thursday, December 23, our beloved friend and comrade Kevin Chojczak was killed in a car accident just outside of his hometown of Turlock, Calif.

The news of his death has left us all in a state of shock and grief. As news of his passing has spread among those who knew him in the Bay Area, the Central Valley, California and the rest of the country, the reaction of surprise and sadness speaks volumes about the deep impression Kevin Chojczak left on us all.

Kevin was one of the most gentle, thoughtful and genuine people you could meet. Everyone who worked with him as a teacher, union activist or revolutionary socialist felt safer and more at ease in his presence. He had remarkable patience and empathy with people and was willing to listen to anyone about politics, and about the troubles we all face in life.

Kevin had time for everyone. As a friend, he could be counted on to spend a few hours talking and listening in a café, at your home or even at a demonstration. He had the amazing ability to address people's uncertainty, doubts and the difficulties of daily existence--whether it had to do with health care, education, layoffs, pension reductions, the housing crisis or something else--and to frame them with their connections to the injustices produced by capitalism.

Kevin was active in the teachers' union here in San Francisco and played a vital role in building the reform caucus, Educators for a Democratic Union (EDU). He was extremely proud of the work we all did in the caucus and was respected by all for his effort and the spirit he brought to the work. As one person from EDU wrote in response to the news of his passing, "He was fully devoted to his work as a paraprofessional and organizer. He continues to inspire me to treat people with respect, regardless of political affiliation. I am deeply saddened by the news of his death. I will miss him."

Kevin was a dedicated educator who had worked at a number of schools at all levels of education, from Balboa and Lincoln High Schools to SF Community Elementary. Working as a special educator at SF Community, he channeled his energy into students who needed extra attention. He brought the same passion to his students as he would to his politics. Students and staff members equally loved Kevin for the warmth he gave to his work. Hard-to-reach students would quickly become excited about learning when Kevin was involved. Staff members were challenged to think deeper through his influence.

Kevin was also active in the local immigrant rights movement. He believed in amnesty and full legalization for the undocumented, and in a world without borders. He played an important role in organizing several May Day rallies in San Francisco, and worked to build defense networks against raids and deportations.

WHAT IMPRESSED us the most about Kevin, in addition to his deep commitment to his friends and comrades, was his commitment to socialism. Kevin had a deep hatred of the injustices and racism that he saw growing up in his hometown of Turlock. He became a Marxist in large part because of the poverty and inequalities he saw in his own community--particularly the plight of the migrant workers in the Central Valley and the racism and hate that came along with their exploitation.

Kevin's experiences in public education and the immigrants rights movement in the Bay Area cemented his heartfelt conviction that the system of capitalism had to be uprooted and replaced with socialism, and that working people were capable of running a more just and sane world based on human need. 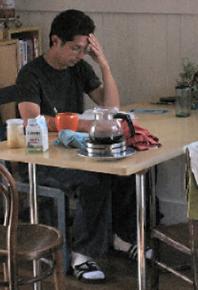 Kevin was a voracious reader of political theory, history and literature. All of us have a memory of running into Kevin at a café or local taqueria, engrossed in some book with his notepad nearby. He embodied some of the best qualities of what Lenin referred to as a "working-class intellectual"--a socialist whose personal experience of the system gives them the "fire in the belly" to wage a sustained fight for change, combined with a knowledge of political theory that helps them understand that system.

Part of what made Kevin such an effective organizer was his ability to listen to others and take in their thoughts and ideas, while having such firm understanding of his own. All his comrades in the International Socialist Organization learned something from him about Marxist theory, imperialism, politics in Latin America, U.S. labor history or nearly any political issue you can think of. He had a fierce commitment to educating people about revolution. Few people synthesized action and ideas as well as our comrade, Kevin Chojczak.

Kevin's commitment to social change was matched by his love and devotion to his family. Virtually everything he did or thought was influenced and shaped by his relatives in Turlock, who loved him and supported him in all he did. If Kevin wasn't at a demonstration on a given weekend, it would often be because he was taking a weekend trip to visit his parents or sister, or to help a family member in need.

All our thoughts and prayers are with Kevin's family, who have sustained such a devastating loss. We encourage anyone who knew Kevin to share your memory of him with his family's online guestbook.

Here in the Bay Area, we are all deeply saddened by this loss. We all know that the struggle for a better world is a long and hard one. But going through the struggle with fighters like Kevin gave us all a boost in confidence and made it feel a little easier.

Kevin, we thank you for your dedication to social justice, and to your friends, colleagues and comrades. We are all deeply disappointed that you will not be joining us in the struggles ahead. But we will do our best to carry on with the grace, passion and kindness you showed us all. We love you. We will miss you, and we will never forget you.