The West goes to war for oil and power

Tom Arabia and Alan Maass report on the first stage of a U.S.-led war on Libya.

U.S. AND European forces began a war on Libya on Saturday with warplane and missile strikes hitting weapons and defense systems controlled by Muammar el-Qaddafi and his regime.

The Western assault will be portrayed as a "humanitarian" mission to stop Qaddafi from carrying out an offensive targeting the mass rebellion against his regime. But the long record of "humanitarian" intervention shows that the bombs and guns of the U.S. and its allies are never used to save lives or bring justice, but to serve Western interests--and Libya is no different.

Anyone who has been inspired by the wave of revolts against dictators in North Africa and the Middle East--including the one in Libya--must oppose this new attempt by the U.S. and its allies to reassert their domination in the region, because it will be used to try to stifle the struggle for democracy.

The attack by a coalition of countries, with the support of several Arab nations--but with the U.S. acting as the "leading edge," according to American military officials--is described as the first phase of an operation called "Odyssey Dawn" to implement United Nations Security Council Resolution 1973, passed on Thursday. Targets were hit across north Libya, from airports near the capital of Tripoli to military positions on the outskirts of the city of Benghazi, which has been a stronghold of the rebellion against Qaddafi. 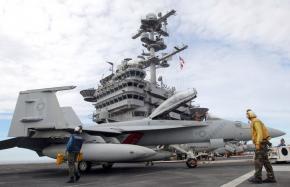 The aim, according to the governments carrying out the attack, is to destroy the regime's ability to resist enforcement of a no-fly zone. But the Security Council resolution lays the basis for a much broader war, and operations are expected to escalate to a "no-drive zone" and possibly the use of ground forces, in parts of Libya or the whole country.

The attack came as Qaddafi's forces began an offensive against Benghazi, after a scorched-earth campaign that has pounded rebel forces in the past week. Within days of its beginnings in mid-February, the uprising against Qaddafi seemed on the verge of toppling one of the longest-running dictatorships in the world, but the regime has used its overwhelming military advantage over the rebellion to win back most of the northwest of the country around the capital of Tripoli, as well as a string of port cities leading toward Benghazi.

Libya's government claimed to have implemented a cease-fire on Saturday and invited UN fact-finding missions to verify it, but numerous reports from both Western and other media sources described a stepped-up campaign against Benghazi, with opposition fighters coming under constant mortar and artillery fire.

With attacks from the air, the U.S.-led assault on Libya might prevent some of Qaddafi's forces from entering rebel-controlled and civilian-populated areas like Benghazi, but as the U.S. intelligences consulting firm Stratfor wrote, "it cannot force the withdrawal of those forces from within the city without risking significant civilian casualties...The application of airpower entails civilian casualties, and it remains unclear if that application can be translated into the achievement of political objectives in Libya."

That raises the potential of large-scale bloodshed among the very people who have rebelled against Qaddafi--and a war that will have to escalate beyond limited missile strikes and air patrols to accomplish the stated objectives of Western governments. D.B. Grady, a former paratrooper with the U.S. Army Special Operations Command and veteran of the Afghanistan war, explained the dynamic in an interview on National Public Radio:

I'm unaware of any no-fly zone that's been imposed by the United States that didn't ultimately end up with military intervention that actually put soldiers on the ground. Bosnia and Herzegovina started out as Operation Deny Flight...If you look at Iraq, we established the no-fly zone in 1991. The no-fly zone ended in 2003 with Operation Iraqi Freedom.

IN CHEERLEADING the U.S.-led assault to "stop a massacre," the American media never stopped for a moment to question Washington's selective concern about violence and repression.

Even as the Security Council was passing a resolution that U.S. Ambassador to the UN Susan Rice insisted was "to protect innocent civilians," the Washington-allied monarchy in the Gulf state of Bahrain was shooting down anti-government demonstrators. The most that U.S. diplomats could manage in this case was calls for "restraint" and "talks."

Also the very same day as the UN resolution was passed, U.S. military forces were directly responsible for 40 deaths in Pakistan, when missiles fired from American drone planes hit a community assembly or jirga, in the Nevi Adda Shega area of North Waziristan. These deaths come a few weeks after a NATO air attack killed nine Afghan boys in early March, and in the wake of at least 29 people killed in protests in U.S.-occupied Iraq in late February.

The other element missing from media coverage of the Libya attack is a three-letter word familiar from past U.S.-led wars in the Middle East: oil.

Libya exports about 1.5 million barrels of oil a day and possesses one of the largest oil reserves of any country in Africa. Western oil companies have done a booming business with the dictator Qaddafi over the past decade, devoting huge investments to the country.

That was only possible because of the rehabilitation of the regime as an ally. Qaddafi has been the villain before for U.S. politicians--during the 1980s, when Ronald Reagan called him the "mad dog of the Middle East" and launched his own war on Libya. But in between, the one-time villain became a friend. As Todd Chretien described in an article for SocialistWorker.org:

While the Cold War was still on, the U.S. considered Libya an enemy, and Ronald Reagan targeted the country in the 1980s, including an attempt to assassinate Qaddafi by bombing one of his residences (which killed his 15-month-old daughter).

But in the late 1990s, Qaddafi began to make peace with his former adversaries. And after 9/11, Qaddafi offered Libyan support for the U.S. government's "war on terror" under George W. Bush. The regime restored diplomatic relations with the U.S., leading ExxonMobil, Chevron and other American corporations to rush into lucrative exploration and production deals.

Before the threat of military intervention escalated, Guardian columnist Seamus Milne commented: "The same Western leaders who happily armed and did business with the Qaddafi regime until a fortnight ago have now slapped sanctions on the discarded autocrat and blithely referred him to the international criminal court the United States won't recognize."

Given this record of hypocrisy, neither the U.S. government nor its European allies--and not the Arab states like Qatar that are going along with the war on Libya either--can be trusted to have decent motives. The real reasons for the assault on Libya have nothing to do with saving the Libyan people from Qaddafi. They are about oil profits on the one hand--and reestablishing U.S. and European influence in a part of the world that has experienced two revolutions--in Egypt and Tunisia--since the start of the year.

This war won't bring justice. It has to be opposed.