The traditional picture of child labor is of something that takes place in poverty-stricken, less-developed countries. But the hidden reality is that in the richest country in the world, hundreds of thousands of children will never know a childhood that doesn't include the stress, fatigue and cruelty of work.

In this article published in Socialist Worker on July 2000, Sharon Smith described the reality of child labor in the U.S.--as well as the fight against sweatshop conditions around the globe.

WHEN I was growing up as a child in the 1960s in Providence, R.I., I did homework when I wasn't in school.

But the term "homework" had nothing to do with school for myself or my family. Homework meant work--paid manufacturing work that we performed in the kitchen or in the cellar that we shared with another family.

My family took in homework for the costume jewelry industry. At night after school got out, we put together necklace chains, linking the chains by hand with a pair of pliers. Over the summer, when we didn't have to go to school, my mother, my sister and I spent the day in a cellar with no windows and no ventilation.

We took a pair of tweezers, dipped it into a jar of acid and pulled out a piece of lead the size of a pinhead. We put the piece of lead on top of part of an earring or ring--which my father then soldered when he got home from his regular job.

We got paid according to a piece rate, which was based upon each tray of earrings that we finished--each tray of 144 pieces of earring, each with a tiny piece of lead on it. I never made anything close to the minimum wage, because, at age 9, my fingers just wouldn't move fast enough to get enough trays finished. 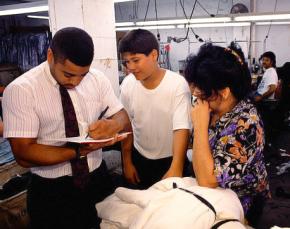 My experience of homework meant that--by the age of 9--I would never again experience the feeling of a carefree childhood.

It was dirty work. And we worked under the constant pressure of worrying that we would get busted for doing something illegal.

We were always working under time pressure because the jewelry industry is seasonal, and summer is the rush season. And homework is sub-sub-contracted--a factory sub-contracts the work to a sweatshop, which then turns around and subcontracts the homework to individuals. They then push these individuals to turn around the work so they can get it back to the factory.

Technically, the factories don't know about this--much like Nike and Kathie Lee today claim not to know about labor violations in their factories abroad. And chances are that there are no labor department statistics documenting homework in the jewelry industry, then or now.

But in Rhode Island when I was growing up, everybody knew about it. As a matter of fact, in the 1970s, the Rhode Island legislature came close to passing a law making homework legal.

And the last time I was in Rhode Island, when I drove by my old neighborhood of Olneyville, I saw that the same subcontractor which gave us homework in the 1960s--Ron Dee Jewelry, it was called--is still there.

The same black, suspicious-looking storefront on the main street running through Olneyville. So I guess Ron Dee Jewelry hasn't been busted in the last 30 years for violating child labor laws.

BUSINESSES THAT do get caught for child labor violations get nothing more than a slap on the wrist. In fact, an Associated Press (AP) investigation several years ago found the typical fine that the government gives to employers who violate child labor laws ranges from $275 to $850.

The maximum fine that can be imposed is $10,000. But that fine is only given when a child is killed or seriously injured on the job. And even if your company gets fined, chances are that if you don't pay it, nothing will happen--three-quarters of all fines for child labor violations are never collected.

AP's investigation estimated--using the government's own statistics--that close to 300,000 children were working illegally in 1996. Yet the U.S. Labor Department claims that child labor is nearly impossible to find. "I don't believe we have ever found it," said Jorge Rivero, the Labor Department district director in Miami. It doesn't exist, he told reporters, and "if it does, we don't know about."

That about sums up the U.S. Labor Department's attitude toward child sweatshop labor--see no evil, speak no evil, hear no evil. If we don't see it, it doesn't exist.

Yet AP reporters had no trouble at all finding child laborers. Less than an hour away from Miami, in a single day, reporters found eight children working on farms near Homestead, Fla. "The Labor Department can overlook children working illegally even when someone else has found them and put it in writing," an AP reporter observed.

There are two ways that the Labor Department manages to keep child labor statistics low. First, they have almost no inspectors to catch violators. The average U.S. state has 8.5 inspectors for the entire state. Secondly, the few inspectors who do exist don't make much of an effort to find violations.

Maria Echaveste, an assistant to President Bill Clinton, said she has trouble getting inspectors out to the fields to check for child farm labor. "Where would you rather be--in a nice air-conditioned office and interview some accountant or look at their records?" she said. "Or would you rather get up at five in the morning to go out to some field to see who's working?"

A realistic estimate of how many children overall are working illegally today in the U.S. isn't available. But it's without a doubt far higher than either the U.S. Labor Department or even the U.S. labor movement acknowledges.

THE POINT of describing my own history is to make the point that child labor in this country is widespread. To look at me today, most people would probably never suspect that I was gainfully employed at the age of 8.

The fact is that homework and child labor exist wherever there are sweatshops--wherever you have a labor-intensive industry like the garment industry, which relies on cheap labor instead of heavy equipment to turn a profit.

It's estimated that more than half of all garments made in the U.S. are produced in sweatshop conditions. You can accurately conclude on this basis that child labor is rampant in the garment industry in the U.S.

Chances are that you don't need to look very far in your own city to find sweatshops, homework and child labor. It's probably taking place right under your nose.

This isn't to say that labor conditions in the U.S. are the same as in Indonesia or China or Vietnam--or in the maquiladora factories just south of the U.S. border with Mexico. There's no question that the scale of poverty in poor countries means that child labor is massive--and that corporations like Nike get away with paying workers less than subsistence wages.

Approximately one in four children around the world are engaged in paid labor, by one estimate. According to the International Labor Organization, in developing countries, 250 million children between the ages of five and 14 work--almost half of them full time.

This is, of course, no comparison to what exists in the U.S. But the reality of child sweatshop labor in the U.S. means that it isn't good enough to demand a "Made in the USA" label as a guarantee that workers are paid a minimum wage and given a minimum number of rights on the job.

And it means that workers in the U.S. have far more in common with workers in Third World countries than generally has been acknowledged, even inside the labor movement.
It's not true that U.S. workers contribute to global inequality by "over-consuming."

Shopping at Wal-Mart doesn't lead to the super-exploitation of impoverished workers in poor countries. The blame lies squarely with the corporate monsters that care nothing for human dignity--who care nothing for the people they treat like slaves.

More people are starting to realize this--because of the lessons being learned in struggles around the U.S. The recent battles include:

-- The demonstrations against the World Trade Organization in Seattle and the International Monetary Fund and World Bank in Washington, D.C.

The fight against globalization and the super-profits that multinational corporations make at the expense of people's lives.

The movement of anti-sweatshop student activists who care enough about low-paid workers that they have been occupying their universities this spring, forcing a growing number of schools to sign up with the Worker Rights Consortium monitoring system for garments that bear university logos.

What's more, the AFL-CIO's recent decision to take a stand in support of undocumented immigrant workers in the U.S. marks a complete reversal from where it stood until now.

This stand isn't just in words but in action. That was shown by the June demonstration in Los Angeles sponsored by the AFL-CIO to protest the criminalization of undocumented immigrants.

Most importantly, all this means that workers from different countries are beginning to realize that the only way to fight in the global economy is through cross-border organizing. Why should we recognize the borders that benefit only the filthy rich corporations?

This is opening up, for the first time in 80 years, the possibility of building an internationalist working-class movement, united against a common enemy. This movement is founded on the strength of the unionized working class, from rich and poor countries alike, standing in solidarity with the less well-organized sections--like child laborers or sweatshop workers.

In fact, sweatshop workers are struggling and going on strike in larger numbers in Indonesia, Vietnam, China, Mexico and elsewhere. They need our support--and at long last, they are beginning to get it.

Suddenly, at the beginning of the 21st century, the words that Karl Marx and Frederick Engels wrote in the Communist Manifesto more than 150 years ago have become something more than a remote dream of an unfulfilled possibility.

Let's fight together to win a society where no worker will be forced to work like a slave, where no children will be robbed of their childhood and where human beings around the world can live with the human dignity and decent standard of living that everyone deserves. No longer should the people who do all the work get none of the luxuries--while those who do none of the work wallow in luxury.

The people who today are exploited and oppressed by the system are the very same people who should be running the system. That is the possibility opening up before us in the 21st century--if we unite and fight to build a socialist society.

First published in the July 7, 2000, edition of Socialist Worker.