From cultural expressions of sexism to growing restrictions on reproductive rights, the gains of the women's movement are being taken back. Elizabeth Schulte examines the consequences--and reports on the stirrings of a new opposition to Sexism USA.

JOE SCARBOROUGH couldn't keep a straight face as his MSNBC co-host tried to report the news of International Monetary Fund head Dominique Strauss-Kahn's arrest after a housekeeper in a New York hotel said he had sexually assaulted her.

The woman--found hiding in the hallway, according to a supervisor, visibly traumatized and trembling--said Strauss-Kahn trapped her in his suite, attacked her and forced himself on her.

But for Scarborough, it was all fun and games, as he laughed about the assault on the air. Others in the press followed suit as they excavated details about the victim--while Strauss-Kahn was referred to in "boys will be boys" fashion with his nickname "The Great Seducer."

Then came the comparisons of the Strauss-Kahn attack to the latest high-profile celebrity sex scandal, involving former California Gov. Arnold Schwarzenegger's out-of-wedlock child--as if an alleged rape and a consensual affair were interchangeable examples of men "behaving badly."

This display was one more example of the lack of seriousness toward the issue of sexual assault--and of the sexist attitudes that pervade U.S. society, even as women are told we live in a "post-feminist" era where we're all equal now and therefore have nothing to complain about. And if you do complain, your either "don't have a sense of humor" or are "turning women into victims." 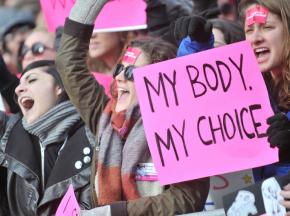 The chapter--whose former members include Presidents George Bush Sr. and Jr.--was eventually suspended, but this isn't the only example of sexual harassment on campus. In 2008, Facebook photos appeared depicting Zeta Psi brothers in front of the campus women's center--which provides sexual assault counseling--holding signs that read, "We love Yale sluts."

According to Justice Department statistics, one in five college women will be the victim of a sexual assault. And that percentage is likely to be low, since fewer than 5 percent of assaults will be reported to campus authorities or the police.

There's little mystery to these numbers when you hear about what women endure when they try to obtain justice by official means.

Hear Elizabeth Schulte at Socialism 2011 in Chicago, speaking on "A woman's place is in the revolution: Class struggle and women's liberation." Check out the Socialism 2011 website for more details.

For example, Laura Dunn had to spend a whole year on campus attending classes with one of the men she said raped her at the University of Wisconsin in 2004. As Dunn told Time magazine:

It was as if they were going above and beyond to ensure nothing would be done in my case. I felt extremely disappointed to know that the institution in charge of ensuring my safety did not recognize the massive distress the sexual assault caused me. Furthermore, I was disappointed that when I sought justice through their system, I was treated with hostility and disrespect. I was clearly not believed and was often blamed for what had happened.

OF COURSE, blaming women isn't isolated to college campuses. It reaches into the halls of Congress.

Earlier this year, Republicans tried to include language redefining rape into a bill that would ban federal funding for abortions, arguing that the definition should be narrowed to include only "forcible rape." In other words, it would be the responsibility of the victim to prove that she tried to fight off her rapist in order to qualify as being raped.

Public outrage over the proposed change forced Republicans to eventually drop the amendment. But it exposed something telling about the Republican agenda--that it's anti-women to its core.

The Republicans want to roll back the gains of past social movements, such as Social Security, good union wages and the promise of a social safety net. And they see the scapegoating of women--particularly of poor and working-class women--as an important component of this assault.

So when politicians target Planned Parenthood, they're seeking to ban funding for the abortion services it provides--even though these serves don't even get federal funding--but they're also trying to cut funding to all of Planned Parenthood's women's reproductive health services.

The Republicans (and some Democrats) claim that they're standing up against "women who want taxpayers to pay for their abortions." This accomplished, it's easier to take aim against more targets, such as "greedy public-sector workers," people on Medicare or workers who need extended unemployment benefits.

In this context, it makes complete sense for Republicans to try to mandate that women prove they tried to fight off their rapist. It's the politics of blame and scapegoating--and women are one of the primary targets.

In the meantime, by almost every measure, the quality of life for poor and working-class women is getting worse.

According to the most recent U.S. Census Bureau statistics, on average, a woman earns 77 cents for every dollar a man earns in a similar occupation. For the 34 percent of working mothers who are their families' only breadwinner, the gender pay gap isn't just bad for them but for their whole family. It translates into poor living conditions, poor nutrition and fewer opportunities for their kids.

And the gap grows greater as women get older. Women earn about 90 percent of what men earn until around the age of 35. After 35, women's median earnings decrease to between 70 and 80 percent of the median earnings of men, and remain there until retirement.

This, of course, doesn't take into account the unpaid labor that women still disproportionately perform in the home. For example, a recent study by the Commonwealth Fund found that women are twice as likely as men to be the provider of informal health care for an ailing family member at home. Typically, these caregivers come from lower-income households, where some 40 percent live in households with incomes below 200 percent of the federal poverty level.

According to the Labor Department, in 2010, women represented 46.7 percent of the U.S. labor force, and they were nearly twice as likely as men to work part time. This wasn't a personal choice, as it is sometimes depicted in the mainstream media--in 2010, one in five women were working part-time because they couldn't find full-time work. Prior to the recession, that number was less than one in 10.

Women, especially unmarried women, are less likely to have health insurance. And when women do have coverage, insurance companies routinely charge them higher premiums than men--in some cases up to 48 percent more--for the same plan. Women also have higher out-of-pocket costs and greater rates of being "underinsured."

And at a time when there is an obvious crying need for a greater social safety net--for women and men--Washington is demanding that we all tighten our belts.

ALONGSIDE THE assault on women's living standards and quality of life has come an ideological assault--in the mainstream media, the entertainment industry and in advertising. According to those leading the assault, women are so "liberated" that it's okay to treat them like sex objects.

This new definition of "liberation" is based on a proposition further promoted in the 1990s that the gains of the civil rights and women's movement of the 1960s and '70s--like affirmative action and women's and multicultural studies programs--represented a "liberal takeover" that had gone "too far." Because of "political correctness," the argument went, people were being denied their "freedom of speech."

Such claims have nothing to do with freedom and liberation--and everything to do with sexism and bigotry. Yet the argument that men have a "right" to be sexist has largely won over the popular debate.

This ideological assault was part and parcel of an attempt to turn the clock back on women's liberation in general.

In the late 1960s and early 1970s, the women's movement took inspiration from other struggles of the time--for civil rights and Black Power, for gay and lesbian liberation, opposition to the Vietnam War. By making their demands heard on the streets in protest--for equal pay, an end to sexual harassment and abortion rights--the women's liberation movement was able to fundamentally transform the way that people thought about women in U.S. society.

American society went from an era in which women couldn't get birth control legally without being married to the legalization of abortion. By putting tens of thousands of people into the streets, the movement made the U.S. population at large more aware of women's inequality and the need to fight for liberation.

This gained expression in larger events like the August 1970 nationwide demonstration of 50,000, with the demands of free abortion on demand and no to forced sterilization, 24-hour community controlled child care, and equal pay for equal work.

It was seen in smaller ways, too--for example, the 1,000 postcards that came into Ms. Magazine when editors asked readers to send in their names to be published in an ad that proclaimed, "We have had abortions."

And contrary to the conservative idea that the women's liberation movement divided men and women, it actually joined greater numbers of people in solidarity with one another. Like the members of the Puerto Rican Young Lords Party, who included women's right to reproductive freedom among their list of demands, likely convinced by their sisters in Committee for Abortion Rights and Against Sterilization Abuse. Among the Lords' slogans was "Abortion under community control."

For some people today, proof of women's liberation was the fact that a select group of women were able to advance themselves in Corporate America or win political office.

But that conclusion couldn't be further from the truth. While a small elite may have risen to the top, the majority of working-class women were left behind. And in the absence of any significant movement defending the rights won three decades ago, the powers that be have been able to push back. So the rights of women have been chipped away--most obviously exemplified in the increasing restrictions on women's reproductive rights.

Similarly, the history of the women's movement has been rewritten by conservatives who claim that it went "too far." So in the 1990s, conservatives like Morning After author Katie Roiphe got away with writing that feminists had created an atmosphere of "rape crisis melodrama" on college campuses that turned women students into "helpless victims."

This flew in the face of what women actually thought. As Susan Faludi pointed out in her 1991 book Backlash: The Undeclared War Against American Women, "Women themselves don't single out the women's movement as the source of their misery. To the contrary, in national surveys, 75 to 95 percent of women credit the feminist campaign with improving their lives, and a similar proportion say that the women's movement should keep pushing for change."

However, without a movement that could provide opportunities for people to mobilize to show this sentiment, this view went largely unexpressed--and sexist ideas have been allowed to flourish, unopposed.

But the last months and years have brought signs--such as the Walk for Choice protests earlier this year, and the SlutWalk demonstrations to protest the blaming of women for sexual assault--that many people, women and men, have had enough, and want to stand up and say something about it.