Picking up where Bush left off

New FBI guidelines that will allow the government to more easily persecute activists are an integral part of the Obama administration's attack on civil liberties.

In a new edition of its "Domestic Investigations and Operations Guide," the bureau gives greater leeway to spy on citizens and carry out surveillance against political and religious groups--in other words, a license to persecute political opponents.

The regulations are further evidence of the Obama administration's continuation--and in fact, expansion--of Bush-era attacks on civil rights.

When he was elected, Barack Obama--a former law professor, after all--was expected to curb the worst excesses of the Bush administration, particularly where civil liberties were concerned. Instead, as with many other issues, the Obama administration has actually gone farther than the Bush administration--while attracted less challenge from liberal organizations that would have raised an outcry against similar measures from the Republicans. 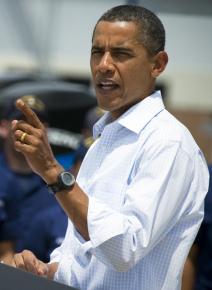 As the New York Times put it in a recent editorial, "The Obama administration has long been bumbling along in the footsteps of its predecessor when it comes to sacrificing Americans' basic rights and liberties under the false flag of fighting terrorism. Now the Obama team seems ready to lurch even farther down that dismal road than George W. Bush did."

AT ISSUE is a move by the FBI to allow its 14,000 agents greater latitude to spy on U.S. citizens who are not suspected of any crime--by searching databases, trawling through individuals' household trash, or carrying out surveillance on people who have "attracted the agency's attention"--an ominously vague category.

In a new edition of the Bureau's guidelines, the rules are relaxed for what is called an "assessment"--in which the FBI determines whether a person or group poses a national security or criminal threat, even if there is no reason for suspicion of actual wrongdoing.

Under the new rules, agents will be allowed to take steps such as databases searches without first opening an assessment. "Assessments" were created by the FBI in 2008 as a way to "allow agents to look into people and groups 'proactively' where there is no evidence tying them to possible criminal or terrorist activity." In other words, a way to justify a fishing expedition.

Now, what little brake existed in the process has been removed.

The new manual also removes a previous requirement that extra supervision be applied when public officials, reporters or academics are investigated for activities unrelated to their positions (such as drug cases)--opening the door to acts of political prosecution.

Particularly noteworthy for activists is a revision in the regulations that, according to the Associated Press, removes "a limitation on the use of surveillance squads" and allows "an agent or an informant to surreptitiously attend up to five meetings of an organization, such as a religious group."

The last part is particularly troubling given the number of trumped-up cases since September 11 in which Arabs, Muslims or left-wing political activists have become targets of the FBI and been either falsely accused of crimes--or lured into participating in crimes--by FBI informants and agents.

As Michael German, a former FBI agent and now a lawyer for the American Civil Liberties Union, told the New York Times, "Claiming additional authorities to investigate people only further raises the potential for abuse."

The justification for loosening restrictions on agents is that the FBI--the world's most powerful domestic law enforcement operation--has become hamstrung by "too many rules."

This is a complete fiction. Just the Bureau's recent history, the Times noted, "includes the abuse of national security letters to gather information about law-abiding citizens without court orders, and inappropriate investigations of antiwar and environmental activists."

THE FBI's long and sordid history is riddled with attempts to target and smear those who oppose the official policies of the U.S. government, including antiwar activists, socialists, unionists, and religious and civil rights leaders. From the agency's persecution of communists and socialists during the McCarthy era to the vicious Counter-Intelligence Program (COINTELPRO) and surveillance aimed at civil rights leaders like Martin Luther King and Black Panther activists in the 1960s and '70s, the agency has always acted as the federal government's domestic political watchdog.

A 1967 memo from then-Director J. Edgar Hoover, for example, stated that the purpose of COINTELPRO was "to expose, disrupt, misdirect, discredit and otherwise neutralize the activities of Black nationalist, hate-type organizations and groupings, their leadership, spokesmen, membership and supporters, and to counter their propensity for violence and civil disorder."

The result of COINTELPRO? A campaign of harassment, intimidation and violence that led to the jailing and even murder of dozens of Black Panthers and other activists. The new relaxation of FBI regulations opens the door for similar kinds of abuse.

This attempt to give the FBI more leeway in spying operations isn't an anomaly. It fits squarely into the Obama administration's widening of the Bush-era war on civil liberties--from keeping Guantánamo Bay open, to renewing surveillance powers put in place under the USA PATRIOT Act, to invoking "state secrets" to shield the administration from scrutiny on such issues.

In recent months, the Obama administration ramped up an attack on socialists, antiwar and Palestinian rights activists with FBI raids on the homes and offices of Twin Cities and Chicago-area activists--followed by the issuing of subpoenas to 23 activists to appear before a federal grand jury as part of an investigation into supposed "material support" for groups on the State Department's list of "designated foreign terrorist organizations."

Such attacks are designed to chill dissent and protest--nothing less.

The FBI isn't the "good guy protecting America" that it claims to be. During the 1960s and '70s, the exposure of COINTELPRO policies and the FBI's dirty tricks educated a generation of activists about which side the state and its political police are really on. But we should remember today that state repression ultimately failed to hold back the rising tide of the civil rights and anti-Vietnam War movements.

As the Obama administration continues to spend billions for wars and occupation abroad while pressing for austerity for workers and the poor at home, repressing civil liberties is part of the government drive to make sure its policies aren't seriously challenged. A society where a tiny minority controls the wealth while millions endure poverty and oppression will always depend on such repression.

But as ruthless as the FBI has been in the past--and as ruthless as the agency is capable of being in the future--it has never been able to crush the spirit of resistance in the U.S. As civil rights activist Stokely Carmichael once said of the FBI:

We saw them exactly for what they were, not the way television presented them. We saw what cowards they were. We saw their racism, their defense of segregated policies. When somebody's house was burnt up, we knew who did it. The people always knew...The FBI office was right next to the local police. They were chummy, chummy pals. They were sharing information. But nothing they did stopped us from organizing.