Why did the unions retreat?

Lee Sustar looks at the impact of the strike at Verizon and what comes next.

THE STRIKE at Verizon Communications--the most active and militant big labor showdown in the U.S. in many years--ended suddenly after two weeks with no new contract in place, leaving strikers and supporters asking "why," as they debate how to continue the fight for a good contract while back on the job.

Some union activists, frustrated that they are back at work empty-handed, are planning work-to-rule campaigns, in which workers follow job requirements to the letter, no matter how long it takes. Although the terms of the old contract remain in place, the unions retain the ability to strike at any time.

The battle began August 7 when some 45,000 members of the Communications Workers of America (CWA) and the International Brotherhood of Electrical Workers (IBEW) hit the picket lines after Verizon refused to back down from sweeping concessions, including forcing workers to pay a share of health insurance premiums for the first time.

Yet from the beginning, CWA President Larry Cohen made it clear that the strike wasn't an open-ended fight for a new contract. It had a limited objective, he said--forcing the company to negotiate seriously. It was, as one veteran CWA insider put it, "a strike for a meeting." 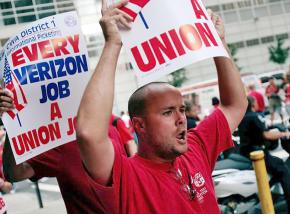 Despite this limited aim, the strike quickly became a major confrontation. Within 48 hours, lively picket lines were harassing management scabs at garages and offices, with striking technicians following Verizon trucks to set up mobile pickets.

Meanwhile, union members and supporters began picketing and leafleting at nonunion Verizon Wireless stores, and labor and community activists around the U.S. followed their example in a solidarity campaign that recalled the support for last winter's labor mobilization in Wisconsin. Verizon, which has spent the last decade polishing its corporate image since its creation through mergers, became a symbol of corporate greed.

Unlike bankrupt auto companies and budget-strapped state and local governments, Verizon has plenty of money. It is highly profitable, having gained $10.2 billion in profits in 2010. But the company still wants $1 billion in labor concessions that would both take an estimated an average of $20,000 out of workers' pockets, while undermining workplace organization.

The outcome of this struggle will be felt widely. If Verizon prevails, it will be a major blow to blue-collar unions that have already been accepting concessions without a fight--including eliminating traditional pensions and cutting wages in half for new hires. But if the unions at Verizon hold the line, it will be a rallying point for workers, union and nonunion, who are looking for a way to resist the downward pressure on their living standards since the recession began nearly four years ago.

THE POPULARITY of the strike rattled Verizon management. Alarmed by damage to the Verizon brand, the company dispatched its lawyers to court to obtain injunctions to limit the number and activity of pickets. Several strikers were arrested.

Then, however, the company promised to reset bargaining with the union when the new CEO, Lowell McAdam, pledged to become directly involved. The CWA and IBEW responded by calling off the strike.

At the same time, influential strike supporters called a halt to the pickets of Verizon Wireless stores. As former CWA organizer and author Steve Early wrote on the Labor Notes Web site:

For reasons that remain murky at the moment, CWA and IBEW coupled their strike suspension over the weekend with a very ill-advised curtailment of [Verizon Wireless]-related activity by labor and community allies. Many local groups had already "adopted" a local retail outlet for their continuing attention.

The back-to-work agreement negotiated with Verizon only suspends striker picketing at these locations, as of Saturday [August 20]; but the message immediately conveyed to Jobs with Justice activists and other union members was "that support activities should now end," as UNITE HERE president John Wilhelm put it in a "stand-down" message Saturday night. JwJ Director Sarita Gupta reinforced this impression further by announcing that "all leafleting at stores, work sites and other events" must "cease," when, in fact, none of that is barred by the back-to-work agreement.

Despite the promise of a fresh start, however, the company has kept nearly all of its harshest demands on the table. Among them are forcing workers to pay for 25 percent of health care premiums--up from zero--along with restrictions on overtime, sick days and job security.

If Verizon believes it can obtain these concessions, it's because unions now only represent 30 percent of workers at the company--the Verizon Wireless business and other nonunion operations have grown, while traditional copper landline services, which remain union, decline.

IF VERIZON is still out to crush the CWA and IBEW, why did the unions send their members back to work just as a promising solidarity campaign was taking off?

After all, CWA President Cohen made it clear to the New York Times that the back-to-work agreement was not a victory. "Everybody knew we faced a long list of management demands, and that's why there was a strike, and we would go back into bargaining when the talks could be meaningful," he said. "We don't consider this a victory in any way. We consider it progress toward a good process at Verizon."

According to notes from an open conference call with Verizon shop stewards, Cohen said that the fight for a good contract would continue. He even described the support the strike received as evidence of a new democracy movement in the U.S., referring to the Wisconsin labor protests in defense of public-sector workers' collective bargaining rights. He put the Verizon struggle in the context of the revolutions in Egypt and Tunisia.

Yet by comparing the Verizon fight to these bold struggles, Cohen only highlighted the defensiveness of the unions' strategy.

There are several reasons for the cautious approach of a limited strike. One is the fact that the IBEW has no strike fund. In past strikes at Verizon and its predecessor companies, the IBEW had to lean on the CWA financially. Advocates of a limited strike also point to the fact that technological changes make it easier for the company to ride out a long strike of landline workers. According to this argument, it's better to have a short strike that can disrupt operations without entering into a costly war of attrition.

However, what union leaders seemingly failed to consider was how the activism and popularity of the strike had the potential to overcome those obstacles.

By making Verizon a national focus for labor, financial support for the strike could have been raised throughout the labor movement. And continued solidarity pickets at Verizon Wireless stores would have hurt the company in the highly competitive cell phone business.

But if CWA leaders recognized those possibilities, they were unable or unwilling to take advantage of them.

Moreover, CWA leaders had already made it clear to Verizon that they were prepared to accept major concessions, such as those agreed to in the 2009 contracts covering about 100,000 AT&T workers. Those deals include an end to pensions for new hires in some regions and a requirement that workers pay a share of health insurance premiums for the first time.

At the CWA convention earlier this year, former Verizon worker and CWA Local 1400 President Don Trementozzi made an unsuccessful but strong run for the No. 2 spot in the union in a campaign that highlighted the concessions at AT&T and criticized the union for failing to mobilize for the Verizon contract early enough. This put pressure on Cohen to take a tougher stance in negotiations.

In addition, Verizon's demands went far beyond the concessions that the CWA accepted at AT&T. The union had no choice but to call a strike, ready or not.

Rather than seize the moment and make the Verizon strike a focus for working people fed up with Corporate America's job-killing and wage-cutting attacks, the unions shied away from championing their members' good pensions and health care benefits--focusing instead on collective bargaining rights, which are not in question.

Apparently, CWA and IBEW leaders don't believe that the union can make a forthright public defense of the gains its members have won over the decades, whether it's a defined-benefit pension or employer-paid health care premiums--workers do have to pay co-pays and other expenses. Instead of fighting on the basis that all workers should have good wages and benefits, the CWA and IBEW talk vaguely and ineffectively about "defending the middle class."

Now, with the focus of the struggle shifting to the workplace, Verizon workers will still need support. Dozens of workers already face disciplinary action, including termination, for alleged infractions on the picket line. Others will face threats of discipline as well if they, for example, refuse mandatory overtime.

While these fights won't have the high profile of a strike, they are crucial to renewing and rebuilding the union's muscle for what could be a long fight for a contract. And the more organized and educated the rank and file becomes, the greater the pressure on union leaders to stand firm against the company during this contract fight and beyond.

It's important to try and link such grassroots efforts from city to city to maximize the pressure on the company. A popular Facebook page used by rank-and-file workers to exchange information on picketing and organizing and to debate strategy will likely continue to be an important organizing tool. E-mail lists, newsletters and websites will also play a role in consolidating the networks that emerged at workplace pickets and at Verizon Wireless store actions.

So while CWA and IBEW leaders may have cut short a promising strike, the struggle against concessions continues. It's important for union members and supporters everywhere to do what they can to support it.