Organizing an “inside strike”

When faced with an expired or extended contract, but told by union leaders that striking isn't an option, rank-and-file union activists have to find a way to keep up the pressure on management to meet workers' demands.

Gregg Shotwell, a retired 29-year veteran of General Motors and Delphi and a United Auto Workers activist, is the author of the forthcoming Autoworkers Under the Gun: Live Bait & Ammo, a collection of shop-floor newsletters he produced while at GM and Delphi. Here, he explains how workers can flex their muscles even when striking isn't an option.

WORKING TO Rule (WTR), or The Inside Strike (TIS), is the most fun I ever had at work. It satisfied all my desires to make the bosses pay for mistreating workers. I loved taking the rules the bosses devised and shoving them down their throats. It's fun, it's easy, and it's simple. TIS.

Knowledge is power, and workers can wield it with a hilarious vengeance.

That's really all you have to do. Just shrug and say, "I don't know." That's why it's called The Inside Strike. Instead of withholding labor, workers withhold knowledge, and collect a paycheck just like the burdensome boss.

BOSSES LIKE to boss, so if you want to work to rule happily, do the bosses a favor and give them lots of bossing to do. The boss will like you for it, and everyone will be happy, keeping labor costs down by outsourcing all decisions to the boss. 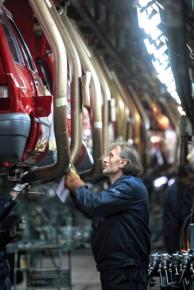 What the hell--they're the knowledge workers, not us. We just follow orders, nothing more, nothing less. If you do what the boss says, you can't get in trouble, but rest assured, it will be something stupid. Don't question it, just do it. For example, if the boss says, "We need parts really bad," give him what he asked for--"really bad" parts.

I'm joking. The customer is more important than the numbers. We don't want one of our brothers or sisters who buys one of our company's products...Oh, that's right, no one in our families will ever buy the corporate mugger's products again...Well, we don't want to hurt any poor schmuck who is foolish enough to buy from a socially deviant company. So maintain quality at all costs.

And the best way to assure that quality decisions are made at every turn is to kick every decision upstairs, where the highest-paid knowledge worker can make the very best decision.

Is this the right O-ring? I dunno. Better ask the dude in the suit and tie.

Furthermore, remind fellow union members--wherever your products or services may be delivered--to inspect all components carefully, and if they find any defects, send them back.

Never forget, we want to "exceed our customers' expectations." Which reminds me. Make sure all your friends and families who are customers, or potential customers, call in with complaints or inquiries and hold the line. I'm serious. Put the company on hold. How often have companies devoured your personal time as if it was worthless? First, make sure you get a manager on the line and then ask, "Can I put you on hold?" Then, instead of playing muzak, flush the toilet.

Working To Rule is fun. And why not refuse voluntary overtime, knowing full well that the company will have to make up for it? The overtime you work today will extend the picket line you walk tomorrow, so postpone it. The overtime you turn down will have to be made up later after you get a raise. Which leads us to the next issue: work for profit, not for loss.

We must look at the proposition like reasonable businessmen. If we can't raise the price of our product, which is our labor, the only way we can make a profit is by reducing our cost. What is our cost? Our cost is the effort we put into our labor. So work smart. The less effort one expends, the higher the profit margin.

We should all follow the capitalist ethic and reduce the cost of the product we sell in order to be more profitable. What capitalist can argue with that? We are on the same page of the same hymnbook when we reduce costs in order to increase profits for ourselves. The less you give, the more you make. Isn't that a sound business practice?

One of my favorite WTR stories is about the millwright whose job description required him to inspect ladders for safety. I'll be damned if he didn't find a broken weld on every single ladder in the shop. He red-tagged every ladder and took them out of commission.

The next day when he came to work, he discovered that management had put all the ladders back into service without repairing them. So this time, he not only red tagged the ladders, he chained them up and padlocked them. The next day, management wanted to write him up, but they couldn't. He didn't break the rules, they did. He followed their rules to the letter.

Working to rule is the best of pranks. One of my pals used to enjoy pulling a fire alarm every time a supervisor picked up a tool. His coworkers didn't hesitate to act safely and evacuate the plant.

THE BEST approach is the simplest. Get the bosses to hold up production.

One of my tasks as a machine operator was to gauge certain dimensions of the fuel injectors we assembled. One day, I saw some measurements that were drastically out of spec. I notified my job setter, who in turn notified an engineer. Then a supervisor with extensive experience as an auditor intervened.

Before long, two more engineers applied their collegiate wizardry. The B-shift administrator threw his weight onto the equation. Then another supervisor bellied up to the bar to add his expertise to the mix. We set the benchmark for participation.

We examined the parts and checked the gauge, again and again. The positive side of all this strutting and fretting is that for once, we were a unified team, showing more concern for quality than production counts. Despite the dearth of common sense, that must signify something.

Then Brother Mahoney (who didn't know the drill) strolled by, and we asked him to look at it. His mind was clear as a blackboard in July. He checked two parts on the gauge and said, "There's nothing wrong with these parts."

The lights came on. The depth and breadth of my stupidity was astonishing. I felt like the pied piper of scrap. I had read the gauge wrong. A decimal place can mean the difference between a home run and a bunt. If you're not a baseball fan, try it on your paycheck, you'll see what I mean.

The point is: I misled a whole group of experts. I told them what to see, and they saw it. They knew better, they were experienced, but the power of suggestion channeled their perception like blinders. If Pat Mahoney hadn't happened by, we might still be spelunking in the murky caverns of Shotwell's mathematically challenged brain, waylaid by a decimal place.

The point of The Inside Strike is to reduce production by following every rule, every safety precaution, and every quality procedure to the letter. And always withhold knowledge. Smile and say, "Now what, boss? What should I do next?"

The less you do, the better. When the wolf comes for your lunch, you don't have to unwrap it for him, heat it up, put it in a clean bowl and spoon-feed him. If you feed the wolf, he will be back for more tomorrow and every day thereafter. Don't feed the wolf. Point him down a bunny trail.

It's fun and easy.