General Motors and the United Auto Worker (UAW) announced a tentative contract agreement September 17 that contains a signing bonus instead of a raise for long-term workers and leaves lower-paid new hires at substandard wages.

The UAW had vowed to close the wage gap between top- and second-tier workers, who make just half the top union wage of around $28. But the difference won't be narrowed much under the new deal--and if new hires gain ground at all, it's because higher-paid workers don't get any base pay increase, but rather a lump-sum signing bonus. Plus, workers are still waiting for the fine print on the contract, which may contain still more concessions.

Gregg Shotwell, a retired 29-year veteran of General Motors and Delphi and a UAW activist, is the author of the forthcoming Autoworkers Under the Gun: Live Bait & Ammo from Haymarket Books, a collection of shop-floor newsletters he produced while at GM and Delphi.

A $5000 signing bonus is less than $25 per week over a four-year contract. Can't even fill up the tank on my 4-cylinder, and that's before taxes and UAW dues are deducted.

This is hardly the type of negotiating that would impress my non-union friends at Honda, where the profit-sharing plan is already a well-known scam. They call it the "Profit-screwing plan."

Second-tier workers looking at three bucks tops over four years can count on 75 cents a year. Ouch. Not the big boost workers expected. "Felt more like dropping a fifty pound air gun on my toe than a reward for working hard and keeping my mouth shut," said one source close to the talk on the shop floor, who "didn't want to be identified because details of the contract have not been released to union members." 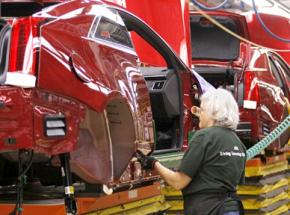 UAW officials have kept this contract under tighter wraps than any contract I remember. Apparently, they have very little to brag about. But I am more concerned with what they aren't telling us than what they are publicizing through unidentified sources--aka, bartenders, cab drivers and escorts.

Health care is always an easy target for takeaways which may be concealed in convoluted language or introduced next January as in, "Oh, by the way..." Or, like they say on the shop floor, "We won't know what's in the contract until next year when they reopen it and change it."

Perhaps I am too skeptical, but every time I think we are nearing the bottom...another trap door opens.

GM NEEDS to replace legacy workers with new hires in order to gain any benefit from the second-tier wage. Without a carrot and a stick, workers aren't ready to jump ship in a tanking economy.

A lot of workers are assisting unemployed family members, or they are underwater on their mortgage, or they simply feel insecure since they last checked the balance in their 401(k). So where's the shake and bake? Where's the clue to GM's turnaround plan? Why isn't Wall Street doing handstands like they did in 2007? Is the silence a tell or an omen?

UAW President Bob King said he held the line on pensions. By which he could mean that he helped reel in the suckers who took the bait, or that he stopped the offense from making any gains. Perhaps I have grown too cynical in my old age, but there's something suspicious about a deal that doesn't address an urgent financial issue like pensions.

In June, GM reported that its pension system was underfunded by $10.8 billion. GM Vice President Stephen Girsky, who is also a UAW-VEBA (Voluntary Employee Beneficiary Association) trustee (that's right, he negotiates with himself, which is why he doesn't experience any conflicts of interest) told investors, "We want to take the pension risk off the table."

Investors are concerned that GM's pension is so far underfunded that it looks like sunken treasure.

This is not intended as a metaphor. It really is treasure in the eyes of investors, who recognize that when a debt is taken off the books, it turns into a credit. Easy money, if you have the right tackle and a captain with a patch over one eye. Ellen E. Schultz, in her book Retirement Heist: How Companies Plunder and Profit from the Nest Eggs of American Workers, explains:

Because the benefits are recorded as debts on a company's books, reducing the debt generates paper gains, which are added to operating income, right along with income from selling hardware or trucks.

Thanks to these accounting rules, which all companies adopted in the late 1980s, retiree plans have become cookie jars of potential earnings enhancements: Essentially every dollar owed to current and future retirees--for pensions, health care, dental, death benefits or disability--is a potential dollar of income to a company.

GM can't take pension risk "off the table" without (1) revisiting bankruptcy court, a common practice, but probably not a good option for GM; or (2) switching to a cash balance plan and/or buying out future retirees; or (3) shoveling $10 billion cash overboard to fill the sunken treasure chest (okay, now it is a pirate metaphor), which would plunge GM stock and the UAW-VEBA with it.

So what's it going to be? If I am way off base, I wish someone would do the math for me and put a sock in Girsky's mouth, because the Social Security Age Creep is stalking my sleep.