Alex Schmaus reports on the first day of Occupy Cal protests last week at UC Berkeley--and plans to step up the struggle with a student strike this week.

CALIFORNIA'S UNIVERSITY students, faculty and staff are looking ahead to a student strike and day of action on November 15 after an Occupy Cal General Assembly at the University of California (UC) Berkeley ended a day of protests and confrontations with police November 9 with an overwhelming vote--569 to 31--to make the call.

"We will strike in opposition to the cuts to public education, university privatization and the indebting of our generation," reads the call for a day of action "in all sectors of higher education."

The GA meeting at Berkeley came after the first day of protests in a week of planned demonstrations to "ReFund Public Education"--called against a 200 percent increase in tuition at state colleges and universities since 2008, on top of massive cutbacks to public education as a whole.

The UC system, once the pride of the state, is going through a process of de facto privatization. Last year, it passed a milestone of collecting more money in student fees than in funding from the state of California. And now UC President Mark Yudof is talking about a further 81 percent fee increase for undergraduates. 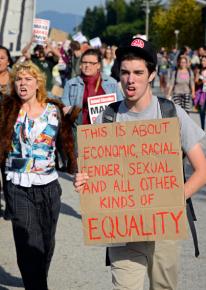 The combination of fee hikes and budget cuts have spurred protests across California during the last two school years, including a March 4 day of action in 2010 that linked the struggle at the state's universities with protests in the K-12 system--and which inspired protests to defend public education around the country.

Now, the November 15 day of action will itself build for the final actions in the week of protests on November 16--demonstrations outside meetings of UC's Board of Regents at UC San Francisco-Mission Bay and of the California State University (CSU) Board of Trustees meeting at CSU Long Beach.

THE PROTESTS at Berkeley on November 9 captured national attention when police attacked an attempt by students to set up an Occupy encampment on campus. A total of 39 people, both students and faculty, were arrested.

But there were protests the same day across the state. More than 1,000 rallied at UC Santa Cruz and UC Irvine, among other campuses. At UC Los Angeles, demonstrators shut down the intersection of Wilshire and Westwood Boulevards. Police moved in and arrested 11 students.

In Berkeley, the day of action got off to a spirited start when 3,000 students rallied on campus at noon to demonstrate support for the Occupy movement. Many marched afterwards to the nearby Telegraph Avenue branch of Bank of America, prompting its closure for the day.

The students were no doubt energized by the general strike and day of action called by neighboring Occupy Oakland for the week before, on November 2.

"I've seen many protests and mobilizations, but nothing I've witnessed has compared to what I saw at the Oakland general strike," said Suzy Babb, an undergraduate student at UC Berkeley. "It made me realize the full impact of the Occupy Movement and its ability to reach across diverse sectors of the working class. The Occupy movement has reinvigorated the movement at Berkeley. Students who have never been active are now inspired to recreate what's happening in Oakland on our own campus."

Oakland's general strike had the same effect on tens of thousands of people from around the Bay Area who stayed away from work or school and demonstrated on November 2. During the high point of the day, some 15,000 people marched on the Port of Oakland where International Longshore and Warehouse Union members honored mass community picket lines and shut down the port.

One week later, the Berkeley protests had an air of confidence. After the Bank of America picket, hundreds of students marched back to the Berkeley campus to begin establishing the Occupy Cal protest encampment in Sproul Plaza. Three tents were pitched on the grass directly in front of Sproul Hall.

Most of those present were expecting a conflict with campus police since a message from campus administration detailing its "no encampments" policy had been sent out earlier in the week.

Campus police issued a dispersal order to the crowd at 3:30 p.m., but about 200 students showed their determination to stand their ground by linking arms and forming a human barricade around the tents. Video of the standoff was viewed by tens of thousands on YouTube.

Students were unable to protect the tents when dozens of police in riot gear and wielding long wooden clubs broke through the human barricade and confiscated the tents within a few minutes. Six students and one faculty member were arrested, and many were injured during the clash. "[They] had their rods and just [made jabbing motions]," said Berkeley student Ashley Pinkerton. "They were just beating us."

Occupy Cal supporters refused to disperse in the face of this violence. Organizers asked protesters to "text your friends to get down here"--and as the sun began to set and darkness fell on the campus, the crowd swelled by several hundred.

By 9:30 p.m., close to 100 riot police were deployed around the plaza, several new tents had been pitched, and 600 supporters were assembled around them. Police moved in for a second time to attack the assembled students and confiscate the new tents.

The clash between police and protesters linking arms in a human barricade was repeated, this time with more police, more beatings and more arrests. Once police broke through the human barricade and confiscated the tents, however, they retreated to the top of the steps approaching Sproul Hall in the face of near universal determination on the part of those present to hold their ground in the plaza below.

Robert Slaughter, a political science major at nearby Saint Mary's College, was one of those arrested during this second clash with the police. Slaughter, who is Black, was subjected to what appears to be a clear case of racial profiling. After being thrown to the ground and beaten by police in the process of arrest, he was separated from the rest of the protesters in county jail and held longer than anyone else.

After being bailed out by the UNITE HERE hotel workers union on Friday afternoon, Slaughter, who had never been arrested before, recounted how Alameda County Sheriff's deputies had harassed him. "They yelled at me, 'What gang are you in?' and 'Where are your tatoos?'" he said.

Slaughter has been issued an order to stay away from the Berkeley campus, but he plans to hold the UC administration to account by speaking at a rally just off campus during the upcoming student strike on November 15.

AFTER THE second clash between students and police, the authorities continually gave unlawful assembly dispersal orders, but cops were frustrated in their attempts to end the protest. The crowd continued to grow, peaking at close to 1,500 when supporters from Occupy Oakland and Occupy San Francisco arrived at midnight.

At this point, the massive crowd sat down and began a General Assembly-style discussion. Tension eased, and the mood became much lighter, even jubilant. The assembly cheered, comically, when somebody began blowing soap bubbles in the air over them.

The "people's mic" technique developed by Occupy Wall Street--where activists repeat the words of speakers in waves so that they can be heard in large crowds--was used to communicate. The assembly was so large that speakers had to wait for the crowd to repeat their words three times, sending their message to larger numbers on the edge of the assembly.

Activists discussed next steps, and then a vote took place around 1 a.m. under the star-filled sky. The November 15 date won support as a strike day in order to build momentum for the planned mass protests against the UC Board of Regents and CSU Board of Trustees.

Those demonstrations are being organized by the ReFund California Coalition, a labor-community alliance dedicated to making the banks pay for public education in California. ReFund California is organizing buses to bring students from all over the state to the two convergence points in San Francisco and Long Beach.

Last November, a group of 300 UC students attempted to shut down a UC Regents meeting at the very same campus in San Francisco and were foiled by a very aggressive police response, including one officer who recklessly pointed a live handgun at unarmed student protesters.

This year, the demonstrations are expected to be much larger. The potential to disrupt and shut down the Regents is very real.

Winter is approaching fast, and this poses a serious challenge to the Occupy encampments in colder parts of the country. The reemergence of the campus struggle on the West Coast, therefore, is an extremely positive development.

The first signs of a hot winter in California will be an all-out mobilization for the student strike on November 15 and the demonstrations on November 16.

A previous version of this article appeared in the CCSF Guardsman.