He’s concerned about our health?

Kyle Brown, who works in an HIV and mental health clinic in New York City, wonders when the mayor started caring about public health and safety.

Without warning, hundreds of "New York's finest," clad in riot gear and armed with clubs, pepper spray, and tear gas, raided the encampment in the early morning hours and razed it to the ground. Subway lines were shut down, streets were barricaded, and supporters were bloodied to prevent any resistance. Journalists were systematically denied access to report on the crackdown.

Later in the morning, Bloomberg openly ignored an unfavorable injunction issued by a judge in order to continue the new police occupation of Zuccotti Park. And the NYPD followed Bloomberg's orders, showing when faced with a choice, the police are more concerned with defending the mayor and the 1 percent than upholding an order of the court.

How did Bloomberg justify this crackdown on our rights to free speech, to peacefully assemble and to a free press--not to mention shutting down the Metropolitan Transportation Authority (MTA), for which we pay outrageous and ever-increasing fares? 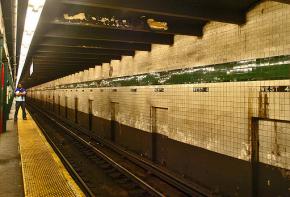 According to Bloomberg's statement: "From the beginning, I have said the city had two principal goals: guaranteeing public health and safety and guaranteeing the protesters' First Amendment rights. But when those two goals clash, the health and safety of the public and our first responders must be the priority."

The "petri dish" approach to dealing with Occupy Wall Street was predictable. After all, this was the lead given by the New York Times, the New York Post and other media outlets over the course of November.

But it will be difficult for anyone who has set foot in New York City over the past couple years to take Bloomberg's newfound "commitment" to public health, safety and cleanliness very seriously.

For those who haven't been to New York City, here are a couple contradictions in Bloomberg's reasoning.

START WITH the subway system. Unless you're a part of the 1 percent, you can't get too far in this city without it.

What do people encounter in the subways? Aside from the layer of black muck covering virtually everything and the violently noxious smells, riders will notice plenty of stations leaking from cracks in the ceiling when it rains, creating rivers of garbage water flowing beneath the tracks and puddles on platforms that are sometimes ankle-high. During rush hour, it can become difficult to avoid the drips, so strap-hangers just have to deal with wondering what kind of toxic mixture is sprinkling onto their skin or into their hair.

New Yorkers are used to living in these conditions of generalized filth. But lately, there's a new phenomenon developing: Rats in New York City seem to be getting bigger, bolder and more aggressive.

In the subways, rats were once only seen scurrying among the garbage down on the tracks--now, it's not uncommon to be startled by them running around on the platform.

And if that wasn't bad enough, there are more and more stories of rats getting into subway cars and terrorizing passengers who have no way to escape. What sounds unbelievable is documented in plenty of YouTube footage. The most shocking video shows a giant rat climb up the pant leg of a sleeping man on the 4 train, near the Franklin stop in Brooklyn. The man wakes up in horror just as the rat gets right up onto his face.

This newfound boldness is unsettling enough, but what's worse is that rats actually bite about 100 New Yorkers each year, according to the New York City Department of Health.

There are stories of rats biting people on subway platforms when their feet are exposed because they're wearing sandals, but the attacks aren't confined to underground.

For example, the August 8 issue of Metro New York newspaper reported that Jimmy Tallman of Magic Exterminating was called to a Bronx apartment where rats attacked a child. "They were getting into a crib, and they bit on a baby's toes," Tallman told a reporter.

Health workers recommend that anyone bitten by a rat seek immediate medical treatment because bacteria from the rats' teeth can cause a disease known as "rat-bite fever" which can be fatal. Bubonic plague has not been found in a New York rat yet, but two cases of the deadly disease were reported last year by a couple visiting the city from New Mexico.

The recent rat attacks sound like something out of a science fiction movie, but their origin can be easily traced--to the rounds of budget cuts presided over by Bloomberg.

According to an AM New York newspaper report, the city's health department slashed the number of pest control aides by nearly 70 percent as part of Bloomberg's round of budget cuts last year. Additionally, the MTA's 2010 and 2011 budget cuts are eliminating 254 positions for subway car, track and station cleaners.

Trash pickups used to happen "every couple of days," Paul Flores, a 12-year subway station agent, told NBC News. "Now it's four or five days before they pick up the garbage, and the rats just basically call that home."

The threats to New Yorkers' health and safety exist outside the subways.

The city's sanitation system is crumbling as well. According to a New York Times report from November 2009, "essentially every other time it rains," a rising tide of untreated feces and industrial waste rises throughout the sewers and flows directly into Upper New York Bay and Gowanus Canal.

After record rainfalls in New York this summer, it can be assumed that we've been exposed to record amounts of toxic waste.

New Yorkers will remember one of the worst examples of the crisis taking place when water was needed most. On July 22, the hottest day of the year for the city and one of the hottest on record, a fire broke out that closed one of New York's biggest sewage treatment plants, resulting in millions of gallons of untreated sewage being discharged into the Hudson and Harlem Rivers.

There were no advisories about the pollution visible at beaches in Staten Island and Brooklyn. According to the Times, "swimmers, unaware of the warnings, pulled their children from the surf when informed and rinsed them off."

Testing of water samples collected from beaches and piers around New York City has detected the types of bacteria and pollutants tied to sewage overflows. This leads to all sorts of serious health risks--which is why sewage system overflows or treatment plant dumps of waste are often in violation of the Clean Water Act. But few violators are ever punished.

GIVEN THE conditions in which New Yorkers live, it's not surprising that there's a lot of sickness.

But that doesn't mean there are enough hospitals to treat people in New York--or that everyone can afford to be treated if they make it to a hospital.

Since 2000, New York City has closed 17 hospitals. Just last year, Bloomberg presided over the shutdown of St. Vincent's in Greenwich Village and North General Hospital in Harlem, resulting in patients flooding into nearby hospitals that were already operating at capacity.

According to analysis by the United Hospital Fund, almost half of New York's 30 private hospitals are considered financially "at risk" or "in jeopardy," and nearly one-third of these hospitals are operating in the red--foreshadowing more closures to come.

In March of this year, the Department of Health cut free STD testing services for its 10 sites across the city because of budget deficits. New York City is currently the epicenter of HIV/AIDS in the U.S.. One in 77 New Yorkers have been diagnosed with HIV/AIDS, and approximately 20 percent HIV-infected patients in the US aren't aware of their status.

Meanwhile, those who are lucky enough to have health insurance have seen their premiums skyrocket in the past year. But as a result of the jobs crisis, the number of uninsured in New York City has increased for the third year in a row. Young people especially have been hit hard--they are coming out of college with tens of thousands in student loan debt, with poor prospects of finding a job, and they therefore avoid medical fees at any cost.

For many in Occupy Wall Street's Zuccotti Park encampment, therefore, the self-organized medical tent staffed by a team of volunteer doctors, nurses, psychologists and social workers was the best medical attention available to them.

But according to a representative from the Zuccotti medical team, speaking at a recent General Assembly, nearly all of the medical supplies were taken in Bloomberg's November 15 raid, so the team will only be able to treat "life or death" injuries in the future.

Bloomberg is right when he says that there's a public health crisis in New York City--but it certainly wasn't caused by Occupy Wall Street.

If he actually cared to address it, Bloomberg could begin by ensuring that every person in Zuccotti Park--and everyone who lives in New York City--has a top-notch health care plan at least as good as the one he himself has. This shouldn't be too much to ask of someone with a net worth of $19.5 billion.