The struggle to come after Egypt’s election

After five days of mass resistance in Cairo's Tahrir Square and cities around Egypt, the country's military rulers are hoping parliamentary elections on November 28-29 will help them regain the upper hand--by co-opting Islamist and liberal parties and isolating militants.

In reality, the weeklong mobilization--which included two days of protests involving around 1 million people despite the killing of at least 40 demonstrators since November 19--marked a new phase of the revolutionary movement in Egypt. Large numbers of people who greeted the ruling Supreme Council of the Armed Forces (SCAF) as heroes for ousting Mubarak in February now see SCAF as a counterrevolutionary force.

The protests won a series of concessions, including the resignation of an unpopular civilian cabinet that provided a fig leaf for military rule. But as a replacement, the army appointed as prime minister a former Mubarak henchman, Kamel el-Ganzoury.

The military is determined to hold onto power by proposing a new constitution that would put the armed forces above civilian authorities. Despite an estimated 1 million people flooding Tahrir on November 25, the SCAF announced it would hold parliamentary elections November 28 as planned, but extend the voting by another day. Most Islamist, nationalist and liberal political parties agreed to participate, angering many of their members, who felt the elections should be boycotted to protest the military's repression.

Mostafa Ali, a member of Egypt's Revolutionary Socialists and journalist for Ahram Online, spoke with Lee Sustar about the mass protests, the elections and the renewal of Egypt's revolutionary movement.

WHAT WAS the size and political character of the Friday protest on November 25?

The turnout was massive, as expected. The square was really roaring with chants against SCAF and against its head, Field Marshal Mohamed Hussein Tantawi, and there was a general sentiment that the military council must return to the barracks. The consensus in the square was that a presidential council or a salvation cabinet must take power--and that it should be made up of independent people who have absolutely nothing to do with Mubarak and the National Democratic Party that ruled under Mubarak's regime.

The most important thing here is that whatever form such a government would take, it would be accountable to the people, not to the SCAF. 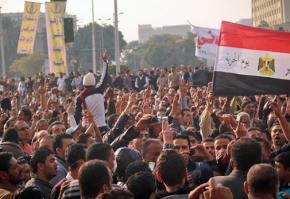 THE MUSLIM Brotherhood, however, remained opposed to the demonstrations.

ARE WORKING-class and economic demands coming to the fore in these demonstrations, or are they focused more on getting the military out of politics?

THE POLITICAL and the economic are completely intertwined. There is a general unifying demand among the million people in Tahrir that the SCAF must go. But the underlying reason is that the economic situation has deteriorated in the last 10 months.

Many people tell reporters that life is getting harder, that unemployment is unbearable, and that the previous government failed to improve their lives. The SCAF has failed miserably on this. So the anger over economic hardship and the yearning for political freedom are connected.

The independent unions had a contingent in the rallies, but it wasn't that big--a few hundred people. They are still in a process of building and have just gone through a number of setbacks. There isn't a working class movement that could have an influence on the mass demonstration on Friday.

HOW WERE the marches from working-class neighborhoods organized?

THESE DEMONSTRATIONS are organized by groups formed to oppose the military trials of civilians, by popular committees to defend the revolution, by the Revolutionary Socialists and hundreds of independent activists mobilizing in their neighborhoods. They march to Tahrir, distributing thousands of leaflets along the way to explain what's going on. It's an attempt to build a local, ongoing presence in the neighborhoods.

IS THE political sentiment in Tahrir ahead of the rest of the country? How will that affect the elections?

YES, THE political sentiment in Tahrir is ahead of the country. You can think of it as the revolutionary vanguard in society among students and workers and youth--but it is much larger than in January. Political consciousness has developed tremendously.

So you have a minority in society--symbolized by Tahrir--which has advanced politically and in terms of its consciousness. And it's ahead of the rest of the country in that sense. Back in January, a majority of people in the country wanted Mubarak to go, so they supported Tahrir. At this moment, that isn't the case regarding the SCAF.

The revolutionary vanguard is much, much larger. Its willingness to fight is unbelievable--it fought five days against the police. But the majority of the workers and poor people have not yet concluded that the SCAF must immediately return to its barracks. Or they don't think we have the power yet to push the SCAF to return the barracks.

On a different level, you can think of it this way: It was much easier for the ruling class to get rid of Mubarak. Getting rid of the SCAF, or pushing it back to the barracks, is a much harder task. Many people outside of Tahrir also want the SCAF to go back to its barracks, but they don't think there is the organization on the ground to win something like that.

HOW WILL all this play out in the parliamentary elections?

THE TURNOUT in elections will likely be quite high. A majority of people believe that elections will be the way to establish a civilian government and to get the army out of political life. There is a majority consensus on this, other than a crazy right-wing minority that wants the SCAF to stay in power.

The majority of the country wants a democratic system. They want a civilian government. They want to be able to vote and to exercise political control over their lives. And they believe this is the way to get the army out of their lives for the first time in 60 years.

So even among people who are fighting in Tahrir and those who support them, some of them will vote, because they don't want to leave the political scene to the SCAF, the Muslim Brotherhood and the Salafists. Yet the majority of the people in Tahrir are more advanced than the rest of the country, and want to actually boycott the election.

So you have a bizarre situation. The fact that people will vote in the elections doesn't mean they want the SCAF to stay. They actually want the SCAF out. They just think that voting will be the quickest way to do it. But the majority of those who support the revolution are not necessarily against Tahrir. There is just not enough organization or confidence to push the SCAF out now.

The SCAF wants this election to gain legitimacy on the ground. The military is very weak right now, and it is determined that the election will take place no matter what. They want to use this to bolster their credentials as people who said they would bring about democracy--they want something to show they've kept their word in order to use that to attack the growing revolutionary vanguard.

That's what the people in Tahrir are saying--that this election will not advance democracy, and it will allow the SCAF to gather the forces of counterrevolution on the ground.

However, it's complicated. The SCAF has just come up with a new prime minister--Kamel el-Ganzoury--a founder of the National Democratic Party and an architect of privatization. Though he was ultimately pushed out by Mubarak, this is someone who is on a no-fly list for leaving the country, because he is implicated in a number of corruption cases in privatization schemes.

Even on that level, people are divided. A majority will go vote, but half the people think that because this man was pushed out by Mubarak, we might want to give him a chance, and the other half are beginning to learn that Tantawi and the SCAF are bringing back the old guard of the NDP, not just the second generation. Ganzoury, who is 77, is an architect of everything Mubarak did over the last 30 years.

By appointing Ganzoury, the SCAF is sending a message that it will not relinquish power. It has said that the new constitution won't change the role of the SCAF by an inch. The SCAF will always have veto power over anything that has to do with the army.

So on the one hand, the military is using the election to bolster its democratic credentials. On the other hand, it is digging in. The members of the SCAF are saying: "We are not going to relinquish power. No constitution, no parliament and no mass movement is going to force us out of power."

Some 25 percent of Egypt's gross domestic product is directly under the control of the SCAF. There was a handmade sign at the protest on Friday listing the crimes of the SCAF. One of them was that its members supported Mubarak for 30 years. Another was that it turned the army into a big business to exploit poor people. Companies owned by the army make macaroni, washing machines, refrigerators and furniture--they build luxury resorts and a lot more. They own a big chunk of agriculture, too, including hundreds of cattle ranches, and they grow all kinds of vegetables and fruit.

That's why pushing the military back into the barracks and having a constitution and parliament to make them accountable is much harder to achieve than making them sacrifice a Mubarak. They have so much more at stake economically and politically.

Then there is the international dimension. The West abandoned Mubarak, but the West will never abandon the SCAF until the very last minute. The U.S. will not abandon the army.

DESPITE THE protests against the SCAF, the Muslim Brotherhood has supported it, despite some tensions over the status of Islam in the proposed constitution. Will that alliance continue?

THE GENERAL feeling in Tahrir is that the SCAF has cut a deal not only with the Brotherhood and the Salafists, but also with the liberals and a section of the left, a coalition called the Revolution Continues. They are going to divide the seats in the new parliament among themselves.

So the Brotherhood opposed the demonstrations in Tahrir, and on Friday, it actually sent many of its members to the square to try to talk people into participating in the elections. They were chased out in many cases. But the Brotherhood is still campaigning.

In the new constitution, the Brotherhood says it will not implement Sharia law. But its version of Sharia is different from the Salafists, who have a very reactionary view--against women and Coptic Christians, and for carrying out the most brutal punishment for poor who break the law. The Muslim Brotherhood's views are a lot closer to their Turkish counterparts. They are for censorship of art and culture, and changes in some educational programs. The Salafists are right wing and anticommunist.