Marx against the state

Throughout his life, Karl Marx argued that for socialism to be realized, the state would have to be done away with. But since his death, many so-called socialists championed building up the state. Lee Sustar shows that this is opposite to Marx's views--and to any notion of socialism. This article was first published in the February 1985 issue of Socialist Worker.

KARL MARX'S politics were formed in the heat of the German workers' uprisings of 1848. The workers' movement, based in the new factories springing up across the countryside, was for Marx the means to turn the slogans of the French revolution--liberty, equality and fraternity--into a political and economic reality for the majority of people.

Large-scale capitalist production brought with it the potential for a society that could conquer scarcity and meet workers' needs--a socialist society.

But after the heady days of 1848, there was a considerable conservative reaction. And by the 1870s, Marx was in political exile in England. The German socialist workers' movement was divided between his followers and those who looked to Ferdinand Lassalle, a former comrade of Marx's.

Lassalle had abandoned the perspective of workers' revolution. Instead he called for a "solution of the social question" through a "free state" in which workers would have the vote, "equal rights" and would limit their labor to a "normal working day." Lassalle looked to "state aid" for the establishment of "producers' cooperatives in such dimensions that the socialist organization of the total labor will arise from them." 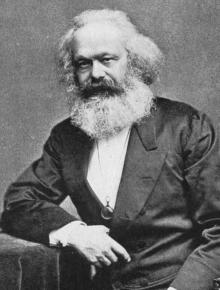 Lassalle reportedly had signed a secret pact with Bismarck, leader of the Prussian landowners, on the basis that the workers' movement and the landlords had a "common interest" against the capitalist class. By the time he was killed in a duel in 1869, Lassalle's theory had taken root among many radical German workers. In 1875, the Lassalleans proposed their slogans as the basis for a unity platform of the German Workers Party conference in the German town of Gotha.

MARX BITTERLY opposed the unification. In his Critique of the Gotha Program, he blasted Lassalle for demanding "nothing beyond the old familiar democratic litany: universal suffrage, direct legislation, people's justice, a people's militia, etc."

Such slogans were progressive in the struggle for bourgeois democrats against the absolutist feudal states. But Marx considered these vague slogans a backward step for the workers' movement, which now had to struggle against the bourgeois state.

Lenin, rereading the Critique while working on his pamphlet State and Revolution, noted that:

In these words, Marx, as it were, foresaw the whole banality of Kautskyism [reformist socialism]: Sweet speeches about all kinds of fine things, turning into the beautifying of reality, because they shade over or leave in the dark the irreconcilability of democracy and monarchy, etc.

But it was the Lassallean concept of the "free state" that most troubled Marx, for behind it lay the question of reform or revolution. Marx wrote that for Lassalle, the state was not a tool by which one class dominates another, but rather was an independent entity that possesses its own moral and free basis. Marx continued:

The question then arises: What transformation will the state undergo in communist society? In other words, what social functions will remain in existence there that are analogous to present state functions?

This question can only be answered scientifically, and one does not get a flea-hop nearer to the problem by a thousand-fold combination of the word "people" with the word "state."

Between capitalist and communist society there lies the period of the revolutionary transformation of the one into the other. Corresponding to this is also a political transition period in which the state can be nothing but the revolutionary dictatorship of the proletariat.

This phrase, the "dictatorship of the proletariat," is, for Marx, a democratic slogan--as it replaces me dictatorship of a tiny ruling class with the rule of the vast majority against the tiny minority. But the transition to a communist society is not automatic. As Marx explained:

This equality of right presupposes inequality, inequality in fact, inequality between people--because one is strong, another is weak and so forth (individuals would not be individuals if they were not unequal), one will receive more than another.

But these defects are inevitable in the first phase of communist society as it is when it has just emerged, after prolonged birth pangs, from capitalist society. Right can never be higher than the economic structure of society and its cultural development thereby determined.

MARX USUALLY refused to speculate on life after the revolution, dismissing that as idle guesswork. But the Gotha Program's vision of an instant utopia provoked him to write that a truly classless society can only develop in the "higher phase of communist society," after labor, "from a mere means of life has itself become the prime necessity of life."

At this point, Marx wrote, the state had "withered away." But this "withering" does not mean abolition of hierarchy after the revolution. Lenin elaborated in State and Revolution:

The more democratic the state, which consists of the armed workers, and which is no longer a state in the proper sense of the word, the more rapidly does the state begins to wither away altogether.

This point was mocked by Stalin and his followers as they established their bureaucratic state capitalist regime in Russia. And since, "socialist states," such as Cuba, Zimbabwe and France have done anything by wither. Rather they have been engaged in strengthening the state--against workers' interests.

Those who dismiss the ideas of the withering away of the state as irrelevant should take a look at the Critique of the Gotha Program and note Lenin's heavy reliance on it for State and Revolution.

While the Critique also hits the Lassallean for its nationalism and other reactionary ideas, it is most useful as a cogent, witty analysis of the state in capitalist society. Above all, the Critique is a call for the working class to smash the state. As Marx reminded a comrade who was also concerned with the Gotha conference: "Every step of a real movement is more important than a dozen programs."