Gary Lapon reports on the frightening reach of a corporate-backed lobbying group.

THE GROUNDSWELL of anger and protest following the murder of Trayvon Martin has forced the discussion of racism onto the center stage of national politics after years when it was consigned to the margins.

One part of that discussion has been the spread--and the consequences--of supposed self-defense laws like Florida's "Stand Your Ground" law, which was the excuse used by police and prosecutors for not charging George Zimmerman with Trayvon's murder for a month and a half.

The questioning of the "Stand Your Ground" law has, in turn, cast a spotlight on the legislative laboratory that produced it--a shadowy, conservative non-profit organization called the American Legislative Exchange Council (ALEC).

Think of a right-wing legislative initiative at any level of government, and there's a chance ALEC had a hand in it. In spite of its innocuous-sounding name, ALEC represents a fusion of corporate money, super-rich reactionaries and right-wing politicians behind the spread of not only "Stand Your Ground"-style laws, but a whole host of other issues. 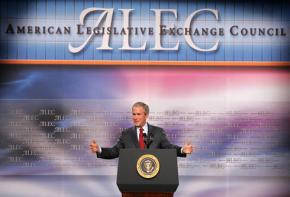 According to the Center for Media and Democracy, the more than 800 model bills and resolutions promoted by ALEC:

reach into almost every area of American life: worker and consumer rights, education, the rights of Americans injured or killed by corporations, taxes, health care, immigration, and the quality of the air we breathe and the water we drink. Only by seeing the depth and breadth and language of the bills can one fully understand the power and sweep of corporate influence behind the scenes on bills affecting the rights and future of every American in every single state.

According to the Center, ALEC's membership includes approximately 2,000 legislators, almost all Republicans, as well as over 300 corporations. The organization is dedicated to promoting model pieces of legislation to serve as templates for bills introduced at the local, state and federal level.

Almost all of the organization's funding comes from corporate sources, but the most notorious funders of all are the billionaire Koch brothers. With their help, ALEC was essential in developing the strategy behind the attack on public-sector unions following the Republicans' 2010 election victory, with Wisconsin Gov. Scott Walker leading the charge.

But as ALEC faces growing scrutiny, we're learning that all this was the tip of the iceberg.

ALEC WAS instrumental in pushing for Florida's "Stand Your Ground" law, which authorizes the use of deadly force by those who "reasonably [believe] that such force is necessary to prevent imminent death or great bodily harm." Those who use deadly force in these circumstances don't have a "duty to retreat."

"Stand Your Ground" laws are a particularly extreme version of the "Castle doctrine," which is on the books in various forms in most U.S. states. These laws authorize deadly force when confronted with a threat in one's home. But the "Stand Your Ground" law in Florida and other states applies "in any other place where he or she has a right to be."

These facts, as well as similar experiences in other states--like Wisconsin, where an unarmed Black 20-year-old was killed by a white homeowner who won't be charged because of the state's Castle doctrine--have caused many people to wonder whether such laws mean that, in the words of one writer, it's "open season on Black youths."

The racist character of these supposedly "colorblind" laws is highlighted by the case of Marissa Alexander, a 31-year-old Black mother of three who faces up to 20 years in prison in Florida for firing a warning shot into the ceiling of her home in an attempt to ward off her abusive husband. A judge dismissed the "Stand Your Ground" defense in her case.

But not-so-veiled racism is familiar territory for ALEC. The group was a major force behind "voter ID" legislation introduced in a majority of states last year. Sponsored by ALEC's Republican lackeys, the bills would require a photo ID to vote, disproportionately denying the franchise to people of color, the poor and college students, groups more likely to vote for Democrats.

A Democratic Party-backed effort from the Progressive Change Campaign Committee, Color of Change and Credo Action is using public outrage about the Voter ID and Stand Your Ground bills to pressure major corporations and foundations to stop funding ALEC.

As of April 19, a dozen corporations, including Coca-Cola, McDonald's, PepsiCo and Blue Cross Blue Shield, as well as the Bill and Melinda Gates Foundation, have pulled funding for ALEC.

ALEC--WHOSE website banner proclaims "Limited Government, Free Markets, Federalism"--came into being in 1973 as a part of the corporate-backed effort to challenge the gains of civil rights movement, and of the struggles it inspired for economic justice, rights for other oppressed groups, a clean environment and more.

ALEC's founders included Illinois Republican Rep. Henry Hyde, sponsor of the amendment bearing his name that since 1976 has banned federal funding for abortion--the first of many efforts to restrict working class and poor women's access to abortion.

Since then, ALEC has had a hand in some of the most atrocious policy initiatives imaginable, benefitting its super-rich sponsors at the expense of almost everyone and everything else--working people, their unions, people of color, women, the poor and the environment, to name a few.

Before the "Stand Your Ground" push, ALEC played a role in promoting "tough on crime" legislation central to the rise of the modern system of mass incarceration--what author Michelle Alexander has dubbed the "New Jim Crow." This system, with its labeling of Black men as "criminals," provided the context for George Zimmerman to view Trayvon Martin as a threat.

According to Mike Elk and Bob Sloan, writing in the Nation, "ALEC helped pioneer some of the toughest sentencing laws on the books today, like mandatory minimums for nonviolent drug offenders, "three strikes" laws and "truth in sentencing" laws."

As Elk and Sloan point out, having helped engineer the unprecedented growth in the prison population, ALEC helpfully came up with legislation to legalize the use of prison labor in the private sector--at wages as low as 20 cents an hour:

[W]hat ALEC wants to do now is reform the parole system in this country, privatize it. So now prisoners have to put up bond, with private bail bond companies that are owned by big Wall Street firms, where they have to pay outrageous fees in order to get out of prison.

Before the latest scandals, ALEC got unwanted public attention last year during the uprising in Wisconsin against Gov. Scott Walker's union-busting legislation targeting public-sector workers. Walker's candidacy for governor was backed to the hilt by ALEC funders David and Charles Koch, the ultra-right wing billionaires who wanted Walker's Wisconsin used as a laboratory for anti-labor legislation.

As for the environment, ALEC--which has received immense sums from energy companies like ExxonMobil, BP, Texaco and Chevron, and other notorious polluters like Monsanto and Dow Chemical--has pushed a litany of policies to allow corporations to destroy the planet unimpeded by any constraints on profits.

According to the Center for Media and Democracy, ALEC's anti-environmental measures include: blocking limits on pesticide use, making it easier to build nuclear power plants, preventing opposition to genetically modified crops, eliminating zoning regulations, "privatizing water and sewer systems" and "protecting polluting corporations from civil and criminal liability."

And those are just some of the lowlights. ALEC has written and lobbied for a staggering variety of legislation--from cutting taxes on the wealthy, to undermining the government's Medicare and Medicaid health programs, to limiting corporate liability from consumer lawsuits, to busting unions through "right-to-work" legislation, to eliminating minimum wage guarantees, to privatizing anything and everything in the hands of the state.

THE EFFORT to expose ALEC for its many crimes is backed by the Democratic Party, for obvious reasons. As its "Voter ID" initiative shows, ALEC is part of a network of corporate-backed entities that promote the Republican Party at the expense of the Democrats.

But anyone who thinks the Democrats are wholly on the right side about ALEC should look more closely at the link between the two when it comes to the attack on public education. The truth is that the Obama administration's education policy is in line with "reforms" pioneered by ALEC.

Take the Obama administration's Race To The Top funding scheme, which dangles the possibility of additional educational funding in front of state governments, but only if they pass laws allowing the wholesale expansion of charter schools and imposing merit-pay schemes on teachers.

This takes several pages out of the ALEC playbook. As early as 1983, the right-wing group was pushing for policies such as school vouchers, merit pay and "higher standards"--all key components of the now bipartisan attack on public education and teachers' unions.

This likewise explains why the Bill and Melinda Gates Foundation was, until very recently, an ALEC funder. Though Bill Gates likes to drape his efforts to deform public education with the language of the civil rights movement, he, like the Democrats, is a proponent of the same anti-union education "reforms" that ALEC has long supported.

The same areas of agreement between ALEC and the Democrats exist on other issues.

The Democrats opposed efforts by Scott Walker and other Republicans to completely gut public-sector unions, whose get-out-the-vote efforts are critical for Democrats at election time. But leading Democrats--from mayors like Rahm Emanuel in Chicago, to governors like Andrew Cuomo in New York and Jerry Brown in California, to Barack Obama in the White House--are carrying out similar attacks on public-sector workers' jobs, wages and benefits.

Likewise, ALEC and the Republicans weren't alone in causing the growth of the racist system of mass incarceration. The U.S. prison population increased more under Democratic President Bill Clinton than under any other administration--and Barack Obama has continued a war on drugs that has swept millions of Black and Brown men into a lifetime of second-class citizenship.

These areas of overlap shouldn't be that surprising. After all, the same corporations that bankroll ALEC and the Republican Party also fund the Democrats.

For example, AT&T, which sits on ALEC's board, has given millions to both parties in recent election cycles. As for contributions to individual candidates for the 2012 election, only Republican House Speaker John Boehner ($99,200) has gotten more from the telecommunications giant than President Obama ($37,069).

To take another of many examples, Comcast, the corporate co-chair of ALEC in four states, is the 12th-largest overall donor for the 2012 election cycle to this point. Of the $2.35 million it has spent so far, nearly two-thirds has gone to Democrats. The breakdown for ALEC member Microsoft is similar. And the list goes on and on.

ALEC is repellant, but it is not the source of the disease. It is best understood as one component in big business' multi-pronged approach to ensuring its interests are served, no matter which of the two parties, Republican or Democratic, hold office at the local, state or federal levels.

It's a good thing that ALEC's sleazy record is being exposed to the light of day. But no one who wants to see political and social change in this country should rely on the Democrats to counter the right-wing, pro-corporate, anti-worker agenda that ALEC stands for.