The story of the first May Day

Alan Maass explains how the 19th-century struggle of a largely immigrant working class for the eight-hour day came to be honored as International Workers Day.

NOT THAT many years ago, most people in the U.S. probably associated May Day not with workers' struggles, but with the annual parades of soldiers and weapons in Moscow's Red Square, put on by the so-called socialist government in Russia. Nothing better shows how the ideals of socialism were falsified under the dictatorial system in the ex-USSR than the way that the regime transformed May Day into a celebration of missiles and tanks.

In reality, May Day was born as a workers' holiday not to celebrate military power, but to honor the struggle of the U.S. labor movement for the eight-hour day. The effort to win "eight hours for work, eight hours for rest, and eight hours for what we will" became a crusade for labor in the years after the Civil War of 1861-65.

Many people hoped to win shorter hours through reform laws, and by the 1870s, several states and a number of cities had passed eight-hour legislation. But these were routinely ignored by employers, leaving workers with nowhere to turn to get them enforced. 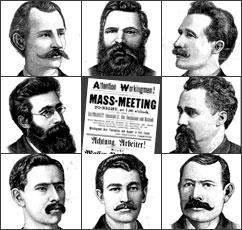 Under the influence of the growing socialist movement in the U.S., labor turned to more militant tactics. "The way to get [the eight-hour day]," Peter McGuire of the Brotherhood of Carpenters and Joiners wrote in 1882, "is by organization...We want an enactment by the workingmen themselves that on a given day, eight hours should constitute a day's work, and they ought to enforce it themselves."

In 1884, McGuire's proposal was adopted by the newly formed Federation of Organized Trades and Labor Unions--the forerunner of the American Federation of Labor--which set May 1, 1886, as the date that "eight hours shall constitute a legal day's labor."

The idea caught on, especially after a successful strike in 1885 against robber baron Jay Gould's railroad empire. Unions and labor assemblies across the country committed to "a massive work stoppage" to begin on May 1.

MAY 1 was a huge success. About 200,000 workers went on strike across the country, and nearly that number won shorter hours just by threatening to strike.

The heart of the eight-hour day movement--and the political center of the left in the U.S.--was Chicago. On the first day of the strike, some 80,000 strikers and supporters--almost one in every six people living in the city at the time--paraded down Michigan Avenue.

Chicago's ruling class had identified the eight-hour movement as a threat. In an editorial naming two anarchist leaders of the struggle, Albert Parsons and August Spies, the Chicago Mail declared: "There are two dangerous ruffians at large in this city; two skulking cowards who are trying to create trouble. One of them is named Parsons; the other is named Spies...Make an example of them if trouble does occur."

The employers knew that "trouble" would occur. They carefully planned to cause it.

On May 3, thousands of lumber workers gathered for an eight-hour-day rally on Chicago's South Side. Nearby stood the McCormick reaper plant--owned by one of the ruling families of the city, and the site of a bitter lockout and strike that had dragged on for months. When scabs from the reaper plant started leaving work while the rally was in progress, several hundred lumber workers broke off to demonstrate against them. Without warning, police opened fire, killing four workers and injuring many more.

Bitterness at the police--already notorious for their brutality in the service of Chicago's wealthy--exploded in demonstrations across the city. One rally was called for the next evening at Haymarket Square.

With rain threatening and other meetings underway elsewhere, the turnout was smaller than expected, and the rally began without incident. Spies spoke as a representative of the city's Central Labor Council and a leading member of the anarchist International Working People's Association. He was joined by Parsons, who had to be called away from another meeting to address the crowd at Haymarket.

When a thunderstorm broke out, most people left the demonstration. Only a few hundred were left when a column of armed police marched to the square. After demanding that the meeting disperse, the cops began advancing on the speakers' stand.

At that point, someone threw a bomb that exploded in front of the police. One officer was killed, and six more later died of wounds--though historian Paul Avrich concluded that most of these fatal injuries were caused by fellow officers opening fire indiscriminately after the blast.

No one knows who threw the bomb. It might have been a worker angry at police violence, or it could have been the act of a provocateur, to provide an excuse for a crackdown--which it did. The city's rulers responded instantly. Newspapers blamed the "Dynamarchists." "There are no good anarchists except dead anarchists," bellowed the St. Louis Globe-Democrat.

Chicago's elite donated more than $100,000 to aid the war on radicals. Police took the opportunity to raid newspaper offices, invade meeting halls and enter the homes of radicals, in order to beat and arrest them. State's Attorney Julius Grinnel issued the order: "Make the raids first, and look up the law afterward."

The authorities finally settled on eight defendants for the Haymarket bombing, each a leader of the city's working-class movement--Spies, Parsons, Samuel Fielden, George Engel, Adolph Fischer, Louis Lingg, Oscar Neebe and Michael Schwab. Most weren't even present at Haymarket on May 4, and those who did attend had either left before the explosion or weren't in a position to have thrown the bomb.

But they were charged with murder, anyway. Judge Joseph Gary dispensed with normal procedures to make sure the jury would be prejudiced against the defendants--one juror was even a relative of a victim of the Haymarket bomb.

The Haymarket defendants were accused because they were radicals. As Grinnel, the prosecutor, said in his closing argument: "These men have been selected, picked out by the grand jury and indicted because they are the leaders. They are no more guilty than those thousands who follow them. Gentlemen of the jury: convict these men, make examples of them, hang them, and you save our institutions, our society."

In short, the Haymarket trial was a deliberate attempt to single out and murder the leaders of the Chicago radical movement.

THE HAYMARKET Eight were found guilty, and all but one sentenced to die. As national attention focused on the trial, sympathy and solidarity for the Haymarket Eight grew, with protests taking place around the country and the world against the injustice of the verdict. Eventually, the governor of Illinois commuted two of the death sentences. But the employers wanted blood. On November 11, 1887, five of Haymarket Eight were killed--one committing suicide in his prison cell, the others hung.

As he was led to his death, August Spies called out: "There will come a time when our silence will be more powerful than the voices you strangle today!"

He was right. At first, the wave of repression halted the struggle for the eight-hour day and pushed unions back on the defensive. But Haymarket became a cornerstone of labor's future struggles. Future revolutionaries like Eugene Debs cited the murder of the Haymarket Martyrs as a turning point in their political development.

This legacy survives to this day--as Spies predicted in his speech to the court after the eight were found guilty:

If you think that by hanging us, you can stamp out the labor movement...the movement from which the downtrodden millions, the millions who toil in want and misery expect salvation--if this is your opinion, then hang us! Here you will tread upon a spark, but there and there, behind you and in front of you, and everywhere, flames blaze up. It is a subterranean fire. You cannot put it out.

First published in the April 27, 2007 issue of Socialist Worker.