Orlando Sepúlveda argues that Chicago Public School aides and other workers should reject a weak contract proposal and stand in solidarity with teachers.

THE BOARDS of Service Employees International Union (SEIU) Local 73 and the Chicago Public Schools (CPS) reached a tentative labor agreement that will face a ratification vote by the local's membership on June 9. Members will be presented with the contract and asked to vote on it, right then and there. The union's leadership is recommending that we approve the contract.

Judging by the capacity of the place where the "ratification meeting and vote"--as the union calls it--is scheduled to be held, union officials expect an attendance of only about 500 members.

These developments are taking place while the city holds contract negotiations with the 30,000 teachers represented by the Chicago Teachers Union (CTU). The SEIU assembly will occur in the same week that teachers have a strike authorization vote. 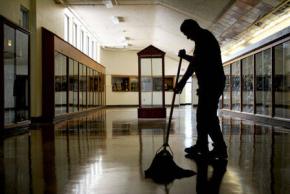 Even without details of the contract, SEIU members in my school are concerned about not voting with the teachers. "If we vote to go at it together, we have the opportunity to get a better contract for all of us," a security officer told me. And on the flip side, some teachers have expressed disappointment and some uncertainty as they consider whether they will have to fight alone.

At my school--I'm a CPS special education aide--we have called Local 73 asking for details, or at least a summary of the contract, in order to be able to talk about it. But we have been told to wait until the assembly, leaving members not much time to sit on the proposal--no time all, actually.

This lack of information has given rise to confusion among my coworkers, both those represented by the SEIU and the CTU. We are forced to speculate, to read between the lines of media reports, or to relay what can be heard through the grapevine.

According to a CTU official with whom I spoke last week, the agreement is a three-year contract that--as the main gain for the union--stops the privatization of the services that SEIU members provide. It also includes a 2 percent salary increase for the first year, and increases members' contributions to their health care insurance.

Media reports confirm some of this. As quoted in the Chicago Sun-Times, SEIU Local 73 Vice President Taalib-Din Ziyad talked about a "'reasonable wage increase' and an assurance that no more union jobs would be outsourced," adding that the deal also "keeps health care costs down and maintains fair discipline language."

The paper also points out that "nothing in the agreement specifically makes up for scheduled wage hikes that were frozen by CPS in the last year for all its unions."

ASSUMING THAT all these contract details are true, I will vote "No" when I attend the assembly this Saturday.

The union leadership will probably argue that, with the country still feeling the effects of the economic crunch and with budgetary and public debt crises, a 2 percent increase is "reasonable." Add a freeze in the privatization of our jobs, and some will take it, like the security guard above. "It's not good," he said, "but having job security is a good feeling."

This concession by CPS alone is the biggest victory that SEIU Local 73 has to show, and not only because of the job security it offers us. Public education is under attack, and any setback to privatization is a step forward in its defense. But in the more general context of fighting back against the bipartisan austerity measures being imposed on workers overall--and in the context of the labor struggles going on right now in Chicago--this is a hollow victory.

The defense of public education--meaning not only halting privatization, but also the improvement of all its constituent elements--will require the unity of all the community that it serves and all the workers involved in it.

Getting decently paid workers teaching, or assisting in the teaching, of our children is a good thing. But that can only be achieved by uniting our forces, not dividing them.

Local 73 thinks it got a good deal by using the pressure created by the teachers' negotiations to get us job security--but just for the next three years. But as has been pointed out by my SEIU colleagues at my school, we could have gotten that and more if we had stood by the teachers.

This so-called smart move by our union ultimately weakens us all. Still, as a CTU staffer told me: "This defection, while calculated to confuse, doesn't affect the fact that a united CTU can defeat the board."

A 2 percent increase, even in these hard times, is not a victory--much less when it is accompanied by an increase in our health care costs. By portraying this pay gain as "reasonable," we are giving in to the idea that we all need to "tighten our belts."

Austerity only affects the living standards of the working class. Companies have restored the profit levels they achieved before the crisis, and yet they continue to be subsidized by public money through bank bailouts and tax breaks.

These poor labor contracts are not a matter of lack of money, but a question of priorities. A united fight by public employees in the Chicago schools against the logic of "Robin Hood in reverse" has the potential to ignite resistance to austerity across the country. In the context of this broader fight, the SEIU Local 73 leadership has missed the opportunity to take up the struggle against the 1 percent.

As the teachers prepare to authorize the CTU to strike if necessary--a strike that will have implications not only for a contract, but for the future of public education and turning the tide against austerity--our local should work side by side with the teachers for a better future for all workers, and not shy away from the fight for a small treat.