They care about abortion...every four years

The Democrats think they can count on the votes of women and men who support the right to choose--so they take no action to meet their demands.

"MITT ROMNEY would definitely drag us back."

The Obama campaign's ads to mobilize women voters were out last week in swing states for the 2012 election, and the message was hardly a new one. The Democrats, the argument goes, are the only thing standing in the way of Republicans decimating women's reproductive rights--so you better vote for Obama.

The problem with that reasoning, of course, is that the decimation of the right to choose has been ongoing--including during the last four years when Barack Obama occupied the White House, and the last six years when Democrats had majorities in Congress for much of the time. But the party that claims to be for women's rights didn't do anything to advance those rights and make up for lost ground when they had the chance.

At best, the Democrats opposed the most extreme anti-abortion measures the right came up with. At worst, they gave up more ideological ground to the right--and actually promoted less extreme restrictions--but restrictions nonetheless--on the right to choose as the "realistic" option. 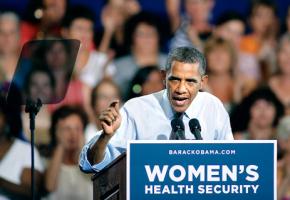 The Democrats don't feel obliged to say what they will do for women, because the Republicans have already talked so much about what they will do against them--and that's all mainstream women's rights organizations seem to care about. When it comes to reproductive rights, there's no "politics of hope"--it's more like the fear factor.

It's time for supporters of women's rights to say enough. Enough empty rhetoric, enough broken promises, enough fear-mongering, enough of Democratic politicians and the liberal women's fundraising organizations that support them compromising away our right to choose.

The Democrats aren't stopping women's rights from being taken away. In fact, they've played a role in making those attacks possible--with their eager compromises with the right that have shifted the entire debate about abortion further and further to the right. By using reproductive rights as a bargaining chip--and a political sound bite to raise only when election-time comes around--they've demonstrated how little they care about these issues as a fundamental part of their platform.

AT A Denver campaign stop last week, Obama was introduced by Sandra Fluke, the woman who tried to testify in Congress about why she needed health insurance that covered birth control--something required by the Obama health care law. Fluke was turned away, and instead made her moving speech via YouTube. She was promptly attacked by Rush Limbaugh, who called her a "slut." According to Limbaugh, Fluke wanted birth control covered so she could have lots of sex like a "prostitute."

For people who know how important it is for women to be able to obtain birth control--something that 99 percent of women who are sexually active with men use at some point in their lifetimes--the sexist attack on Fluke was a lightning rod, inspiring protests against Republicans who want to return to the bad old days of the 1950s.

But for the Obama administration, the decision to highlight Fluke's case and the issue of birth control was a political calculation--one that's limited to a campaign photo op.

Almost as soon as Obama said he supported requiring insurers to cover birth control for women, he also said he was willing to consider an exemption for all institutions associated with the Catholic Church, including universities, hospitals and charities.

In other words, discriminating against women by denying them health coverage mandated by law is okay if you're a Catholic business.

Obama eventually came up with a compromise on the issue, but it didn't satisfy the U.S. Conference of Catholic Bishops, which is filing a lawsuit against the policy, coordinated with dozens of other religious organizations--which are perhaps emboldened by how quickly they got Obama to consider an exemption.

Besides, the fact that the Obama administration says it supports birth control shouldn't really be a huge deal. The "debate" about the importance of birth control ended decades ago. The result: Women need it, period. This once-settled issue is only back because of the utterly backward character of the right's assault on women's reproductive rights.

Ultimately, this is advantageous for Democrats. They can pose as protectors of women's rights by sticking up for something as non-controversial with most people as birth control--while ignoring more difficult battles, like federal funding to cover abortions, that ought to be fought to make reproductive health care accessible to all women.

On the contrary, the Democrats ran away from that debate. During negotiations with conservative Democrats about the Affordable Care Act in 2010, Obama promised to issue an executive order applying the restrictions of the Hyde Amendment--which bars federal funding to poor women seeking abortions--to the health care law.

In other words, Obama, who said when he was running for president that he would work to overturn the Hyde Amendment, used abortion funding for poor women as a bargaining chip to get his bill past anti-abortion Democrats.

At the time, the Democratic Party wasn't just in charge of the White House but the majority in both houses of Congress. You'd think it would be a good time to take some steps to guarantee access to abortion for all women. But the Democrats demanded less--and got it.

THIS SELLOUT on abortion in the health care law is in keeping with the Democrats approach to women's dwindling abortion rights generally--a lot of talk, at least around election-time, and no action.

In state after state, access to abortion is under assault. In just the first half of 2012, state governments have enacted 95 new provisions related to reproductive health and rights. According to the Guttmacher Institute, the following measures passed in this six-month period:

Three states have limited access to medication abortion, bringing to eight the number of states restricting access to the treatment.

Three states enacted unconstitutional measures that ban abortion prior to fetal viability, either at 18 or 20 weeks post-fertilization (the equivalent of 20 or 22 weeks after the woman's last menstrual period)--bringing the number of states that have barred abortion at this early point in pregnancy to nine.

Two states adopted measures requiring that a woman listen to the fetal heartbeat before she can obtain an abortion. Louisiana's heartbeat requirement necessitates performing a transvaginal ultrasound for abortions performed in the first eight weeks.

Two states adopted measures requiting that women get counseling on the negative mental health effects of abortion, even though there is no medical basis for this claim. This makes nine states that require such counseling.

Several states implemented waiting periods before women could get an abortion, bringing the total number with this restriction to 26. In April, Utah became the first state to impose a 72-hour waiting period on women before they can terminate a pregnancy.

Four states limited coverage of abortion in the health exchanges that will be established as part of the Affordable Care Act, bringing the number of states doing so to 20.

According to Guttmacher, 55 percent of U.S. women of reproductive age now live in one of the 26 states considered hostile to abortion rights.

Democratic politicians may voice concern about the worst offenses of the right wing, but they've looked the other way as states pass restriction after restriction on the right to choose. Instead, the approach of "finding common ground" with abortion opponents has meant that women's reproductive rights are being compromised away.

Men and women who support a woman's right to abortion--and fundamentally, her right to make her own decisions about her body--shouldn't be forced to compromise about what they want just because there's an election campaign taking place. These are choices that deeply affect the lives of women and their ability to be equal human beings in society. They must be considered with the seriousness they deserve.

Anti-abortion Republican politicians are attempting to take away all women's right to decide with bills about "fetal pain," "personhood," mandatory ultrasound and counseling. According to them, women need to be told what to do because they can't possibly make decisions for themselves.

Why would Democratic Party politicians ever want to find "common ground" with these people?

The Democrats would rather woo voters who support restrictions on abortion than make the effort to meet the demands of pro-choice women. Why? Because they know these women will vote for them anyway, because they haven't been given any other alternative.

In boardrooms of liberal women's groups like the National Organization for Women and NARAL Pro-Choice America, they're already vowing to pull out all the stops to re-elect Barack Obama, no matter what--and expecting absolutely nothing in return. Fear of what a Romney White House might look like might be enough for these groups, but it shouldn't be for those of us who think women deserve better.

Mitt Romney, Paul Ryan and the other Republican opponents of women's right to choose are indeed scary, and they have women's reproductive rights in their sights. But the Democrats clearly aren't up to the job of stopping them. That will depend on what we do.