Lance Selfa, author of The Democrats: A Critical History, crunches the numbers to find out why Election 2012 was a victory for Democrats and crushing blow to Republicans.

THE PARADOX of the 2012 election was this: Some of the working-class groups hammered the hardest by the Great Recession were the very same ones whose votes re-elected the man who presided over that status quo.

And the irony will continue: The core constituencies of the Democratic Party, whose strong turnout for Barack Obama made the difference in a close election against Mitt Romney, will suffer disproportionately from the austerity agenda that Obama has openly pledged to continue in his second term in office.

The list of disappointments that millions feel about Obama's first four years in office is long, but it probably starts with the Wall Street bailout that restored the health of the banks while working people continued to suffer, and the failure to overcome the jobs crisis that has gripped the U.S. during his presidency.

Yet the electorate that re-elected Obama was making its presidential choice with exactly these questions in mind. When exit pollsters asked voters to name the "biggest economic problem facing people like you," almost half (46 percent) named "unemployment" or "the housing market." But about six in 10 of those voters went for President Obama. The 14 percent who named "taxes" went two-to-one for Romney, and the 37 percent who named "rising prices" split evenly between Obama and the Republican. 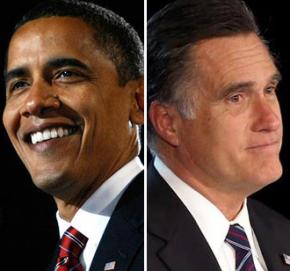 How could Obama have won on the very issues where his record is most dismal? The answer: More voters figured the Republicans would make things worse.

Romney and Ryan gambled that popular dissatisfaction with Obama would be enough to put them in a position to carry out the Republicans' long-term fantasy of tearing up the New Deal. That wager went sour. In fact, exit polls showed that more of the electorate blamed former President George W. Bush for the recession than Obama. Of the 77 percent who characterized economic conditions in the country as "not so good" or "poor," 38 percent still voted for Obama.

Why the gap favoring Obama? One explanation can be found in the answers to four main exit poll questions that tap into perceptions of the two candidates. Answers to these questions overlapped 90-95 percent of the time with the candidate that voters chose.

So rather than judging Obama on the record of his first four years in office, the majority of the 2012 electorate appears to have made a choice about what they want the next four years to look like. The Democrats successfully turned the election from the referendum on Obama that Romney sought to make it, into a "choice" between two alternatives for the next four years.

Those voters were right to be suspicious of the Republican ticket. But they are likely to find out very quickly that they don't like Obama's plans for the next four years either.

IF THE 2012 election didn't produce the same big turnouts of people inspired to vote for the first African American president as the 2008 election did, the Democrats still did manage to turn out who they had to and where they had to.

Overall, voter turnout looks like it will be down from 2008, though almost half of the decline is due to the impact of Hurricane Sandy on three states: New York, New Jersey and Connecticut. Given that Obama won all three states by comfortable margins, it's likely his 3 million-plus margin over Romney would have been even larger. At the same time, turnout in the nine major battleground states was up 3 percent compared to the 2008 turnout.

The composition of the electorate definitely supported the Democrats. In terms of race, the 2012 electorate was 72 percent white, compared to a 2008 electorate that was 74 percent white. The Latino vote rose as a percentage of the whole, accounting for one out of every 10 voters. And the percentage of young voters aged 18 to 29 actually increased by 1 percentage point over 2008.

If the various media post-mortems of the Romney campaign are to be believed, it was blindsided by an unexpectedly younger and multiracial electorate.

Meanwhile, the "gender gap"--the difference in voter preferences between men and women--was the highest ever recorded, according to Gallup. A majority of the electorate was women, and a strong majority of them picked Obama.

One thing that shouldn't be ignored is the degree to which race, class and gender overlapped within the Obama electorate. If only the votes of whites are counted, categories like "women" and "young adults" would have gone for Romney. But when the votes of women of color and young people of color are added to the total, the female and young electorate moved onto Obama's side.

By recognizing the social reality of the U.S. today and of the future--of a more multiracial population--the Democrats leveraged demographic change in their favor. To secure these votes, Obama's campaign made highly targeted appeals to segments of the coalition. To Latinos, he issued an executive order allowing undocumented youth to seek work permits under similar terms to the defeated DREAM Act. For LGBT voters, he said he personally supported same-sex marriage--though he didn't promise any action on the issue.

While it was certainly bracing to see the Democrats use so-called "wedge" issues against the Republicans--instead of vice versa, as has been the case for many elections past--we shouldn't forget that the Democrats' mild populist rhetoric also helped them. Six out of 10 Latino swing state voters supported the Obama administration's health care law, while even more Latino voters (66 percent) said that government should guarantee access to health care, according to a poll by the well-respected Latino Decisions.

The Obama campaign didn't win these different constituency groups on the basis of individual appeals. It won the majority of working-class voters who went to the polls on November 6.

One factor here is organized labor. For years, unions have "punched above their weight" in terms of their impact on elections. Even though the portion of the workforce that is unionized has declined to about 11 percent, union member households could still be counted on to make up 20-25 percent of the electorate. Thus, in 2004, union member households made up 24 percent of voters. In 2008, that dropped to 21 percent.

Still, while unions may not have been as important a component of the Democratic victory nationally, they were decisive in two victories of crucial Midwest battleground states: Ohio and Wisconsin.

Members of union households made up 22 percent of the electorate in Ohio and 21 percent in Wisconsin, and in both states, their vote was more lopsidedly tilted toward Obama than the national statistic. In Wisconsin, for example, union member households went for Obama 66 percent to 33 percent. And beyond just the votes, unions provided many of the foot soldiers for the Obama campaign in these and other states.

The Obama campaign and the national media attributed this boost from labor in Ohio and Wisconsin to "transactional politics"--electoral support for Obama in exchange for his support of the 2009 auto industry bailout.

But it's hard not to see impact of a broader labor mobilization in the major battles fought over union rights against hard-right Republican governors in Ohio and Wisconsin--the massive popular uprising against Wisconsin Gov. Scott Walker's attempt to strip public-sector workers of collective bargaining rights, and labor mobilization to defeat similar legislation from Ohio Gov. John Kasich in a lopsided referendum victory one year ago.

HOPEFULLY, ONE piece of conventional wisdom that the election results will put to rest is the notion that the U.S. is a "center-right" nation--one predisposed to support conservative politics and policies.

For the fifth time in the last six presidential elections, "blue state" America turned out more voters than "red state" America. And the sweep of referendum results confirmed a liberal trend, with initiatives in support of same-sex marriage, legalization of marijuana, trade union political activity, state funding for abortion, and immigrants' access to higher education all passing.

Nevertheless, all of these factors that played out in the vote will now come up against the reality of a bipartisan drive to impose conservative policies.

The Obama administration has made clear that its first item of business will be to seek a "grand bargain" on deficit reduction and "entitlement reform" with the Republicans. This may lead to tax increases on the rich, but it will also open the door to long-term cuts in Medicare and Social Security, the government's most popular programs.

In other words, Obama has openly signaled his desire to betray the faith of those who "trusted" him to deal with Medicare.

In the end, the election results this year prove a time-honored truth--that the working-class electorate stands to the left of the politicians of both parties, including the one that courts their votes and claims to defend their interests.

Perhaps one of these days, the pundits will recognize that it isn't the nation that's "center-right," but the U.S. government.