Standing up to civil wrongs

Eric Maroney reports on a gathering of activists challenging the war on civil liberties.

ABOUT 200 activists attended a December 8 conference entitled "An Injury to One is an Injury to All" to call attention to government violations of civil liberties.

The event, held at Central Connecticut State University, was organized by the Connecticut Coalition to Stop Indefinite Detention. The coalition was forged partly in response to President Barack Obama’s signing of the National Defense Authorization Act, which gives the U.S. government the ability to indefinitely detain without charges or trial any person, including any U.S. citizen, who is considered a threat to national security.

Participants attended from throughout New England and New York. The conference offered 12 sessions on topics ranging from preemptive prosecution and police entrapment of peace activists and Muslims to police spying and heightened surveillance of low-income communities of color. Keynote speakers Glenn Greenwald, a journalist who writes for Britain's Guardian newspaper, and Professor Sahar Aziz, a professor of constitutional law, spoke about the escalating attacks. 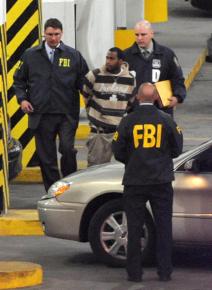 As Greenwald put it in his opening remarks:

It's really great to be part of an event that is grounded in the recognition of how important it is to build coalitions based on the premise that every group in the U.S. that is engaged in activism against the government, to check the government especially, is vulnerable to majoritarian oppression, has an equal stake in civil liberties and civil rights, and is equally affected when any one group has its rights abridged.

Themes echoed during the conference were the link between austerity and the need for government repression and the domestic use of repressive surveillance and detainment policies the U.S. uses abroad. Speakers emphasized that tactics which were once used primarily to police Muslim communities have also been trained on activist networks generally, including the nationally coordinated attacks on Occupy.

Dan Adam, an organizer of the conference and member of the Connecticut Coalition to Stop Indefinite Detention, summed up the need for such a conference with these words:

The present state repression in its many forms is already one of the central obstacles to the formation of much-needed social movements. We have no choice but to build a movement around defense against this repression. When some one-third of African American men are imprisoned in their lifetime, when federal immigration police are connected to the local cops, when some 30 to 40 percet of Americans are arrested by age 23, how can a serious social movement grow without taking on state repression? At the very least, we're coming out of this conference with a solid opportunity to strengthen existing solidarity networks around ongoing defense campaigns.

Dan Kwet, a member of the Connecticut Education Association, said that the conference was effective at making the case for common cause. “I thought it was really positive to see much of the discussion centered around the interconnection of our civil liberties," said Kwet. "There was a real understanding that simply stopping at protecting Muslims or African Americans was not going to be enough. We need to have a big picture to link our struggles up.”

Plans for a January follow up meeting are in place to help build the coalition.