Left to survive on the streets

Keegan O’Brien reports on the scope of LGBTQ youth homelessness and its impact.

EVERY YEAR, an estimated 1.7 million youth experience homelessness. According to data analyzed by the National Gay and Lesbian Task Force and the Human Rights Campaign, between 20 and 40 percent of these youth identify as lesbian, gay, bisexual, transgender or queer.

One in three of these LGBTQ youth homeless will be turned away from a shelter because of their gender identity/expression. Various studies show the extreme risks they face: 62 percent will attempt suicide, 58 percent will be sexually assaulted and 82 percent suffer at least one mental health problem.

Rejected by ignorant parents, bullied in school and with few societal resources to rely on, LGBTQ youth can turn to life on the streets as their best shot of escaping unsafe homes and schools. But rejection due to their sexual or gender identity isn't the only reason why these youth run away. Homeless LGBTQ youth report a combination of factors contributing to their decisions, including rape and incest, drug and alcohol addiction, poverty, difficulty in school and minimal economic opportunity. 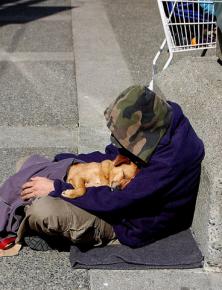 Homeless LGBTQ youth frequently form alternative support networks--often times with switched gender roles--in order to survive the brutality of life on the streets. These loving families demonstrate people's capacity to form compassionate relationships against all the pressures of a society that rewards greed and indifference.

But living on the streets requires taking tremendous risks to survive from day to day. Most such youth are left with no other option but to turn to alternative and often times illegal methods--such as sex work, stealing or drug dealing--to attain the most basic necessities like food and clothing. Due to the criminalization of sex work, these youth are exposed to HIV and sexually transmitted diseases at much higher rates.

LGBTQ youth also face enormous barriers to getting off the streets. An infographic at Feministing described the top three obstacles to creating a stable life off the streets:

An incomplete education makes it difficult for youth to secure work that pays a livable wage.

Drug abuse was cited as a key reason for remaining severely poor or homeless.

The criminalization of homelessness, drug use and sex work results in punishment at the hands of police and the court system--a further obstacle to getting off the street.

Bipartisan "tough on crime" laws hit the most vulnerable people in society the worst. This has been ideologically justified by demonizing the victims of oppression, while simultaneously sweeping them into prisons for "crimes" caused by poverty. As a result, LGBTQ youth make up between 13 and 15 percent of those currently in the juvenile justice system, according to one report.

Any meaningful solution to addressing homelessness or anti-LGBTQ discrimination must aim to dismantle the violence of mass incarceration and the prison-industrial complex. Decriminalizing drugs, legalizing sex work, providing protections for sex workers and adequately funding LGBTQ-friendly shelters and others services would be steps in the right direction.

WHAT MAKES the epidemic of LGBTQ youth homelessness most obscene is that it doesn't have to exists. Our society has the capacity and resources to put an end to homelessness altogether.

Congress and the Obama Administration just averted the "fiscal cliff" with an agreement that will still leave the mega-rich and corporations paying historically low tax rates compared to just a few decades ago. Plus, the politicians of both parties are united in carrying out massive cuts in domestic social spending, while leaving the world's largest military budget untouched.

If America can build prisons to incarcerate more people then any country in the world and send drones to bomb children in Pakistan, why does it "not have the money" to create state-of-the-art LGBTQ-inclusive homeless shelters? Well-funded, safe and inclusive schools? If ExxonMobil can make profits of $41 billion in 2011, why can't we provide free universal health care to all or mandate a living wage?

Only in a system that values profit over human need and tells us certain groups of people are worth less then others could the violence of homelessness and poverty be possible.

Unfortunately, the issue of LGBTQ homelessness has been deprioritized by mainstream LGBT political organizations such as the Human Rights Campaign (HRC). At best, the issue has been given token recognition.

If the HRC was less concerned with obtaining corporate sponsorships and rewarding businesses that profit from committing economic violence, including against working class LGBTQ people, then maybe it would spend more time building grassroots protest movements to challenge the politicians and demand justice and equality.

Thankfully, a new generation of young queer activists feels disconnected with Gay Inc.'s corporate agenda and wants to put the fight against homelessness and a wide range of racial and economic justice issues at the center of the struggle for LGBTQ social justice and equality.