Rachel Cohen reports on a study that documents how hundreds of pregnant women have had their rights violated and health put in jeopardy as part of the war on choice.

REGINA McKNIGHT was 21 years old when she was convicted and sentenced to 12 years in prison for homicide by child abuse--after she suffered a stillbirth eight-and-a-half months into her pregnancy.

The jury deliberated only 15 minutes before finding McKnight guilty of having committed "child abuse"--because of using cocaine during her pregnancy. She went to jail, and one appeals court after another upheld the conviction--until it was finally overturned eight years later on the grounds that the scientific evidence used to claim McKnight's drug use was responsible for the stillbirth was "outdated" at the time of her trial.

Laura Pemberton was arrested while she was in active labor--for attempting to give birth at home, rather than undergo a C-section advised by her doctor. A sheriff strapped her legs together and took her to the hospital, where, at an emergency hearing, lawyers argued on behalf of her fetus. Pemberton and her husband were denied counsel during this hearing, though they were "allowed to express their views" as hospital staff prepared Pemberton for surgery. 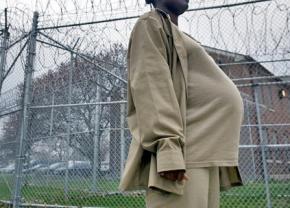 These stories aren't scenes out of some horror movie about a nightmarish future society. They are real-life accounts from the war on women and their rights that has been underway since the Roe v. Wade Supreme Court decision that legalized abortion in 1973.

In a new report titled "Arrests of and Forced Interventions on Pregnant Women in the United States, 1973–2005," the National Advocates for Pregnant Women (NAPW) summarizes the experiences of 413 women who have been subjected to cruel punishments or unwanted medical procedures while they were pregnant.

No state or federal law permits the arrest or detention of women specifically due to pregnancy. Yet hundreds of pregnant women--predominantly low-income women and women of color--have had their rights taken away and their health put in jeopardy because police, prosecutors, judges and even medical personnel have claimed the authority to determine what will happen to their bodies. Lynn Paltrow, one of the authors of the NAPW study, calls this phenomenon "a new Jane Crow"--in reference to author Michelle Alexander's best-selling examination of the mass incarceration system.

The crusade against women's reproductive rights has been led by politicians and organizations that claim to cherish the "right to life" and champion women's role as mothers. But the reality made painfully clear by the NAPW's report is that the anti-choice right wants women to be treated as second-class citizens, denied the right to health care, personal liberty and the right to control their own bodies and lives.

Report authors Lynn Paltrow and Jeanne Flavin say their study understates the number of incidents of incarceration or forced medical intervention against pregnant women in the decades following Roe.

No one has attempted to compile these stories before, and records of the cases are either scattered among different sources or nonexistent altogether. Often, say Paltrow and Flavin, hospital staff impose unwanted procedures without the involvement of state authorities. Plus, the decisions of family and juvenile courts are kept confidential. So the number of victims is likely to be many times greater than the 413 cases verified by the NAPW in its rigorous study.

Nonetheless, the patterns of punishment described in the report paint a frightening picture of the consequences of the right's campaign against reproductive freedom.

WHAT "CRIMES" were committed by the pregnant women whose stories are told in the NAPW report?

In the cases the report documents, women were most often targeted not for attempting to end a pregnancy, but for attempting to carry one to term. The main reason for arrest and detention was drug use during pregnancy, but in other cases, women were punished because they suffered from sexually transmitted diseases or mental illness while pregnant. Others wanted to deliver at home, refused C-sections or failed to access prenatal care.

In several cases, women were charged with one or more felonies after they suffered a miscarriage or attempted to end a pregnancy on their own. And in one case, state prosecutors used the fact that a woman had refused an offer of sterilization in support of its charges. This case, in particular, strikes an old and deep wound, following decades of forced sterilizations of Black, Latina, Native American and immigrant women.

In all, just over half of the women whose stories are collected in the report are Black. Nearly three quarters of those facing legal charges were represented by indigent defense.

African American women have suffered a long legacy of barbaric discrimination--from the separation of families under slavery to the early 20th century eugenics movement that pushed through laws in 32 states allowing the sterilization of women judged "unfit to breed."

Today, poor Black single mothers are scapegoated for all manner of social problems. In particular, the war on drugs has served as a vehicle for the attack, with drug convictions serving as the excuse for terminating parental rights of incarcerated mothers.

Meanwhile, the media have whipped up a moral panic over drug use during pregnancy. Thus, cocaine was the drug most often associated with the criminal charges against pregnant women documented in the NAPW report. But health professionals now recognize that cocaine use during pregnancy poses no more significant risk to fetal health than poor nutrition, lack of prenatal care or other factors commonly suffered by the poor.

In fact, in most of the cases documented in the report, authorities didn't claim that fetuses had been harmed, only that there was a risk of harm. And even when actual harm was alleged, in most cases, there was no scientific evidence or expert testimony to substantiate the claim.

For example, Geralyn Susan Grubbs, a 23-year-old woman in Alaska, was threatened with 30 years imprisonment and therefore pled guilty to a lesser charge of criminally negligent homicide in connection with the death of her two-week-old infant. Prosecutors claimed that drug use during pregnancy had caused the infant's death--this allegation was allowed to stand even after an autopsy revealed that there was no connection between the death of the child and fetal drug exposure.

Such punishment flies in the face of the recommendations of the medical community. Organizations like the American Medical Association have concluded that criminalizing drug use by pregnant women only discourages women from seeking prenatal care and assistance with their addiction.

Nonetheless, Paltrow and Flavin document how threats of arrest or loss of custody lead some pregnant women with drug problems to avoid medical attention, prenatal care and hospital deliveries altogether. In one particularly absurd case, 34-year-old Alma Baker was prosecuted for dealing drugs to a minor--after she gave birth to twins who tested positive for THC, a chemical found in marijuana. Baker stated that if she realized the risk of criminal charges, she would not have gone to her doctor at all.

Alma Baker is white, which makes her case highly unusual among those documented in the NAPW report. Women of all races use drugs at rates roughly equivalent to their numbers in the overall population--yet overwhelmingly those questioned, screened and punished for drug use related to pregnancy were African American.

PALTROW AND Flavin focus on an underlying logic among the various cases of detention and forced medical intervention: The idea that a fetus should be considered a person with full legal rights was consistently used to deny the rights and personhood of pregnant women.

In a number of cases, the state declared protective custody over a fetus in order to place pregnant women in medical or criminal detention. However, these detentions didn't result in adequate medical treatment.

When 20-year-old Wisconsin resident Rachael Lowe became pregnant, she sought medical assistance to break an addiction to Oxycontin. Hospital staff reported her to law enforcement, and she was transported to a hospital over an hour away from where she lived with her 2-year-old son. There, she was detained in a psychiatric ward. The state appointed a legal guardian for her fetus, but Lowe herself didn't receive legal counsel until 12 days after the beginning of her detention. She received no prenatal care inside the psych ward, and she was held for several days after a doctor testified at a court hearing that her drug use posed no health risk to her fetus, and the court ordered her release.

Julie Starks, a 25-year-old pregnant woman in Oklahoma, was detained when a juvenile court placed her fetus under protective custody. The state alleged that the trailer she lived in may once have been used to produce methamphetamine--and therefore declared that her fetus was a "deprived child." While detained in a county jail, Starks suffered dehydration, weight loss, infections and premature labor.

The NAPW's report covers only cases of detentions and medical interventions of pregnant women up to 2005, in order to try to compile cases where legal proceedings have been resolved. But researchers also uncovered more than 200 additional cases beginning over the last seven years. This significant increase coincides with a barrage of new laws restricting access to reproductive health services and criminalizing so-called feticide.

A total of 38 states plus the federal government have passed laws under which eggs, embryos or fetal tissue are covered under existing murder laws. And over the last two years, several states have attempted (and failed) to pass "personhood" measures to give legal rights and status for eggs, embryos and fetal tissue separate from the women carrying the pregnancy.

Some lawmakers and prosecutors have even invoked the Roe v. Wade decision itself as justification for such actions. The decision bans legal restrictions on abortion during the first two trimesters of pregnancy, until a fetus is considered viable to survive outside the womb. Some anti-choice politicians and prosecutors have argued that the decision equates fetal viability with fetal personhood. But the Supreme Court's conclusions in the Roe decision explicitly rejected the claim that a fetus at any point deserves rights or status separate from a pregnant woman.

The experiences of women like Ragina McKnight and Geralynn Susan Grubbs and Rachael Lowe and literally hundreds of others make it clear that these anti-women laws have nothing to do promoting health or civil rights--and everything to do with the most destructive and dehumanizing sexism and racism.