The kings of corporate welfare

WHO'S LIVING high on the hog off handouts and giveaways from the government?

If you're Republican Rep. Paul Ryan, the answer's obvious--it's the "takers" at the bottom of the income ladder who are raking it in from government programs. "[A]bout 60 percent of the American people get more benefits in dollar value from the federal government than they pay back in taxes," Ryan declared in 2010. "So we're going to a majority of takers versus makers in America."

If you're Barack Obama, you criticized Ryan and GOP presidential candidate Mitt Romney during the 2012 campaign for their upside-down view of who had it good in American society. But like all top Democrats, Obama shares the view that working people and the poor are also to blame for government deficits--and therefore everyone needs to sacrifice.

When he signed the fiscal cliff agreement at the start of the year that raised taxes somewhat on the richest of the rich, but hit ordinary working people just as hard with a hike in the payroll tax, Obama made his views clear: "The deficit needs to be reduced in a way that's balanced. Everyone pays their fair share. Everyone does their part." 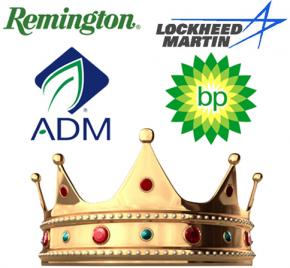 But you, the reader, are almost certainly neither Paul Ryan nor Barack Obama. And if you're reading SocialistWorker.org, you probably know or suspect that both of them got it wrong.

Neither Republicans nor Democrats talk about the real welfare cheats: Corporate America, which profits from a little-talked-about, but extremely lucrative array of subsidies, tax breaks and other government handouts.

Big business even managed to come out ahead in the fiscal cliff deal, when the Obama administration worked with Congress to preserve more than $200 billion in so-called "tax extenders" for businesses of all kinds. And that's on top of a system in which some of the biggest corporations in the U.S.--the real takers--pay no taxes while making record profits, thanks to ruthlessly exploiting their workers, while raking in big money in subsidies.

THE FEDERAL government's huge subsidies to Corporate America are so commonplace that the media establishment barely notices. But the amount of money is immense, and what's more, it ends up in the pockets of the richest corporations, including those with a demonstrably negative impact on the majority of people in society.

Perhaps the most outrageous of the government subsidies is the vast amount of public money--tens of billions of dollars from the federal government alone--handed to the oil and gas industry.

Not only are these companies awash in cash, but the use of their product is the leading cause of the greenhouse gas emissions driving catastrophic climate change. The fossil fuel extraction process in North America alone--from deepwater drilling in the Gulf of Mexico to the development of tar sands in Canada, with fracking everywhere in between--threatens ecosystems with dangers ranging from the BP oil spill to everyday pollution.

The costs associated with climate change aren't borne by the oil and gas industry, but by ordinary people. Hurricane Sandy and severe droughts across the Midwest--disasters made more likely and frequent by climate change--caused as much as $100 billion in damages in 2012. And those are just the major disasters.

Beyond the government subsidies, the infrastructure of the U.S. is designed to force people to rely on fossil fuel-burning automobiles for transportation, guaranteeing the industry a massive market for their product. Yet instead of using tax revenue to build reliable, affordable green public transportation systems, these systems are starved of resources by budget cuts, forcing fares to increase and service to be cut--while billions of dollars continue to flow into the pockets of the oil and gas giants.

Another major recipient of subsidies puts our health and safety at even greater risk: nuclear power. This industry literally wouldn't exist if not for government largesse.

For one thing, the cost of the devastation caused by accidents at nuclear power plants is so great that purchasing private insurance would be prohibitively expensive. Instead, the nuclear industry is only responsible for the first $12.6 billion in damages in the case of a disaster. Taxpayers are on the hook for the rest--and the costs of a nuclear meltdown at a U.S. plant have been estimated at $720 billion in today's dollars. Of course, much of the damage to life, health and the environment from such a disaster would be irreversible.

As the Union of Concerned Scientists pointed out in 2011, subsidies protect dangerous and expensive nuclear power at the expense of safer, more environmentally friendly alternatives:

Nuclear subsidies effectively separate risk from reward, shifting the burden of possible losses onto the public and encouraging speculative investment. By masking the true cost of nuclear power, subsidies also allow the industry to exaggerate its economic competitiveness; consequently, they diminish or delay support for more economical and less risky alternatives like energy efficiency and renewable energy.

THE DARK secrets about federal government subsidies extend beyond the energy sector.

Another major recipient is agribusiness. Each year, billions of taxpayer dollars are appropriated to help "farmers"--and they mostly end up in the bank accounts of giant corporations like Archer Daniels Midland and Cargill. According to a recent study by U.S. PIRG, "Since 1995, taxpayers have spent over $277 billion on agricultural subsidies. Reflecting the political clout of the biggest producers, the lion's share of agricultural subsidies go to a very small number of large operations--75 percent of subsidies go to just 3.8 percent of U.S. farmers."

Rather than subsidizing healthy foods, a much larger share of federal handouts go to commodities that are used to produce junk food. U.S. PIRG found that "only one of the top 20 federal [agricultural] subsidy programs directly supports a fresh fruit or vegetable: apples."

Subsidies to U.S. agribusiness have a devastating impact on farmers in other countries, who can't compete with American products that are so heavily subsidized. For example, millions of Mexican farmers were pushed off their land when NAFTA removed tariffs protecting them from competition from subsidized U.S. corn and other agricultural goods. Thanks in large part to U.S. government subsidies, Mexico--the first place in history where corn was cultivated--is now a net importer of corn.

But the subsidies for agribusiness seem almost humane when contrasted to the vast sums of government money given away to the arms industry.

In 2010, world military spending was $1.63 trillion, according to the Stockholm International Peace Research Institute, with the U.S. accounting for over 40 percent of the world's total. And a lot of this spending came in the form of government money given to private companies that produce weapons, airplanes, drones, trucks, personnel (mercenaries) and military equipment and related services.

Of the top 10 recipients of federal government contracts in 2011, all were corporations in the "defense" industry. The top 10 alone received nearly $150 billion in 2011. Lockheed Martin, the top recipient of federal contracts, received over $42 billion in 2011, which accounted for more than three-fourths of its revenue.

And while politicians today, especially Democrats, talk about gun control, governments are subsidizing corporations that produce the same type of weapons being used in the mass shootings that led to demands for gun control. For example, New York state has subsidized Remington Arms to the tune of $5.5 million since 2007, supporting the production of semiautomatic rifles that are illegal in the state.

The harm of corporate subsidies is clear even in an industry that is clearly about mass entertainment: professional sports. Despite receiving millions in tax breaks and subsidies to build stadiums, ticket prices charged by pro sports teams continue to be beyond the means of most people. And while the stadiums are publicly funded, the profits end up in the owners' pockets. According to Nation sportswriter Dave Zirin:

In sports, corporate welfare is embodied in the public funding of stadiums. This is like a neoliberal Trojan Horse: wrapping organized theft of the public till in the packaging of sports. These days, the only way many working class and poor fans can attend games is if they're working in the stadiums.

Notice that the cities with the most publicly funded, gleaming stadiums--Pittsburgh, Cleveland, Detroit--are also places that have de-industrialized. Stadiums act as ways to change the very nature of work in the so-called Rust Belt from union jobs with benefits to service, "seasonal" work at poverty wages. It's sickening because it exploits what has historically been identified with community cohesion--sports--and turned it into a blunt instrument of community destruction.

FEDERAL GOVERNMENT subsidies are just one part of the picture. State and local governments also lavish tens of billions of dollars on corporations in an effort to attract investment.

The odds in this game favor big business. Companies can demand subsidies from states and localities in the form of tax breaks and other incentives in exchange for their promises--often hollow--to create or retain jobs in the area. A recent study by the New York Times calculated state and local corporate subsidies worth over $80 billion each year--although according to the Times, "the cost of the awards is certainly far higher." Reporters identified over 150,000 separate subsidies, but were unable to track them all.

Businesses routinely use the threat of moving to another city, state or even out of the country in order to extort more tax breaks and subsidies. According to the Times:

Over the years, corporations have increasingly exploited that fear [of corporations moving jobs overseas], creating a high-stakes bazaar where they pit local officials against one another to get the most lucrative packages. States compete with other states, cities compete with surrounding suburbs, and even small towns have entered the race with the goal of defeating their neighbors.

There's no proof that meeting the corporations' demands for advantages is beneficial to states or local communities--but there is plenty of evidence suggesting otherwise.

The Times study, for example, found that Texas offers more incentives to businesses than any other state. While the state has seen significant increases in employment, for the most part, the jobs don't pay a living wage. Texas, the Times reported, "has the third-highest proportion of hourly jobs paying at or below minimum wage. And despite its low level of unemployment, Texas has the 11th-highest poverty rate among states."

Of course, extracting subsidies or tax breaks doesn't bind companies to remain in a given area. They are typically free to take the money and run if they get a better offer somewhere else--which, in turn, is used as leverage to get even more concessions.

By playing states and localities off against one another, Corporate America is encouraging a race to the bottom. Not only are workers' wages and benefits driven down, but public funds that could be spent on public-sector jobs and providing services like education, health care, parks and public transportation are instead handed to private corporations in the interest of creating low-paying jobs.

So whether or not a given city or state "wins" the zero-sum competition of attracting jobs, workers everywhere lose. Making a region "business friendly" means making it hostile to workers and especially the unions that represent them. When workers' living standards decline in one area, it puts a downward pressure on wages and benefits everywhere else.

But the opposite is also true. When workers organize to improve wages, benefits and working conditions, they have positive impact on other workers, workplaces and communities.

Instead of competing for jobs with other regions by handing more public money to private corporations, workers have an interest in building solidarity across borders, whether local, state or national.