Despite signs of public discontent about the use of drones, the Obama administration is employing them more frequently--and more aggressively--explains Eric Ruder.

DO YOU think it was appropriate for PBS's acclaimed science show NOVA, when it aired a recent segment on drone aircraft, to accept funding for the show from Lockheed Martin, a major manufacturer of drones?

No? Well, neither did the PBS official in charge of monitoring the network's adherence to its own editorial policies.

But NOVA producers did accept the money--and they defended their decision, despite its clear violation of PBS's rules on funding.

But whether or not Lockheed Martin's financial backing affected the final product, NOVA's "Rise of the Drones" segment was nothing more than an hour-long infomercial for all the gee-whiz stuff drones are capable of.

The need for a probing assessment of the use of drones couldn't be more urgent. On February 7, the Senate held confirmation hearings for the Obama administration's nominee to head the CIA: John Brennan, who during the president's first four years oversaw the administration's program of targeted killings, carried out most often by drone aircraft strike. The hearing was repeatedly interrupted by activists pointing out that Brennan was responsible for countless civilian deaths because of his complicity in the use of drones in Pakistan. 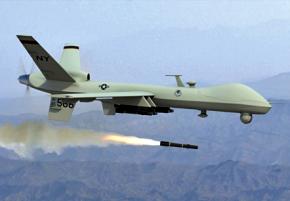 That same day, the Seattle Police Department decided to shelve its plan to deploy drones equipped with spy cameras after a public outcry by residents angry about potential violations of privacy rights. Then, four days later, media outlets reported that the manhunt for rogue ex-LAPD cop Christopher Dorner might make use of drones.

Shortly before Brennan's hearing, the Justice Department made public a secret legal memo outlining the Obama administration's contorted legal justifications for its program of assassination of American citizens. The memo makes the chilling assertion that the president may order the killing of U.S. citizens even in the absence of due process. In other words, Obama and his inner circle can serve as judge, jury and executioner.

As the New York Times observed:

If President Obama tuned in to the past week's bracing debate on Capitol Hill about terrorism, executive power, secrecy and due process, he might have recognized the arguments his critics were making: He once made some of them himself. Four years into his tenure, the onetime critic of President George W. Bush finds himself cast as a present-day Mr. Bush, justifying the muscular application of force in the defense of the nation while detractors complain that he has sacrificed the country's core values in the name of security...

By emphasizing drone strikes, Mr. Obama need not bother with the tricky issues of detention and interrogation because terrorists tracked down on his watch are generally incinerated from the sky, not captured and questioned.

THE RAPID increase in the use of unmanned aerial vehicles, as the military prefers to call them, began with the U.S. invasion of Afghanistan in October 2001, marking the first time the U.S. military used drones armed with weapons.

Since then, the CIA has deployed drones to wage war far from any war zone--which is precisely why drones have figured so centrally in the Obama administration's global military strategy. Because drones aren't piloted, the U.S. can deploy violence without risking casualties--or, worse, the messy fallout that would accompany a pilot of a downed plane being captured.

But drones are even better equipped when it comes to evading such concerns as whether the use of lethal force is even legal under international law. The U.S. has only officially declared war in Afghanistan, yet its drones have been used many times in Pakistan, Yemen and Somalia, to name but a few countries.

That fact was openly acknowledged in the NOVA segment. Early on, it stated what is supposed to be the open-and-shut case for the use of drones: 70 percent of the top leadership of al-Qaeda has been killed by drone strikes. At the three-minute mark, viewers get to see a montage of their faces, including Mustafa Abu Al-Yazid, Anwar al-Awlaki, Abu Musab al Zarqawi and--

Hold on a moment. Though NOVA doesn't mention it, al-Awlaki was a U.S. citizen, killed by a drone strike in Pakistan on September 30, 2011. He was on a secret American "kill list," but another U.S. citizen--Samir Khan--killed in the same drone strike wasn't on that list. Nor was al-Awlaki's 16-year-old son, killed a couple weeks later by another drone strike.

The secret legal memo is the basis for the Obama administration's claim that it's justified in carrying out such assassinations of American citizens--but the memo goes even further. In the words of journalist Glenn Greenwald:

The most vital fact to note about this memorandum is that it is not purporting to impose requirements on the president's power to assassinate U.S. citizens. When it concludes that the president has the authority to assassinate "a Senior Operational Leader of al-Qaeda" who "poses an imminent threat of violent attack against the U.S." where capture is "infeasible," it is not concluding that assassinations are permissible only in those circumstances. To the contrary, the memo expressly makes clear that presidential assassinations may be permitted even when none of those circumstances prevail...

Critically, the rationale of the memo--that the U.S. is engaged in a global war against al-Qaeda and "associated forces"--can be easily used to justify presidential assassinations of U.S. citizens in circumstances far beyond the ones described in this memo.

Greenwald goes on to explain how Obama has given himself the power of judge, jury and executioner:

[W]hen this memo refers to "a Senior Operational Leader of al-Qaeda," what it actually means is this: someone whom the president--in total secrecy and with no due process--has accused of being that. Indeed, the memo itself makes this clear, as it baldly states that presidential assassinations are justified when "an informed, high-level official of the U.S. government has determined that the targeted individual poses an imminent threat of violent attack against the U.S."...

The definition of an extreme authoritarian is one who is willing blindly to assume that government accusations are true without any evidence presented or opportunity to contest those accusations. This memo--and the entire theory justifying Obama's kill list--centrally relies on this authoritarian conflation of government accusations and valid proof of guilt. They are not the same and never have been. Political leaders who decree guilt in secret and with no oversight inevitably succumb to error and/or abuse of power.

THE OBAMA administration has basically made the case for removing any legal prohibition on the assassination of U.S. citizens on American soil. Thus, when Sen. Ron Wyden (D-Ore.) asked Brennan during the confirmation hearing whether "the president can use this authority [against U.S. citizens] inside the United States," Brennan's replied:

What we need to do is optimize transparency on these issues, but at the same time optimize secrecy and the protection of our national security. I don't think that it's one or the other. It's trying to optimize both of them.

So Brennan isn't prepared to state that drones won't be used to carry out executions of American citizens, even on U.S. soil.

Yet there is almost no recognition in the mainstream media of just how far the administration has gone. This is why we need real debate, not infomercials, about the use of drones--and why we need to challenge the Obama administration's aggressive assertion of practically unlimited executive powers to assassinate anyone, anywhere in the world.