What’s in the climate change bill?

DAYS BEFORE last month's climate change demonstration on the doorstep of the White House, two Senate Democrats introduced legislation that they say would put the U.S. on the path to cutting greenhouse gas emissions by 80 percent by 2050.

But questions remain among environmentalists about shortcomings in the bill--and even more, whether the Obama administration and Democratic leaders in Congress will fight the uphill battle necessary to turn the proposal into law.

Sens. Barbara Boxer and Bernie Sanders announced their proposal to the media on February 14, while flanked by liberal environmental activists like Bill McKibben. The founder of 350.org had been arrested the day before outside the White House in a civil disobedience action organized in conjunction with the larger rally to come against the Keystone XL tar sands pipeline.

Boxer and Sanders' legislation contains many features that McKibben and other activists support:

It would impose a fee, starting at $20 per ton of carbon emissions (or the methane equivalent), at nearly 3,000 production facilities, such as coal mines, oil refineries and natural gas processing plants. This way, the fee would be imposed on the fossil-fuel producers themselves, responsible for an estimated 85 percent of U.S. greenhouse gas emissions, according to the Congressional Research Service. 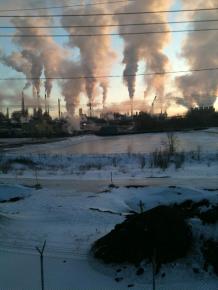 The carbon fee would raise $1.2 trillion in revenue over 10 years, according to Boxer and Sanders' estimate. They say the legislation alone would reduce greenhouse gas emissions by 20 percent by 2025--and further reductions would be achieved with other energy-saving and anti-pollution initiatives.

Three-fifths of the $1.2 trillion in revenues from the carbon fees would be devoted to a system for returning money to consumers, to offset the inevitable price increases when energy companies try to pass along the costs of the fees.

Boxer and Sanders' legislation represents a concrete step beyond what the senators say inspired their proposal: Barack Obama's statement in his State of the Union address that if Congress didn't act on climate change, his administration would take executive action to limit greenhouse gas emissions.

Environmentalists have rightly pointed out that Obama spoke out of both sides of his mouth during this speech. He even boasted at one point that the administration "will keep cutting red tape and speeding up new oil and gas permits"--the exact opposite of what's needed to curb climate change.

Boxer and Sanders' proposal provides concrete measures that could be implemented now--but the real question is whether Obama and other leading Democrats will take up the legislation and fight for it. Boxer made a telling admission to Politico that she and Sanders hadn't asked Senate Majority Leader Harry Reid for support. This reinforces the common sense among media analysts that the legislation is symbolic and doesn't stand a chance of becoming law.

In fact, Republicans immediately attacked the bill with the tired excuse that it would damage the economy. Getting the legislation through the GOP-run House would require an intensive campaign by Obama and the Democrats.

The Democrats have a history of allowing liberals to propose progressive measures, knowing full well that the Republicans will shoot them down and the party as a whole will do nothing to stop it. Whether Boxer and Sanders' legislation survives this fate will depend on whether the environmental movement--energized by its biggest climate change demonstration to date last month--continues to step up the pressure.

THE PROPOSAL at the center of the Boxer-Sanders bill--the "fee" on carbon emissions and the "dividend" to consumers--represents a new twist on old proposals for a carbon tax, writes the San Francisco Chronicle's Carolyn Lochhead. Specifically, it puts "a price on carbon at its source and [rebates] most of the money back to U.S. residents. Modeled on Alaska's 'permanent fund' that rebates oil royalties to Alaska residents, the idea has been promoted by [Bill] McKibben and NASA climate scientist James Hansen."

But Boxer and Sanders undercut the "fee-and-dividend" plan in a crucial respect: Their legislation would only rebate 60 percent of revenues from the carbon fee, leaving the likelihood that consumers would part of the price increases--since energy companies wouldn't be restricted in any way from passing on the cost.

Worse, the two Democrats make a completely unnecessary nod to "deficit hawks" by proposing that 25 percent of carbon fee revenues be used to reduce the deficit. The real solution to the deficit is taxing the rich.

The 100 percent redistribution of the carbon fee is a crucial element of James Hansen's climate change "exit strategy." Hansen argues that unlike previous proposals for "cap-and-trade" legislation, the 100 percent rebate to the public would keep the burden of the carbon fee on corporations and the rich--as it should be, since they are disproportionately responsible for greenhouse gas emissions, as Marxist environmentalist John Bellamy Foster explained:

The Congressional Budget Office estimated in 2007 that the carbon footprint of the top quintile [or 20 percent] of the U.S. economy was more than three times that of the bottom quintile. Likewise, the Carbon Tax Center reports that in 2005, the top quintile accounted for 32 percent of total gasoline consumption in the United States, while the bottom quintile account for 9 percent.

Hansen's insistence on offsetting the impact of climate change legislation for ordinary people is important given the past decades in which the environmental movement has been pitted against the working-class movement--with some mainstream environmentalists viewing the working class as unthinking drones destroying the earth for a paycheck, while many labor leaders attacked environmental proposals for "killing jobs."

Sadly, we saw this false dichotomy replayed last month when the AFL-CIO Executive Council issued a statement implicitly supporting the Keystone XL tar sands project. Though its call to expand the pipeline system didn't explicitly mention Keystone, the statement was taken as an endorsement, especially with union-backed Democrats in Washington apparently preparing to give approval to the tar sands pipeline.

This conflict plays into the hands of the fossil fuel industry--which is why it's so important that Hansen stresses the centrality of class demands, like providing resources so that workers in non-sustainable industries can find a place in renewable industries.

From retiring polluting factories and power plants to building up solar power and wind farms, workers need to have an organic relationship to the environmental movement at the point of production--something that can make the "Turtles and Teamsters unite" slogan of the global justice movement a powerful reality.

EVEN WITH 100 percent redistribution, Hansen's "fee-and-dividend" proposal is not without limitations. It builds on conservative proposals that leave the actual decisions regarding fossil fuel production and use in the hands of corporations--though, of course, right-wingers strenuously oppose the "dividend" part of the plan.

Foster calls Hansen's proposal a "starting point for a realistic climate-change exit strategy," but he also points out that it is:

mostly a top-down, elite-based strategy of implementing a carbon tax with the hope that this will spur the introduction of necessary technological changes by corporations. To be sure, Hansen stresses the democratic nature of the plan...He also suggests that the 100 percent redistribution element in the fee-and-dividend strategy must be backed up by the threat of the wider public to "fight" if this is interfered with...Yet his plan includes no call for a general ecological-cultural revolution against the U.S. power structure...

[T]he Hansen exit strategy for all of its strengths is itself insufficient. Its weakness is that it does not go far enough in addressing the social-systemic contradictions generated by the power structure of today's monopoly-finance capital. What is needed under present circumstances is an acceleration of history involving a reconstitution of society.

The kinds of changes to be considered in the context of a planetary emergency cannot be confined within the narrow channels that the ruling class and its political power elite will accept. Rather an effective climate-change exit strategy must rely on the much larger social transformation that can only be unleashed by means of mass-democratic mobilization.

Foster's point underlines an essential truth that the environmental movement must embrace--that just as we can't wait for the Democrats to champion the proposal put forward by Boxer and Sanders, we can't stop with solutions that leave the power to destroy the planet in the hands of a super-rich elite.

As Chris Williams, author of Ecology and Socialism, points out, the problem is social, not technical. Studies in prestigious journals like Scientific American and Energy Policy have shown we have the capacity to shift to 100 percent renewable energy by the year 2030. But the structure of a capitalist system that puts profits first blocks this potential.

History teaches us that social change comes when ordinary people mobilize to demand it. Thus, Richard Nixon, a corrupt and conservative Republican, presided over the passage into law of the Clean Air and Clean Water Acts and the establishment of the Environmental Protection Agency. These weren't gifts from a benevolent leader, but sweeping changes brought about by the pressure of mass movements, on Nixon and on all the lawmakers in Washington.

Time magazine's Michael Grunwald compared the environmental movement's mobilization against the Keystone XL pipeline to "Selma and Stonewall. In a war, you don't always get to choose where to fight. You still have to show you're willing to fight." That's the way forward for the movement today.

In the 15 years since the Kyoto Protocols to address global warming, too many environmentalists have respectfully asked for politicians to make a plan for a sustainable energy policy. Twelve of those 15 years have been the warmest on record.

Only when we lose respect for those willing to destroy the planet and build a radical environmental movement, with the working class at its heart, will we be able to stop fracking, stop strangling the earth with pipelines, save the planet, dump the oil companies and build a new world based on solidarity and sustainability.