A tale of two economies

The goal of the ruling class austerity agenda couldn't be clearer: If we lose, they win.

HAPPY DAYS are here again...for some.

Earlier this month, the ongoing stock market rally pushed the Dow Jones Industrial Average past a long-awaited milestone--the high point that the stock market indicator reached more than five years ago, before the Wall Street meltdown and the Great Recession. So the stock market is back to where it was before the crisis hit.

Corporate profits, meanwhile, had rebounded to pre-recession levels a few years earlier, but they continue to hit new highs. According to economic journalist David Cay Johnston, pretax corporate earnings soared from less than $1.5 trillion in 2009 to nearly $2 trillion two years later. The New York Times calculates that profits have increased at an average annual rate of more than 20 percent since the end of 2008.

And for the really, really special someones, the good times have never been so good. Forbes magazine's annual list of the world's billionaires reports that 210 people passed the 10-figure mark in 2012. There are now 1,426 dollar billionaires around the globe, with a collective fortune of $5.4 trillion--equal to about one-third of the annual economic output of the U.S. economy, and a 17 percent increase in wealth over last year. 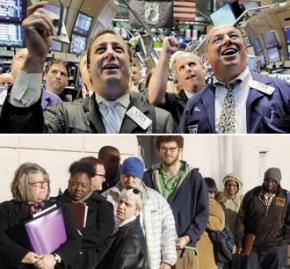 Bet your wages didn't go up by 17 percent last year.

No, as left-wing writer Naomi Klein put it, "For workers, the recovery looks more like a stick-up."

After accounting for inflation, median household income dropped steadily from a 2007 peak through 2011. The statistics for 2012 will probably show the first increase in five years, but it won't come close to making up the more than 9 percent drop from the start of the recession.

Economic analysts celebrated stronger-than-expected job growth in February--a net total of 236,000 jobs were added to payrolls over the month, according to the government's official count. But that statistic hid the bigger picture: The economy is still millions of jobs away from making up the 8.9 million loss from the recession--and that's not to mention the nearly 6 million jobs that should have been added since to keep up with the growth of the working-age population.

Even at February's relatively strong pace, it will take more than five years to make up the difference.

More and more, the U.S. economy looks like the U.S. economies. There's one for the rich and the corporations that, though not without its weaknesses, has been looking up for some time. Then there's the scramble-to-get-by economy for the rest of us--where wages stagnate, unemployment hangs on at high levels, and living standards for the majority keep on falling.

EVEN THE mainstream media is commenting on this tale of two economies. The New York Times put it starkly in a featured article: "[T]he split between American workers and the companies that employ them is widening and could worsen in the next few months as federal budget cuts take hold."

One consequence is that U.S. corporations are sitting on a giant pile of cash, equivalent to around 10 percent of total annual gross domestic product, according to JPMorgan Chase strategist Michael Hood. "It's not that companies are hoarding money," Hood wrote last December, "it's that they are making so much money, there aren't enough places to spend it."

The Federal Reserve's estimate of the cash stockpile of U.S. corporations has varied from around $1.5 trillion to more than $2 trillion--but David Cay Johnston argued last year that this number is an underestimate, because the Fed only looks at money in the domestic economy. His calculation, based on data from the IRS on worldwide operations, is that U.S. nonfinancial corporations held nearly $5 trillion in liquid assets in 2009.

How did the pile of corporate cash get so big? As Johnston's much larger figure for multinational operations implies, one reason is that it makes financial sense for businesses to keep a lot of their earnings outside the U.S. "Congress lets overseas profits accumulate untaxed, so long as offshore subsidiaries own the cash," Johnston wrote.

For Corporate America, the same logic from before the crisis applies today: If opportunities for job-producing investments in new operations don't promise a high enough return, it's better to hold onto the cash--or gamble it in Wall Street's casino. Thus, the corporate profit bonanza is one of the sources for the comeback of the stock market.

Another major source is you and me--not as investors, of course, but because our tax dollars have been funneled into the U.S. banking system, courtesy of the Federal Reserve.

When the international financial system went into crisis in 2008, the response of the U.S. and other powerful governments was to flood the banks with money--to the tune of some $6 trillion from the five major central banks since the end of 2007, according to a New York Times report based on figures from the Bank of International Settlements.

In the U.S., a lot of big banks returned to profitability quickly--thanks to their access to loans from the Fed at rock-bottom interest rates, while the Fed took over bad debts. For a time, Wall Street favored safer vehicles for this easy money, like Treasury bonds. But as the outlook for the economy grew rosier--at least for them--the big investors got back into the stock market.

Ethan Harris, an analyst with Bank of America Merrill Lynch, estimates that about half of the stock market's 13 percent increase during 2012 was the result of the Fed's policies.

It's worth remembering that this has happened before. Back in the late 1990s, the Fed followed a policy of super-low interest rates and "quantitative easing" in response to the worldwide slump that began in Asia--and one result was the stock market's Internet bubble. During the Bush years in the 2000s, the government found another way to put money in the hands of the rich--massive tax cuts--and that contributed to the real estate bubble.

Now, after an even more colossal intervention by the Fed, quantitative easing still isn't creating new jobs, by and large--but it's sloshing around a stock market that's returning to its old over-valued levels.

MOST GALLING of all is the fact that, at the same time as U.S. corporations set new profit records and the Fed pumps more taxpayer billions into the banks, the business and political elite demand that everyone else to tighten their belts--and submit to the bipartisan austerity agenda.

One dark spot in the February jobs report was public-sector employment, which fell by 10,000 jobs. Payrolls for federal, state and local government have been declining for more than a year, and there's worse to come. Unless Congress and the White House reach a deal to head off the automatic "sequester" cuts that started going into effect March 1, federal spending will be slashed by another $85 billion, and the economy will lose another 700,000 jobs--disproportionately higher-paying ones with benefits, too.

The sharp edge of the attack on jobs and living standards is coming in the public sector right now, but the effects go deeper--something reflected in the huge number of working-age adults who don't have jobs, but aren't counted as unemployed. As the Centre for Research on Globalization website pointed out, between February 2007 and February 2010, the percentage of the U.S. population with employment dropped from 63.3 percent to 58.5 percent--and the figure remains exactly the same now, three years later.

One major reason for this stagnation is another secret of the boom for the few: a dramatic increase in productivity. Simply put, Corporate America is getting more economic output from fewer workers.

As for the future, United Technologies isn't planning on any investments to create new jobs. On the contrary, it plans to eliminate another 3,000 positions this year--on top of the 4,000 shed last year.

Some sectors of Corporate America are expanding investment. Notably, energy companies are presiding over a boom in both natural gas production through fracking and oil exploration to tap sources such as Great Plains shale oil and Canada's tar sands--despite the catastrophic threat to the environment.

But for the rest, the strategy is an old one--make workers who have jobs work harder for less. The austerity agenda applies to both the public and private sector, and it's being pursued by ruling classes internationally--with the aim of imposing a deep and permanent cut in living standards for the working-class majority.

U.S. business wants a labor force that can compete with China, Brazil and other industrializing countries. That means continuing the downward pressure on wages and benefits, plus slashing the social wage--government spending on education, health care, retirement systems and more.

Thus, the tale of two economies isn't an aberration that will be swing back into line in the future. It's the goal of the ruling class strategy: If we lose, they win.

Last December, Robert Brusca, an economist with FAO Research, put it concisely in explaining what he called the "natural tension" between profits and labor costs. "That's how it works," he told CNN. "If one gets bigger, the other gets smaller."

If that sounds familiar, it may be because Karl Marx was making a similar point, starting around 170 years ago: "The worker becomes all the poorer the more wealth he produces."

Capitalism is based around the drive to maximize the profits and power of the few, no matter what the cost to human beings or the environment or anything else. Ultimately, the only way to stop this drive is struggle--the immediate struggle to reduce the scale of the robbery so that the working-class majority enjoys better conditions of life, and the long-term struggle to end the theft once and for all.