A vote on UTLA’s direction

Randy Childs, a Los Angeles teacher and UTLA activist, explains how a vote in the union offers hope for a new strategy to confront the corporate school deformers.

MEMBERS OF United Teachers Los Angeles (UTLA) have an opportunity to vote on a referendum called the "Initiative for the Schools LA Students Deserve," with ballots cast through April 10. This initiative calls for a dramatic shift in the strategy that UTLA uses in its dealings with the Los Angeles Unified School District (LAUSD) and self-styled "reformer" Superintendent John Deasy.

Under the UTLA constitution, a petition signed by at least 500 UTLA members can trigger membership votes on measures like this, as a means of changing union policy. Organizers of the Initiative for the Schools LA Students Deserve gathered 1,130 signatures in just a couple of weeks.

The petition calls for UTLA to "be a force for positive school change by actively collaborating with parents, students, school communities and other educational allies and advocates to create a citywide campaign" that raises demands for smaller class sizes, restoring school programs that have been devastated by recent budget cuts and layoffs, equitable services for all students, a reversal of the trend of excessive standardized testing and more. 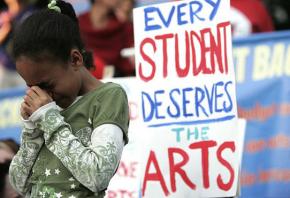 The petition also calls for UTLA to redirect union resources and staff to support such a campaign and plan an escalating series of actions and strike preparation to give our demands some needed organizational muscle.

The initiative is backed by a wide coalition of rank-and-file leaders and activists in UTLA, with significant organizational support provided by Progressive Educators for Action (PEAC). PEAC is a dissident caucus within UTLA that aims to remake our union into a well-organized fighting force for our members' rights at the workplace, quality public education for all students, and a vision of social movement unionism.

PEAC has a history of collaborating with progressive rank-and-file groups in other big city teacher unions, including the Caucus of Rank and File Educators (CORE) in Chicago. Since winning top positions in the Chicago Teachers Union in a 2010 election, CORE has transformed CTU into a powerful force for teachers and public education, culminating in their successful strike against Mayor Rahm Emanuel last September.

For PEAC activists, CORE's gains in Chicago provide an example we want UTLA to emulate, including the CTU research study "The Schools Chicago's Students Deserve," which articulates a progressive and pro-union vision for public schools. The study inspired the name of the UTLA initiative.

A strong "yes" vote for the Initiative for the Schools LA Students Deserve will not only make it official UTLA policy to launch such a campaign, but also send a message that thousands of UTLA members want to fight for an alternative to the dominant corporate agenda of slashing resources for public education and then blaming teachers when schools struggle.

We need to send that message loudly--to the LAUSD bureaucrats who are wrecking our schools and to the UTLA leadership that is supposed to be leading the resistance to LAUSD attacks.

UTLA HAS lost thousands of members in the last few years to layoffs and the outsourcing of public education to privately managed--and mostly non-union--charter schools. UTLA members haven't had a raise since the recession started and have endured pay cuts in the form of furlough days the past three school years.

Deasy and his allies on the LAUSD School Board, led by Board President Monica Garcia, have waged a scorched-earth campaign of attacks and scapegoating of UTLA members--from accelerating the spread of charter schools, to replacing entire teaching staffs at underfunded schools in poor neighborhoods, to demanding that teachers' evaluations hinge on student scores on those ubiquitous, joy-crushing, curriculum-narrowing standardized tests.

Life as an LAUSD teacher the past few years--for those of us who haven't lost our jobs--has meant being forced to do more work for less pay while watching helplessly as your colleagues get laid off, your school gets turned into a test prep factory, and your students' needs get ignored.

Meanwhile, the very politicians and bureaucrats slashing our students' futures make hypocritical pronouncements about their desire to raise "student achievement"--in cynical campaigns that place even more pressure on UTLA members.

Our union is supposed to be the vehicle by which UTLA members can defend ourselves against these attacks, and it should also be a strong force fighting for a quality public education system that serves all students.

However, two different UTLA administrations have failed to measure up to the challenge posed by the well-funded corporate "reform" machine, which is using the economic crisis as an opportunity to accelerate the war on teachers' unions across the U.S.

Under former President A.J. Duffy, UTLA often nurtured rank-and-file organizing efforts, and it pulled off a handful of encouraging large actions against budget cuts, proliferation of charter schools, and the heavy hand of LAUSD bureaucratic mandates.

However, these organizing efforts and fightbacks were sporadic and inadequate in the face of the relentless drive for austerity. Duffy's administration finished its term trying to trade furlough days for layoffs and pilot schools--which operate under a "thin" UTLA contract, with fewer protections for teachers--for non-union charters. We ended up with furloughs, layoffs, more "thin contract" schools and more charters.

UTLA's inconsistent organizing efforts under Duffy gave way to no organizing at all under current President Warren Fletcher.

Fletcher took over in July 2011, the same time that UTLA's contract with LAUSD expired. In the 20 months since, UTLA leaders have consciously avoided opening contract negotiations with the district and have refused to mobilize UTLA members in any public resistance to Deasy's destructive agenda.

Instead, we've seen UTLA arrive at piecemeal and concessionary agreements with LAUSD on one issue at a time--from a defensive posture with no leverage and no public expression of our alternatives to the District's attacks.

THE MOST recent example of the current UTLA leadership's defensive and concessionary stance was an agreement ratified this January to introduce the use of students' standardized test scores in the evaluation process for teachers. This deal was a big concession to the demands of the corporate "reformers," who have been crusading for evaluating teachers with so-called "value-added measures" (VAM) based on test scores.

VAM systems use complex mathematical calculations that allegedly measure the gains in "student achievement" produced by each individual teacher. But independent research has consistently shown that VAM systems produce unstable and unreliable data, based on unfounded assumptions about both the validity and the causes of students' test scores. LAUSD has spent millions of dollars on outside contracts to develop its own version of VAM, which Deasy and company have re-branded with the nicer sounding name of "Academic Growth over Time" (AGT).

Through UTLA literature and communiqués, Fletcher and other UTLA officers sold the teacher evaluation agreement as a victory against the push from Deasy and his fellow "reformers" nationwide for VAM-based evaluations.

Their argument was based largely on the fact that Deasy asked for 30 percent of each teacher's evaluation to be based on AGT and other test-based "data," but the final deal mentions no percentages and states that individual AGT numbers cannot be used in a teacher's final evaluation, although schoolwide AGT calculations are permitted. Even education historian Diane Ravitch, a leading critic of the standardized testing mania and value-added measures, said that the deal in Los Angeles looked a lot better than the percentage-based VAM systems in other places like Florida, Illinois and New York.

Fletcher and other supporters of the deal also used fear to make their case. They admitted that concessions such as allowing four different variations of test score data into the "goal-setting" process of teacher evaluations was not something they wanted to do. But, they said, LAUSD and UTLA were under a judge's order to negotiate an agreement to have test scores included in some way in teacher evaluations, and if UTLA members rejected the agreement, the judge could theoretically impose something worse.

Ratifying this deal, Fletcher argued, was the only way to ensure that Deasy didn't get the 30 percent VAM/AGT-based system he wanted. PEAC and other rank-and-file groups opposed the deal, arguing that it legitimized AGT and opened the door for the district to come back and demand an even more test-driven evaluation system. Unfortunately, the agreement passed by a 2-to-1 margin among a largely frightened and disorganized UTLA membership.

Just a few weeks after the agreement on teacher evaluations was ratified, Deasy publicly "advised" LAUSD principals to go ahead and make the test score data 30 percent of evaluations--exactly what UTLA leaders told us this deal would prevent!

UTLA leaders aren't necessarily to blame for Deasy operating in this underhanded way. But they are very much to blame for allowing this to take place in a context where our options for fighting back are limited.

You can't lead a union by frightening the membership with dire warnings about how hostile the boss is--and then enter into backroom negotiations with the same hostile boss without mobilizing any public pressure, engaging the membership or exercising the leverage that comes with a credible strike threat.

This is the disastrous direction that UTLA has traveled under Warren Fletcher. Getting everyone at our schools to vote "yes" for the Initiative for the Schools LA Students Deserve is a first step to pushing for our union to change course before it's too late.