In January, teachers at Garfield High School in Seattle voted unanimously to refuse to administer the Measures of Academic Progress (MAP) test in protest over its punitive character and other reasons. Messages of solidarity started pouring in from around the country. But it wasn't clear what the response of the Seattle Public Schools would be. Would the teachers' concerns be heard, would they be disciplined, could they be fired?

This message was sent in an all-district communication blast sent at 2:06 p.m. on May 13 by Seattle Public Schools Superintendent Jose Banda, which led to spontaneous end-of-the-day celebrations by teachers and students around Garfield High School. Students fist-bumping teachers. Teachers high-fiving each other. Spontaneous assemblies in the hallway to congratulate each other.

Until now, the Measures of Academic Progress (MAP) tests were required by the Seattle school district for students in all grades (K-12). A unified group of Garfield teachers announced in January 2013 that they were no longer going to administer the tests to students at Garfield. Other Seattle schools followed suit, and the bravery of these teachers led to a national movement.

Why were Garfield teachers celebrating the discontinuing of the MAP for our students next year?

We celebrated because we know hundreds of hours of student time will no longer be wasted on a test the district has now acknowledged is inappropriate for our students. 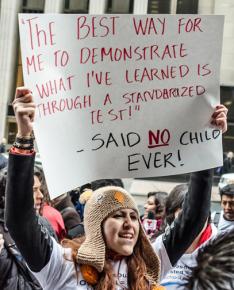 We celebrated because our English Language Learner students will no longer be humiliated by taking a test that is not culturally or linguistically appropriate, and they will now have more hours to spend on the additional instructional time they need.

We celebrated because our special education students will not have to fidget in their chairs when they strike a computer key for the MAP test that never accounted for the student's individualized education plans.

We celebrated because our students will no longer have to stare at the dull glow of a computer screen as they contemplate what possible answers they could give to questions on material that was never part of their state-mandated curriculum.

We celebrated because our evaluations would not be tied to test scores generated by bored students who have no motivation to perform well on possibly their fifth standardized test of the year. Annoyed students have been known to select "C" for each and every answer on that silly test.

We celebrated because we still have jobs we love, and because our superintendent had to back off of his original threat to suspend teachers for 10 days without pay for refusing to administer an ill-conceived test (for which the district spends hundreds of thousands of dollars each year).

We celebrated because teachers, parents and students across the country (from Austin to Boston) and around the world (from New Zealand to England) have been inspired by our resistance and are waging their own battles for quality assessment.

Perhaps most of all, we were celebrating because we are building a collaborative spirit of faculty and student solidarity at Garfield. Our students know we have their best interests at heart, and that the power of our commitment to truth can overcome the powerful.

YET WHILE teachers at five of Seattle's high schools (Chief Sealth, Center School, Ballard, Ingraham and Garfield) who joined the MAP boycott are elated by the news of this victory, Superintendent Banda's e-mail also warned that students in grades kindergarten through 8th grade will still be required to take the test next year.

Our victory, then, remains incomplete. Faculty at Orca (K-5) and Thornton Creek Elementary have raised equally powerful arguments about the flawed use of the test at the primary grade levels. Moreover, the Department of Education released results from its 2012 study, showing the MAP to be ineffective at improving reading levels for students in the fourth and fifth grades. Similarly, the Chicago school district recently announced it was suspending the MAP for grades K-5--a clear indication the MAP isn't serving the youngest pupils either.

For these reasons, Seattle's high school teachers will continue to join with our K-8 colleagues to call on the Seattle School District terminate its contract with the MAP test company at the end of this school year (when the agreement expires). The key to the victory over the high school MAP test was solidarity and widespread public support, and we intend to carry these lessons forward to change policy for K-8 schools as well.

As we both continue to build the movement to scrap the MAP and celebrate our huge victory, we shouldn't forget the answer to this year's end-of-semester exam: if we stand for what's right for students, teachers can win.