Will the U.S. hijack Syria’s revolution?

Lee Sustar analyzes the dynamics in Syria following the U.S. announcement that it will step up support for rebels fighting the Assad regime, including supplying small arms.

THE LARGEST mass revolutionary movement of the Arab Spring is under increasing pressure from outside powers, including the U.S., which want to channel the struggle for Syria's future into a sectarian war that pits the Sunni Muslim majority against Shiite Muslims and other religious minorities.

The Syrian civil war has seen at least 90,000 killed--the vast majority at the hands of the regime--and millions more turned into refugees or internally displaced.

But even worse bloodletting could be still to come. The Syrian regime of Bashar al-Assad, backed by Iran and Russia, is continuing to whip up sectarian hatred by targeting the Sunni majority and playing up fears among religious minorities. At the same time, Saudi Arabia and Qatar have funded Islamist groups linked to al-Qaeda that have an sectarian agenda of their own, targeting Syria's Shiites, Alawites, Christians, Druze and others.

Nevertheless, the grassroots movement that developed through mass protests and civil disobedience hasn't been defeated. Revolutionary civilian groups continue to run towns and communities attacked or abandoned by the regime. In the face of an increasing dynamic of militarization encouraged by foreign powers trying to shape events in Syria, these organizations are striving to exercise political control over armed groups that are increasingly subject to manipulation from abroad. 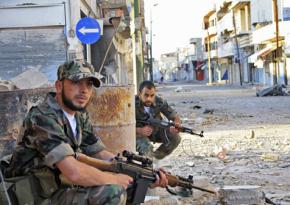 The latest foreign intervention comes from the U.S., which has okayed the supply of light weapons to the Free Syrian Army (FSA), the umbrella group of militias that is challenging the Assad regime.

Washington's move came just days after forces from Lebanon's Hezbollah helped the Syrian military to recapture the western Syrian town of Qaysr, a key point on rebel supply lines. Hezbollah is a Shiite Muslim political movement aligned with Iran, where Shiite clerics have dominated the state since the 1979 revolution. Both Iran and Hezbollah see the Assad regime as a bulwark against the U.S., Israel and the majority Sunni Muslim Arab monarchies that vie with Iran for influence in the Middle East.

The Obama administration, however, remains wary of all-out military intervention or even supplying the heavy weaponry requested by rebel forces. It is hesitant about empowering forces linked to al-Qaeda on Israel's border.

NOT SO many years ago, the U.S. was attempting to pull Syria into the U.S. orbit. John Kerry--the former senator and now Secretary of State--served as point man in that effort.

The Syrian revolution that erupted in March 2011 forced the U.S. to reluctantly reverse its stance and call for Assad's ouster. The U.S. outsourced the task of aiding the rebels to Turkey, Qatar and Saudi Arabia, but blocked the transfer of heavy arms such as anti-tank and anti-aircraft weapons, lest they end up in the hands of groups such as Jabhat al-Nusra, the al-Qaeda-linked group branded by the U.S. as terrorists.

The current U.S. perspective is to arm the rebels to keep them from being crushed by the regime--but to hold back the weapons and direct military support that could topple Assad.

Indeed, there are key players in the U.S. and Israeli military and political establishments who see the Assad regime as a lesser evil to an Islamist government in Syria--or to jihadi groups taking power in some regions if the Syrian state implodes. Thus, the headline on the website of the influential Foreign Affairs journal: "Israel's Man in Damascus: Why Jerusalem Doesn't Want the Assad Regime to Fall."

There's another complication for the U.S., too. Syria's Kurdish region is moving toward de facto independence under the tutelage of Iraq's autonomous Kurdish area--a move tolerated by the U.S. and NATO ally Turkey, which is trying to reach a peace deal with its longstanding Kurdish minority without itself conceding such autonomy.

Thus, Washington and Israel for some time pinned their hopes on a split in the Assad regime that would push out the ruling clique, but keep the Syrian state intact and bend it to Western interests.

At the same time, the U.S. has repeatedly pressed for a reshuffling of Syria's would-be leaders in exile to marginalize Islamist groups and promote wealthy businessmen and former regime elements in the Syrian National Coalition (SNC) who want to parachute into power in Damascus, backed by U.S. guns and money. Syrian revolutionary socialist Joseph Daher argues that the SNC is "ready to betray the revolution in Syria and serve the political interests and foreign countries."

The U.S.'s latest hope is Gen. Salim Idris, the top commander of the FSA. But Idris hasn't been able to attract members of Syria's military brass to join him and has failed to impose discipline on brigades linked to the FSA.

As a result, wrote Rania Abouzeid on The New Yorker website, the well-funded Islamist fighters, while a small minority among the rebel forces, are among the most effective fighters against the regime:

Jabhat al-Nusra has deep pockets (thanks in part to its affiliation with al-Qaeda in Iraq), a steady source of weapons and ammunition, and a regimental, disciplined approach to the fight that has made it among the most proficient anti-Assad groups.

The essential problem is that the FSA doesn't have the same discipline. It has never been an organized force with any top-down command and control--it's just a loose franchise outfit, little more than a term to sanitize the reality that most of the groups on the ground are independent militias that rarely take orders from the senior defectors and prominent armed civilians leading the FSA. In fact, many fighters despise the so-called leaders-in-exile who claim to speak on their behalf. Any organized relations among the armed groups are very local or ad hoc. There is often coordination in a particular town or for a certain battle, between groups that are part of the FSA as well as those outside it, but that's about it.

BECAUSE THE FSA is incoherent militarily and politically, the Saudi-Qatari intervention has greatly exacerbated the sectarian dynamic of the fighting. While they give money to different forces--the Qataris favor brigades aligned with the Muslim Brotherhood and even more extreme elements--the Islamists have attracted some popular support in Sunni areas for their fighting prowess and superior resources.

For its part, the regime has ratcheted up its own sectarianism, looking to Hezbollah for military support in what Assad portrays as a struggle against jihadist groups. The regime hopes to survive by stirring up fears in the heterodox Alawite minority--whose members hold key positions in the state. Without Assad's Baath party, the argument goes, Syria would be taken over by Sunni fundamentalists, who would slaughter not just Alawites, but Christians, Druze and Shiites as well.

Hezbollah's intervention has damaged its standing. It was seen as a heroic defender of the Arab people against Israeli aggression, most recently in the 2006 Israeli attack on Lebanon. But involvement in the Syrian civil war will change all that, as Yusef Khalil writes:

Once one of the most respected political parties, Hezbollah has now exposed itself as more committed to Assad and the regional politics of Iran, instead of the people it professes to liberate. Using up its weapons and fighters in Syria is a dream come true for American strategists who advocate a prolonged stalemate to weaken both Hezbollah and the Syrian fighters--similar to Washington's strategy to draw out the Iran-Iraq war in the 1980s.

Hezbollah's sectarianism mirrors the Muslim Brotherhood's, Saudi Arabia's and Qatar's, as all sides push the Syrian Revolution toward a sectarian civil war as a mechanism to halt and derail the revolution and prevent it from developing into a new model of resistance that challenges the hegemony of monarchies, dictatorships, Islamic republics and "official" opposition parties.

In response to Hezbollah's entry into combat in Syria, Egypt's ruling party, the Muslim Brotherhood, sponsored a conference of clerics June 13-15 that whipped up anti-Shiite sentiment and called on Egypt's fundamentalist Salafist groups to go to Syria and join the jihad against the regime. Egyptian President Mohamed Morsi himself addressed the conference and endorsed the anti-Shiite politics. As Egyptian journalist Mahmoud Salem noted:

This speech will go down in history as the speech laying the foundation of the Sunni-Zionist alliance against Iran, and also being the realization of Israeli PM Netanyahu's wildest fantasy: Egypt and Jihadists versus Iran, Syria and Hezbollah, with Israel not being a part of the equation. As one Israeli opinion writer puts it, Israel should stay out of this and "let them (Arabs) kill themselves quietly.

For now, both the backers of the Syrian regime and the opposition are trying to establish the best possible position on the battlefield in advance of a Geneva peace conference, tentatively scheduled for September.

THE MILITARIZATION of the conflict has in many places sidelined the grassroots democratic movement, which throughout 2011 organized mass protests and civil disobedience against murderous repression from Assad's security forces and hired thugs.

But it has not crushed that movement. As Peter Harling and Sarah Birke wrote in Middle East Report, despite the sectarianism and viciousness of the fighting, Syria has seen "a popular awakening of sorts, which was there from the beginning. What drove Syrians to take to the streets at huge personal cost, to help others regardless of risk, to develop a vivid culture of dissent under fire, to take up arms against such a formidable opponent and to remain in the country was the pride they took in fearing no longer--not the regime, not their compatriots, not the future."

That fearlessness has been seen again and again as the popular committees, known as the Local Coordinating Councils (LCCs), continue to run entire towns and neighborhoods, securing food and fuel, and looking after the interests of the most vulnerable.

The Syrian revolutionary website Syria Freedom Forever reports that in the city of Raqqah, liberated in March, some 42 social movements have emerged to run the city. These forces have organized protests against Jabhat al-Nusrah, the al-Qaeda-linked group that is trying to assert military control over the city. Other protests against Jihadi groups have taken place in Syria's commercial capital, Aleppo, after Islamists shot and killed a boy for allegedly making a blasphemous statement.

Mainstream reports have focused primarily on the sectarian character of the fighting and neglected the LCCs. In fact, the LCCs can be difficult to track, since they often merge and change names. Only a minority of the councils has been able to assert their authority over military brigades. Some have organized poplar militias to defend their communities.

But as Yusef Khalil argues, "winning the struggle purely by military means is highly improbable," given the regime's superior firepower. What's necessary, he argues, is a renewal of the popular movement:

The fragmentation and sectarianism brought on by the reactionary Sunni groups is helping the regime destroy the social fabric in Syria. Faced with these circumstances, the revolutionary left in Syria calls to bring the mass civil unarmed movement out of the shadows and unite it with the armed resistance under popular control. This is an enormous undertaking, since it means a simultaneous struggle against the dictatorship and against some of the well-funded reactionary Islamist groups. This is a life-or-death struggle for the Syrian Revolution.