Against intervention and for the revolution

The U.S. drive to lead a coalition of Western governments in a military strike on Syria stalled last week following a historic vote against intervention in Britain's parliament and Barack Obama's subsequent decision to seek a congressional vote supporting intervention. But likelihood of a U.S. attack remains strong in the coming week or so.

Obama and his supporters claim the planned missile strike would punish the Syrian government for using chemical weapons in a horrific attack in the Ghouta region that claimed the lives of more than 1,000 people, many of them women and children. But as it has before, the U.S. is using humanitarian concerns to justify the pursuit of its imperialist interests in a strategic region. The threatened assault is not intended to, nor will it, advance the popular uprising against Syria's dictatorship led by Bashar al-Assad.

OVER 150,000 killed, hundreds of thousands injured and disabled, millions of people displaced inside and outside Syria. Cities, villages and neighborhoods destroyed, fully or partially, using all sorts of weapons, including warplanes, Scud missiles, bombs and tanks, all paid for by the sweat and blood of the Syrian people. This was under the pretext of defending the homeland and achieving military balance with Israel (whose occupation of Syrian land is, in fact, being protected by the Syrian regime, which failed to reply to any of its continuing aggressions).

Yet despite the enormous losses mentioned above, befalling all Syrians, and the calamity inflicted on them, no international organization or major country--or lesser one--felt the need to provide practical solidarity or support to the Syrians in their struggle for their most basic rights, human dignity and social justice.

The only exception was some Gulf countries, more specifically Qatar and Saudi Arabia. However, their aim was to control the nature of the conflict and steer it in a sectarian direction, distorting the Syrian revolution and aiming to abort it, as a reflection of their deepest fear that the revolutionary flame will reach their shores. So they backed obscurantist Takfiri groups, coming, for the most part, from the four corners of the world, to impose a grotesque vision for rule based on Islamic sharia. These groups were engaged, time and time again, in terrifying massacres against Syrian citizens, who opposed their repressive measures and aggressions inside areas under their control or under attack, such as the recent example of villages in the Latakia countryside. 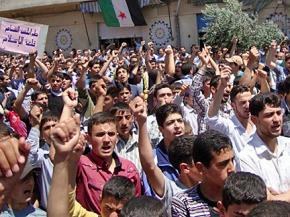 A LARGE block of hostile forces from around the world is conspiring against the Syrian people's revolution, which erupted in tandem with the uprisings spreading through a large section of the Arab region and the Maghreb for the past three years. The people's uprisings aimed to put an end to a history of brutality, injustice and exploitation, and attain the rights to freedom, dignity and social justice.

However, this not only provoked local brutal dictatorships, but also most of the imperialist forces seeking to perpetuate the theft of the wealth of our people, in addition to the various reactionary classes and forces throughout those areas and in surrounding countries.

As for Syria, the alliance fighting against the people's revolution comprises a host of reactionary sectarian forces, spearheaded by Iran and confessional militias in Iraq, and, very sadly, Hezbollah's strike force, which is drowning in the quagmire of defending a profoundly corrupt and criminal dictatorial regime.

This unfortunate situation has also struck a major section of the traditional Arab left with Stalinist roots, whether in Syria itself or in Lebanon, Egypt and the rest of the Arab region--and worldwide--which is clearly biased toward the wretched alliance surrounding the Assad regime. The justification is that some see it as a "resilient" or even a "resistance" regime, despite its long history--throughout its existence in power--of protecting the Zionist occupation of the Golan Heights, its constant bloody repression of various groups resisting Israel, be it Palestinian or Lebanese (or Syrian), and remaining idle and subservient, since the October 1973 war, concerning Israel's aggressions on Syrian territories. This bias will have serious ramifications on ordinary Syrians' position regarding the left in general.

The United Nations and its the Security Council, in particular, were unable to condemn the crimes of a regime which the Syrian people rejected continuously and peacefully for more than seven months, while the bullets of the snipers and shabbiha took demonstrators one by one and day after day, and while the most influential activists were being detained and subjected to the worst kinds of torture and elimination in the prisons and detention centers. All the while, the world remained completely silent and in a state of total negativity.

The situation persisted with small difference after the people in revolution decided to take up arms and the emergence of what became known as the Free Syrian Army (FSA)--whose command and soldiers came, to a large extent, from the regular army. This led to the horrific escalation of crimes by the regime.

Russian imperialism, the most important ally of the Baathist regime in Damascus, which provides it with all sorts of support, remains on the lookout to block any attempt to condemn those crimes in the Security Council. The United States, on the other hand, does not have a real problem with the continuation of the status quo, with all the apparent repercussions and destruction of the country. This is despite the threats and intimidation of the U.S. president every time someone in the opposition raises the question of the use of chemical weapons by the regime--up to the latest escalation, when it was considered crossing a "red line."

It is clear that Barack Obama, who gives the impression that he will go ahead with his threats of military intervention, would have felt great embarrassment if he did not make these threats, since it would not only impact negatively on the president, but also on the image of the mighty and arrogant state that he leads in the eyes of subservient Arab countries and the entire world.

The imminent strike against the Syrian armed forces is led by the U.S. However, it occurs with the understanding and cooperation of allied imperialist countries, even without rationalizing it through the usual farce, known as international legitimacy (namely the decisions of the UN, which was and remains representative of the interests of major powers, whether in conflict or in alliance, depending on the circumstances, differences and balances among them). In other words, the strike will not wait for the Security Council due to the anticipated Russian-Chinese veto.

Unfortunately, many in the Syrian opposition are gambling on this strike and the U.S. position in general. They believe this would create an opportunity for them to seize power, skipping over the movement and of the masses and their independent action. It should not be a surprise, then, that the representatives of this opposition and the FSA had no reservations on providing information to the U.S. about proposed targets for the strike.

IN ALL cases, we agree on the following:

The Western imperialist alliance will strike several positions and vital parts of the military and civilian infrastructure in Syria (with several casualties, as usual). However, as it was keen to announce, the strikes will not be meant to topple the regime. They are merely intended to punish, in Obama's words, the current Syrian leadership and save face for the U.S. administration, after all the threats concerning the use of chemical weapons.

The U.S. president's intentions to punish the Syrian leadership does not stem, in any way, shape or form, from Washington's solidarity with the suffering of children who fell in the Ghouta massacres, but from its commitment to what Obama calls the vital interests of the U.S. and its homeland security, in addition to Israel's interests and security.

The Syrian army and its regional allies, led by the Iranian regime, will not have enough courage, most probably, to fulfill what seemed to be threats by their senior officials that any Western attack on Syria would ignite war in the entire region. But this option remains on the table, as a final alternative, with catastrophic results.

The imminent Western imperialist assault is not intended to support the Syrian revolution in any way. It will aim to push Damascus to the bargaining table and allow Bashar al-Assad to retreat from the foreground, but keeping the regime in place, while greatly improving conditions to strengthen the position of U.S. imperialism in the future Syria against Russian imperialism.

The more those participating in the continuing popular mobilization--who are more aware, principled and dedicated to the future of Syria and its people--realize these facts and their consequences and results, and act accordingly, the more this will contribute to aiding the Syrian people to successfully pick a true revolutionary leadership. In the process of a committed struggle based on the current and future interests of their people, this would produce a radical program consistent with those interests, which could be promoted and put into practice on the road to victory.

No to all forms of imperialist intervention, whether by the U.S. or Russia.

No to all forms of reactionary sectarian interventions, whether by Iran or the Gulf countries.

No to the intervention of Hezbollah, which warrants the maximum condemnation.

Down with all illusions about the imminent U.S. military strike.

Break open the arms depots for the Syrian people to struggle for freedom, dignity and social justice.

Victory to a free democratic Syria and down with the Assad dictatorship and all dictatorships forever.